The latest forecast track from the Central Pacific Hurricane Center brings the center of Lane dangerously close to the Hawaiian Islands during the Thursday through Saturday time frame, August 23 to 25. Regardless of the exact track of the storm, life-threatening impacts are likely over many areas as this strong hurricane makes its closest approach. All individuals in Hawaii are urged not to focus on the exact forecast track or intensity of Lane, and be prepared for adjustments in future forecast updates. Although the official forecast does not explicitly indicate Lane's center making landfall over any of the islands, this could still occur, CPHC said. Outer rain bands and embedded thunderstorms associated with Hurricane "Lane," are already producing heavy rainfall and flash flooding on the Big Island.

Hawaii officials have warned residents that there will not be enough shelter space for everyone during the passage of Hurricane "Lane."

All those who can fortify their homes are asked to do so and stay there. However, residents in flood zones should not stay home during the storm; they should find another place to go.

"We do not have enough shelters for everyone," Tom Travis, head of Hawaii's Emergency Management Agency, said. "If you're not in a flood zone, most citizens should remain in their homes. If you are in a flood zone, you should actively seek shelters elsewhere."

According to a report issued earlier this year, there are only 277 376 available shelter spaces in the entire state. Hawaii has 1.4 million residents, not taking into account the tourists visiting the state.

Regardless of the exact track of the storm, llife-threatening impacts are likely over many areas as this strong hurricane makes its closest approach. All individuals in Hawaii are urged not to focus on the exact forecast track or intensity of Lane, and be prepared for adjustments in future forecast updates. Although the official forecast does not explicitly indicate Lane's center making landfall over any of the islands, this could still occur. 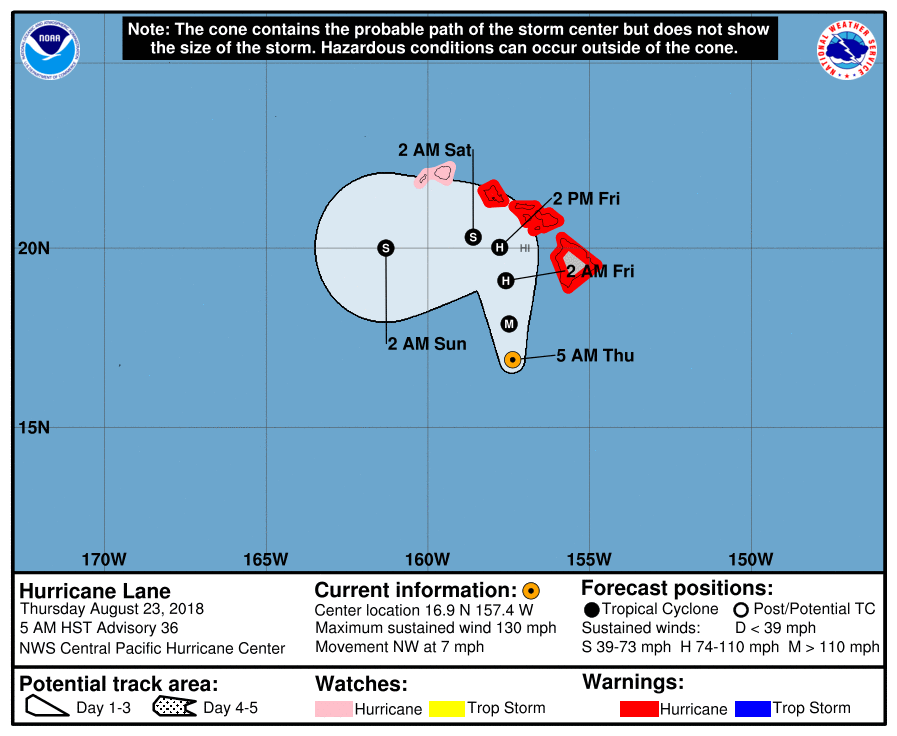 A Hurricane Warning is in effect for Oahu, Maui County (including the islands of Maui, Lanai, Molokai and Kahoolawe), and Hawaii County.

A Hurricane Warning means that hurricane conditions are expected somewhere within the warning area. A warning is typically issued 36 hours before the anticipated first occurrence of tropical-storm-force winds, conditions that make outside preparations difficult or dangerous. Preparations to protect life and property should be rushed to completion.

A Hurricane Watch is in effect for Kauai County, including the islands of Kauai and Niihau.

Interests in the Northwestern Hawaiian Islands should monitor the progress of Hurricane "Lane".

Outer rain bands and embedded thunderstorms associated with Hurricane "Lane," are already producing heavy rainfall and flash flooding on the Big Island. Bands of intense showers and thunderstorms will continue to spread across the other islands from south-southeast to north-northwest tonight through Friday.

Excessive rainfall is likely which could result in life threatening flash flooding, as well as landslides and mudslides. Flooding from these heavy rains will also be possible in areas that are typically not prone to flooding. Storm total rainfall amounts greater than 762 mm (30 inches) are possible.

Tornadoes and large waterspouts will be possible with Lane, mainly along and to the right of the track of the hurricane. 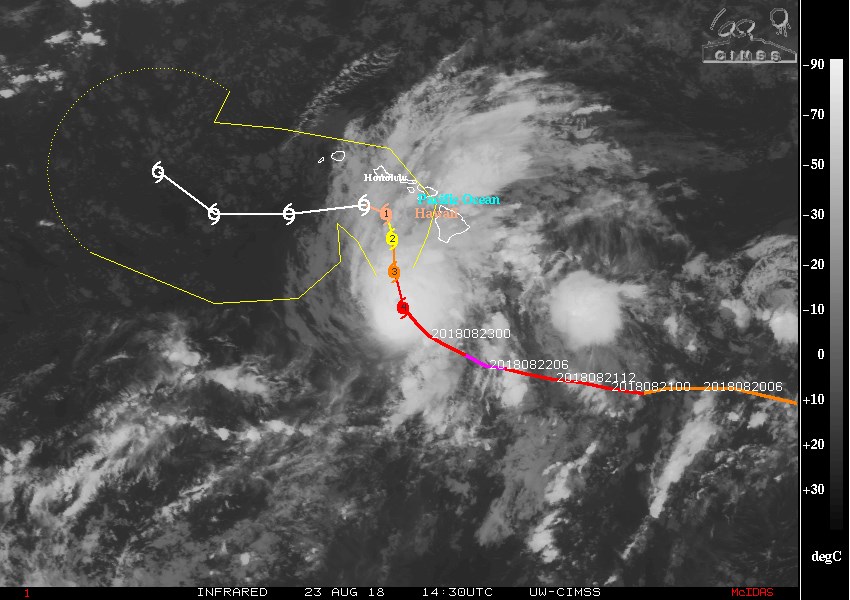 Protect against life-threatening rainfall flooding having possible devastating impacts across the Hawaiian islands.

Protect against life-threatening wind having possible extensive impacts across Maui County, Oahu, and western and southern sections of the Big Island.

Potential impacts in this area include:

Also, protect against dangerous wind having possible significant impacts across the northern and eastern sections of the Big Island and Kauai.

Protect against life-threatening surge having possible significant impacts across southeast, south and southwest facing coastlines. Potential impacts in this area include:

Elsewhere across the Hawaiian islands, little to no surge impact is expected at this time.

Protect against a tornado event having possible limited impacts across the Hawaiian islands. Potential impacts include:

Listen to local official for recommended preparedness actions, including possible evacuation. If ordered to evacuate, do so immediately.

If evacuating, leave with a destination in mind and allow extra time to get there. Take your emergency supplies kit. Gas up your vehicle ahead of time.

Let others know where you are going prior to departure. Secure loose items and pets in the car, and avoid distracted driving.

Do not enter evacuated areas until officials have given the all clear to return.

Now is the time to complete all preparations to protect life and property in accordance with your emergency plan. Ensure you are in a safe location before the onset of strong winds or possible flooding.

If you are relocating to safe shelter, leave as early as possible. Allow extra time to reach your destination. Many roads and bridges will be closed once strong winds arrive. Check the latest weather forecast before departing and drive with caution.

Failure to adequately shelter may result in serious injury or loss of life. Always heed the advice of local officials and comply with any orders that are issued. Remember, during the storm 9 1 1 Emergency Services may not be able to immediately respond if conditions are unsafe. This should be a big factor in your decision making.

Keep cell phones well charged. Cell phone chargers for automobiles can be helpful, but be aware of your risk for deadly carbon monoxide poisoning if your car is left idling in a garage or other poorly ventilated area.

It is important to remain calm, informed, and focused during an emergency. Be patient and helpful with those you encounter.

If you are a visitor, be sure to know the name of the city or town in which you are staying and the name of the county or parish in which it resides. Listen for these locations in local news updates. Pay attention for instructions from local authorities.

Rapidly rising flood waters are deadly. If you are in a flood-prone area, consider moving to higher ground. Never drive through a flooded roadway. Remember, turn around don't drown!

If in a place that is vulnerable to high wind, such as near large trees, a manufactured home, upper floors of a high-rise building, or on a boat, consider moving to a safer shelter before the onset of strong winds or flooding.

Closely monitor weather.gov, NOAA Weather radio or local news outlets for official storm information. Be ready to adapt to possible changes to the forecast. Ensure you have multiple ways to receive weather warnings.