At least 8 people were killed and over 100 injured as massive storms dumped heavy rain and large hail on parts of Bangladesh, Nepal, Bhutan and India on March 30, 2018. Crops and hundreds of homes were badly damaged in Bangladesh and in Rautahat area in Nepal.

Two people died in Rangpur division while one in Dinajpur division in Bangladesh, according to Department of Disaster Management control room officer Kamrun Nahar. Another victim was in Bhabanipur village, Bhairab Police Station’s inspector Mohammad Ali Zinnah told, according to New Age Bangladesh.

It is not yet confirmed if the victims were hit by hailstorm or thunderbolt.

Hailstorm coupled with rain lashed Panchagarh and Nilphamari districts on Friday, damaging different crops and fruits on vast tracts of land. In Panchagarh, violent hailstorm that swept a number of villages in Sadar Upazila badly damaged mango and litchi buds and different crops.

Local people said that the hailstorm that struck early in the morning and ended around 03:00 UTC (09:00 local time) also damaged hybrid tomatoes and watermelons during its fury.

Nuruzzaman, a farmer at Haribhasa union, said he cultivated hybrid tomatoes and watermelons, but they were totally destroyed. ‘I've lost all of my capital,’ he said.

Azizar Rahman, a farmer at Chaklahat, said most of the buds of litchis and mangoes were damaged as the hailstorm lashed the area.

Local agriculture office has recorded 37mm (1.45 inches) of rain in Sadar Upazila. Upazilas are geographical regions in Bangladesh used for administrative or other purposes.

Officials at the Department of Agricultural Extension visited the affected areas to assess the extent of losses, said Shamsul Haque, deputy director of district DAE office.

The electricity supply also remained suspended in the district till 11:00 UTC (17:00 local time) following the hailstorm.

The power supply was disrupted for several hours as tree branches fell on the electric lines on Sayedpur-Nilphamari road due to the storm, according to Abu Sayed, executive engineer of North West Power Distribution Company.

The hailstorm damaged crops in two northern districts of Lalmonirhat and Thakurgaon and surrounding areas.

A number of houses along with trees were also damaged when the storm hit over hundreds of villages in the Upazilas on Friday morning.

The storm began at 04:00 UTC (10:00 local time) and ended around noon in the area, according to the locals. However, no casualties were reported.

"Big hailstones damaged roofs of many houses and flattened crops," chairman of Mogolhat union of Lalmonirhat's Sadar Upazila Habibur Rahman told bdnews24.com, adding that he had never seen such a strong hailstorm in my life.”

The local administration is yet to estimate the losses caused by the storm.

Bidhubhushan Roy, Deputy Director of Lalmonirhat Agriculture Extension Department, said the storm swept over the area, wreaking havoc on crops. “The scale of damage will be estimated once all information is gathered.”

Farmer Sirajuddin, a resident of Bokserhat village in Thakurgaon, said “I sowed maize and wheat on 10 bighas of land. The harvesting time was just a few days away, but now the crops have been damaged.”

Another farmer Altaf Hossain, a resident of Akhanagor union, said the hailstones and rain damaged his mango and litchi trees on five bighas of land. Some trees were also uprooted by the storm, he said.

In Nepal, a massive hailstorm severely damaged crops and tiled roofs of more than 200 houses in many villages in Rautahat region.

People in the mid-region of Rautahat suffered damage due to the hailstorm of enormous magnitude that hit the region at a time when the locals had started recuperating from the deteriorating conditions caused by the devastating flood last monsoon.

The hailstones have completely damaged crops including wheat, red gram, mangoes, vegetables, according to District Agriculture Development Office Chief Raj Naraya Yadav. The hailstorm has damaged crops worth millions of rupees, he said.

It would take some days to work out the loss incurred in the catastrophe, the Rautahat District Police Office informed.

Images of #hailstorm in #rautahat #nepal

Despair to most who were reeling from #2017 floods and winter

This tweet does nothing – just shows the impacts #howtohelp#March #Agriculture pic.twitter.com/MfgqjvGHe4 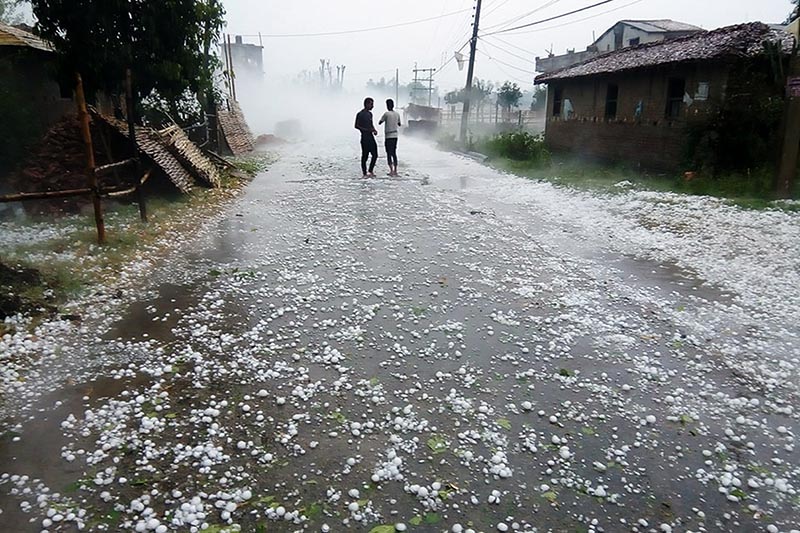 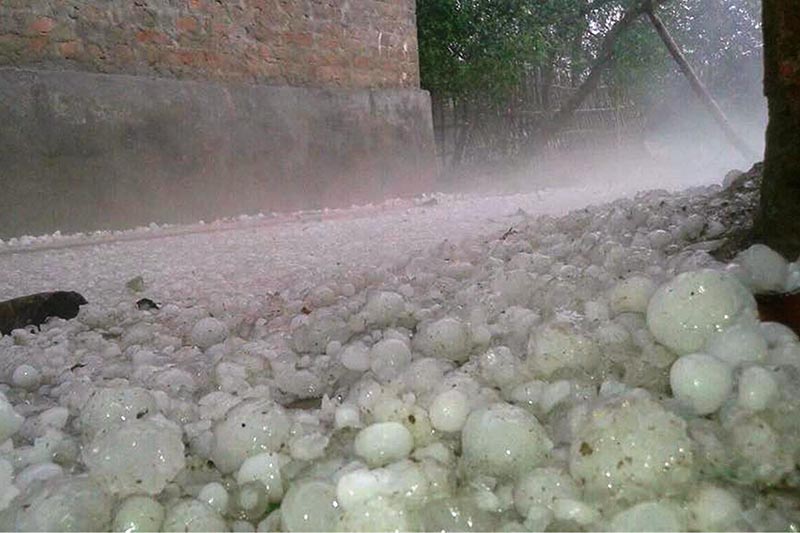 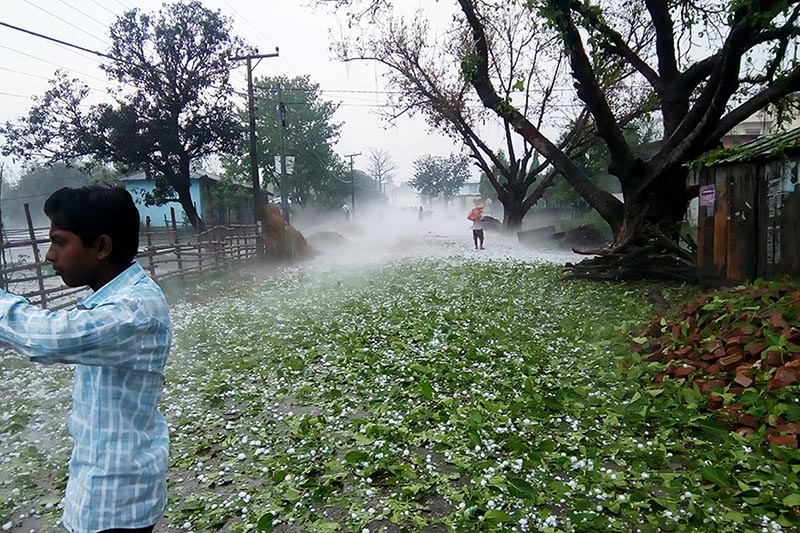 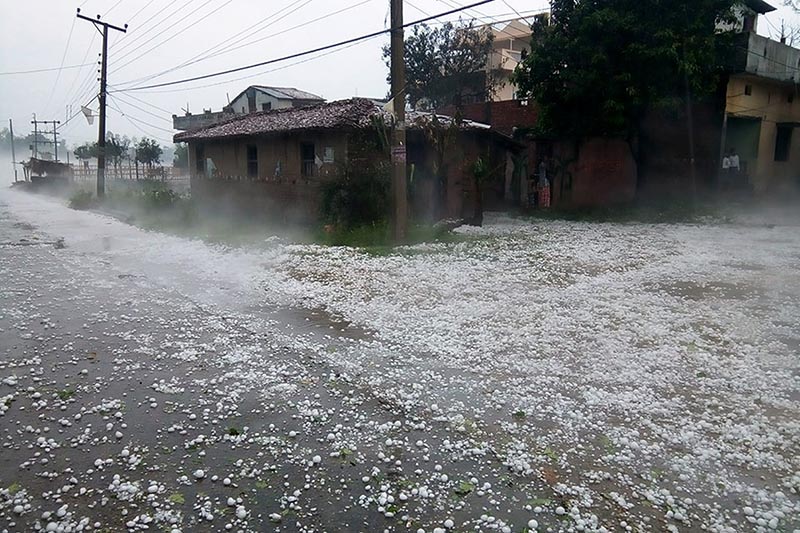 No casualties or injuries have been reported.

Preliminary disaster assessment report found damage in three gewogs of Shompangkha, Dekiling, and Gakidling. Shompangkha is the most affected gewog.

Roofs of six houses were blown away and over 10 poultry farms were damaged. The disaster left over 400 poultry birds, six goats, and a cow dead.

“We’re yet to complete assessment,” he said to Kuensel News.

Roofs of at least four houses were blown away in Gakidling gewog. Huge hailstones got in through the sheets in two houses.

In Darjaythang the windstorm blew away the roof of the kitchen and rainwater flooded the rooms.

Durga Devi Acharya said that the family was just about to eat when the storm struck and blew away their plates.

“All our belongings are drenched,” she told.

Some areca nut trees were damaged in Dekiling gewog.

Dzongdag Karma Galay said that since the disaster struck in the afternoon and lasted for a few hours, damage assessment is yet to be completed. 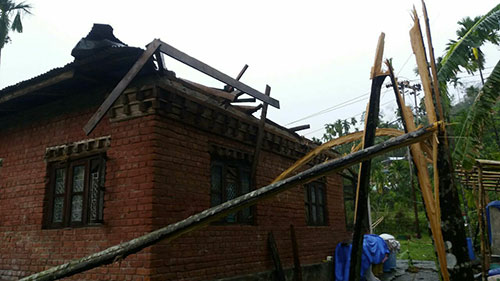 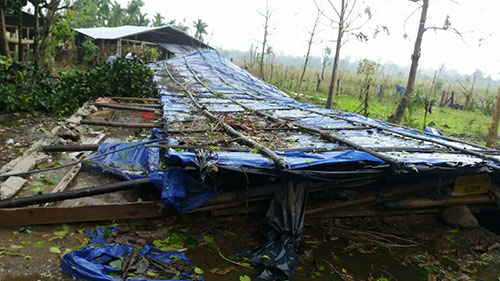 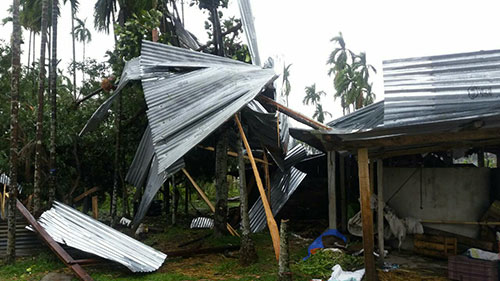 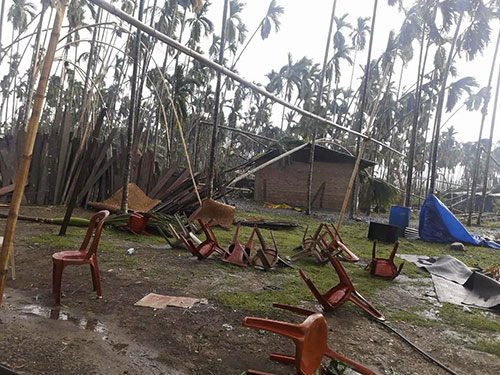 Hail and heavy rain accompanied by lightning killed at least 3 and injured over 50 during Ram Navami celebrations at the historic Kodandarama Swami Temple, located in Vontimitta of Kadapa district, Andhra Pradesh, India. Thousands of devotees from across the state were gathered to celebrate the annual Ram Navami fete.

Devotees in huge number thronged the Kalyanam place on the evening of March 30. Suddenly gale winds coupled with hailstorm started at 12:15 UTC (18.15 local time) and continued till 12:45 UTC (18:45 local time) where trees and electric poles uprooted, sheds collapsed. People were having difficulties to take shelter as thousands of people tired to escape disastrous winds and hail. Many people were injured and children were found to be missing in the chaotic circumstances.

Chief Minister Chandrababu Naidu along with his colleagues was also participating in the annual celebration when a pandal and other temporary structures collapsed due to thunderstorm and wind. Minister had to be confined to the guest house as the security staff warned him not to move during the thunderstorm.

While those injured were rushed to local hospitals, rescue operations – directly monitored by the Chief Minister – were still on.