As of 12:00 CDT on June 17, about 36 000 homes were still without power, the Omaha Public Power District said. Those still affected by power outages include more than 10 000 households in Douglas County, about 18 000 households in Sarpy County and about 4 600 in Cass County, Omaha World-Herald reported.

WATCH: From the air the storm damage is clear. Devastation in the Hyda Hills neighborhood, leaving several families without a home. pic.twitter.com/RRMPRurdJK

At the same time, the City of Bellevue reported that the Bellevue Police Department and the Sarpy County sheriffs department have restricted access to the southwest area of the community including the Hyda Hills, Two Springs and Piper Glenn neighborhoods. If you do not live in these areas please stay away and allow emergency and cleanup crews access to the neighborhoods that have suffered significant damage from last nights storm.

In their storm update issued 08:30 CDT, the City said OPPD continues to urge caution around impacted areas, as there are many reports of downed lines and lines tangled amongst the downed tree limbs. Always stay away from downed lines, as they could be live and high voltage.

According to the Omaha World-Herald, Sarpy County appears to have taken the brunt of the tree and structural damage. Power outages were reported throughout the metro area, though the southern sections also had power poles as well as lines down.

Significant damage was reported to parts of Offutt Air Force Base, it added, including to various facilities and homes. Officials said much of the base remains without power as crews clear roads of downed tree limbs and power lines. Base officials ask that only mission-essential personnel come to the base at this point; full access will return when roads are cleared.

Houses in the Hyda Hills neighborhood of Bellevue near 23rd Avenue and Platteview Road were hit particularly hard. Numerous homes have holes in the sides. Soaked insulation lay in the street. Several roofs are torn off homes, and debris is scattered around the neighborhood.

According to preliminary NWS reports, Bellevue was hit by at least 2 tornadoes on June 16, EF-1 and EF-2.

The first tornado (EF-2) likely developed in the Two Springs subdivision in Bellevue, moving east-southeast affecting Pipers Glen, then Hyda Hills, and Normandy Hills, then crossed the Missouri River and dissipated before reaching Glenwood. "EF2 damage was noted along the path in Hyda Hills, with EF0 to EF1 damage elsewhere along the path. Substantial home damage was noted along some of the path. This information is very preliminary and will be further refined in the next few days as additional survey information becomes available," NWS said.

"The tornado developed just west of Offutt Air Force Base and moved east-southeast across the air force base property, dissipating before reaching the Missouri River. Damage to trees and buildings was noted," NWS said. 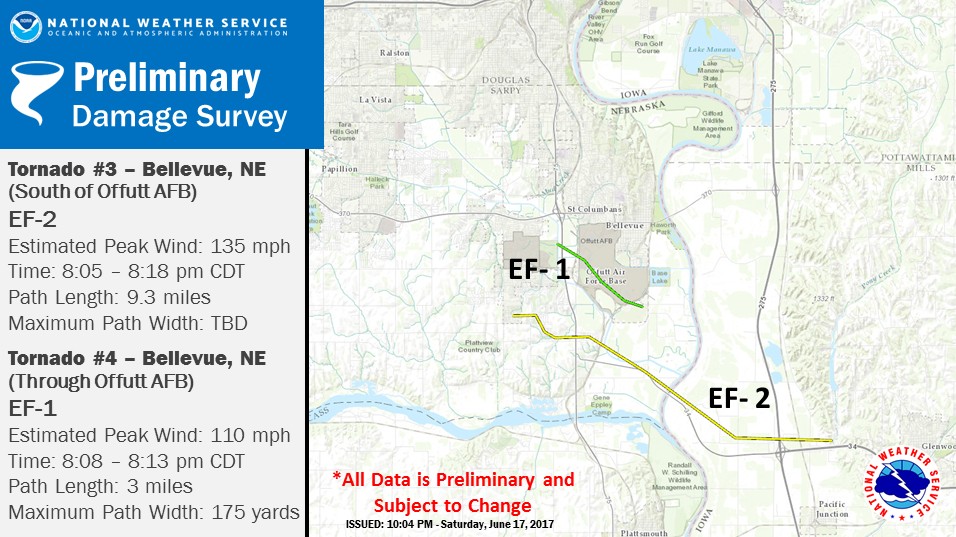 The storm now ranks as the 4th worst in the history of OPPD.

OPPD said it hopes to have most power restored by June 19, though about 1 500 customers may not have the lights back on until Wednesday.