After hitting New Caledonia with strong winds and heavy rain, Tropical Cyclone "Cook" has undergone extratropical transition but what's left of it is still very potent and is now moving toward New Zealand landfall. Over the past several weeks the country has already seen huge amounts of rain and is under a strong influence of a low which is moving west of the South Island, directing a moist and unsettled northeasterly airstream over New Zealand, ahead of the cyclone. MetService warns Ex-tropical Cyclone "Cook" is expected to make landfall Thursday afternoon (local time) describing the event as 'very significant and likely to produce widespread flooding, slips and wind damage.'

This is an extremely serious weather event, authorities warn. Do not take it lightly, put safety first.

Heavy rain is now falling over parts of the country and is expected to continue into Thursday, April 13 when Ex-tropical Cyclone "Cook" is expected to make landfall over the Coromandel Peninsula or western Bay of Plenty, MetService warns. Cook is then expected to move southwards reaching Wellington in the early hours of Friday morning.

Meteorologists are worried people in New Zealand are taking this storm lightly and have repeatedly warned this is an extremely serious weather event. "I have never seen an event like this in the 12 years I have been a forecaster in New Zealand… this is not an event to be taken lightly," MetService forecaster Lisa Murray said today.

Cook could bring the same intensity as the storm Tropical Cyclone "Giselle" that contributed to the sinking of the Lyttelton-Wellington ferry Wahine in Cook Strait on the morning of April 10, 1968. On that sad day, 53 people died after the ferry was dragged along jagged rocks at the entrance to Wellington Harbour during the ferocious storm.

Our super high-resolution 1.5 km model shows #CycloneCook and its associated heavy rain bands as it approaches the North Island on Thursday. pic.twitter.com/AcCuuJl0OO

"On the current track, damaging severe gales with gusts of 150 km/h (93 mph) or more are possible, affecting regions from Auckland to Coromandel Peninsula and Bay of Plenty, down to Wellington. Eastern coastal areas of Auckland, Coromandel Peninsula, and Bay of Plenty may see large waves of 5 meters (16.4 feet) or more, storm surges near the center of Cyclone Cook, coastal inundation and erosion," the service said and added that the precise track of the Cyclone center may change as the system approaches.

"People should be aware that this is a very significant event and is likely to produce widespread flooding, slips and wind damage, including to power lines and may even lift roofs and bring down large trees. Driving conditions are likely to be hazardous, so people will need to take extra care on the roads, and even consider altering their Easter travel plans." 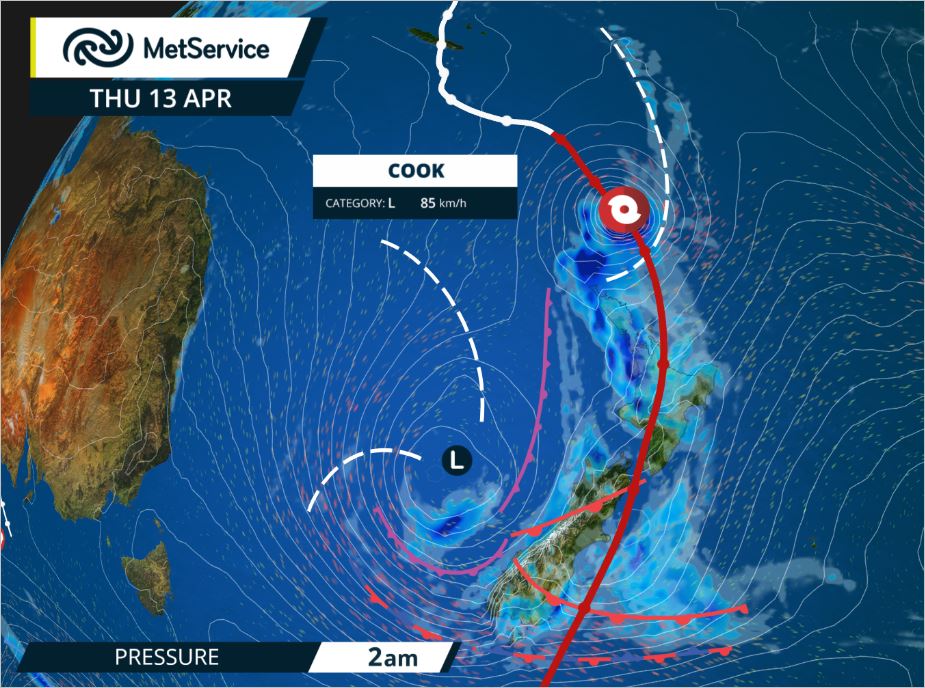 "With soils across much of the North Island already saturated, the risk for flooding this week will be higher as the ground will be unable to absorb additional rainfall," NIWA said. "Storm total rainfall amounts (Wednesday-Friday) may range from 100 to 250 mm (3.9 – 9.8 inches) with locally higher amounts possible in the hardest hit areas, although significant variation is likely across the North Island."

The Bay of Plenty region went into a state of emergency on Tuesday night in preparation for Cook's arrival. Officials have advised 57 schools in the region to close while pumping as much water out of already-flooded areas as possible. 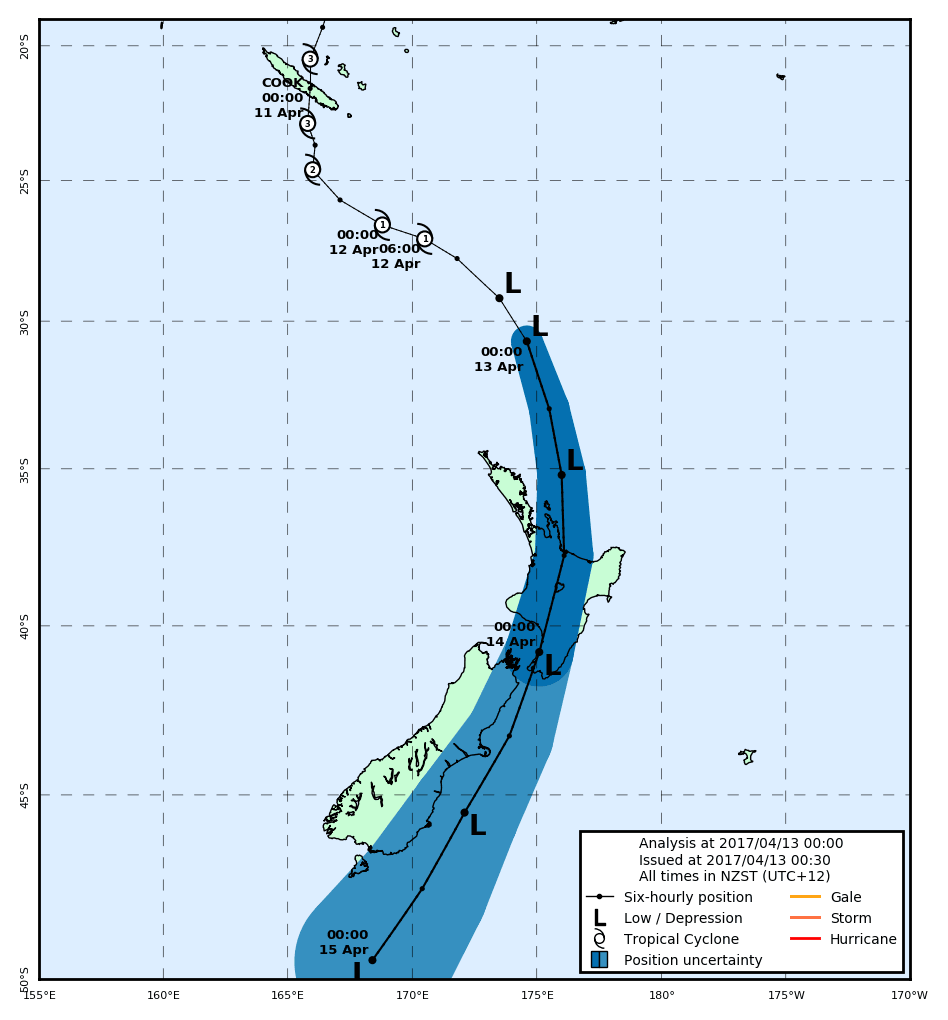 After landfall, the system is expected to head toward Wellington, cross over it early Friday morning (local time) and then move rapidly southwards to pass east of Otago Friday afternoon.