A violent low pressure system brought heavy rain to Melbourne and other parts of Victoria, Australia on December 29, 2016, causing flash flooding and havoc across the region.

The storm hit around 15:00 local time, after a hot and humid summer day and one of the hottest nights on record for Melbourne. With a temperature of 27 °C (80.6 °F) it was the hottest overnight temperature in Melbourne this year. 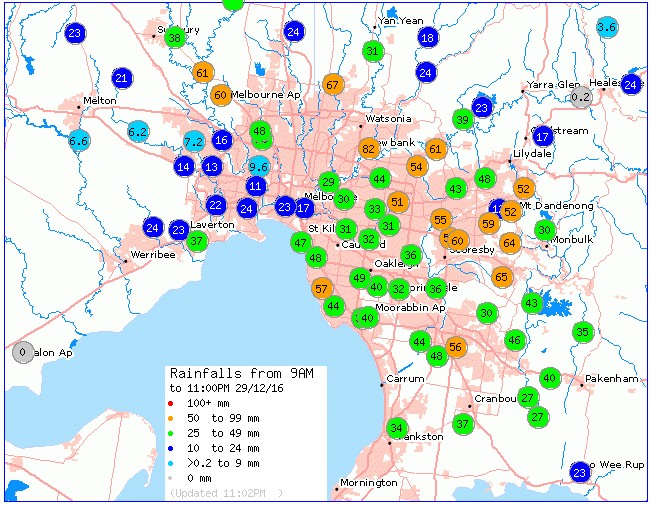 A major flood warning has been issued for Elsternwick Creek, Elwood Canal in Melbourne's south-east with residents warned they may need to evacuate, The Age reported.

Elwood Canal full to the point of bursting, warning messages from the SES in phone, be safe out there #melbourneweather pic.twitter.com/6uj9qGT0Xg

A series of storms have also struck holidaymakers on the Mornington and Bellarine peninsulas and in the outer north-west and south-east suburbs of greater Melbourne.

The SES has said they received more than 1 500 calls for assistance since midnight. Most of them for flooding and roof damage. A number of people had to be rescued from their cars.

A severe weather warning for heavy rain and thunderstorms is still current for Melbourne as the low pressure trough moves across the state slowly.

"Some of these could be really fast forming [rain] cells where you look three hours before and think I know where the rain is on the radar, it could change dramatically in a matter of hours the way the weather might form up this afternoon," he told 774 ABC Melbourne.