At 02:39 UTC today, KVERT reported that a major eruption took place at Zhupanovsky volcano with ash plume, according to video data, observed up to 7 – 8 km (23 000 – 26 000 feet) above sea level. Ongoing activity could affect international and low-flying aircraft, it warned.

The Tokyo VAAC transferred the responsibility of this event to Anchorage VAAC, who noted at 06:02 UTC that there was a strong signal in satellite imagery associated with a fast-moving volcanic ash plume. 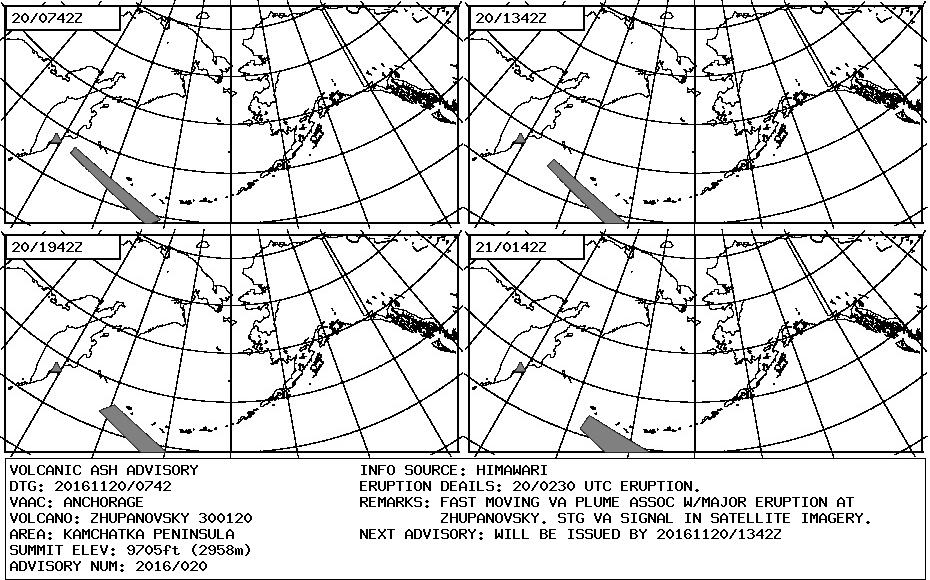 The last time this volcano erupted was on March 24, 2016. The last thermal anomaly detection in a satellite image was on April 1.

The Aviation Color Code for Zhupanovsky was lowered to Green on June 16.

An early Holocene stage of frequent moderate and weak eruptions from 7000 to 5000 years before present (BP) was succeeded by a period of infrequent larger eruptions that produced pyroclastic flows. The last major eruption took place about 800-900 years BP. Historical eruptions have consisted of relatively minor explosions from the third cone. (GVP)