The UK Met Office has named the first autumn storm of the season. Storm "Angus" will lash southeastern England with heavy rainfall and intense southwesterly winds on November 20, 2016.

As the strong low-pressure field, a Yellow warning for strong winds and heavy rainfall was, at first, issued for November 20, for the region between Dorset and Suffolk. However, the system has intensified since, and an Amber warning for severe gales in the area of southeastern England, between the Isle of Wight and Kent, was put into effect at 10:45 on November 19 (local time). 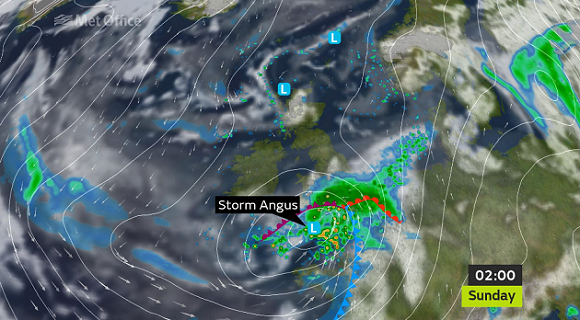 Wind gusts between 112.6 and 128.7 km/h (70 and 80 mph) will likely affect the coastal areas within the Amber warning area. Traffic disruptions, power outages and some damage to local buildings are expected.

“Storm Angus is developing rapidly and will move northeast across southern and southeast England during Sunday morning. Southerly then southwesterly gales are likely with storm force winds developing over the English Channel and affecting some coastal districts. Very squally showers are also expected such that isolated gusts of 70-75 mph are also possible further inland in the Amber warning area,” said Andy Page, the Met Office Chief Meteorologist.