The Alban Hills (Colli Albani/Monte Albano), a 15-km (9-mile) semicircle of hills outside Rome, Italy was previously considered an extinct volcano. However, a new study finds the volcano operates on a 31 000-year cycle of eruption and dormancy and is now starting a new eruptive cycle. The eruption, expected in the next 1 000 years, could generate massive, far-reaching clouds of smoke and ash, and send rocks raining on nearby cities, according to study authors.

In recent years, scientists have observed new steam vents, earthquakes and a rise in ground level in the hills and the surrounding area. These observations, along with new evidence of past eruptions and satellite data, indicate Colli Albani is starting a new eruptive cycle. Previous research shows that in past eruptive cycles the volcano unleashed both low blasts of hot ash and lava that rolled down the volcano’s slopes at tremendous speeds.

Fabrizio Marra, a volcanologist at the National Institute of Geophysics and Volcanology in Rome and lead author of the new study, said: "The remains of Colli Albani’s ancient eruptions suggest that under the right circumstances the volcano has the potential to be as destructive as Mt. Vesuvius, which destroyed Pompeii in 79 A.D."

The center of Rome is about 30 km (19 miles) away from Colli Albani and would only be severely affected by the eruption if the wind blew in the right direction, but the city’s suburbs reach all the way to the base of the volcano and could be devastated by the event, Marra said.

Although a massive eruption of Colli Albani is not likely for another millennium, Marra said he hopes the new research is a wake-up call for closer monitoring of the volcano, AGU reports. 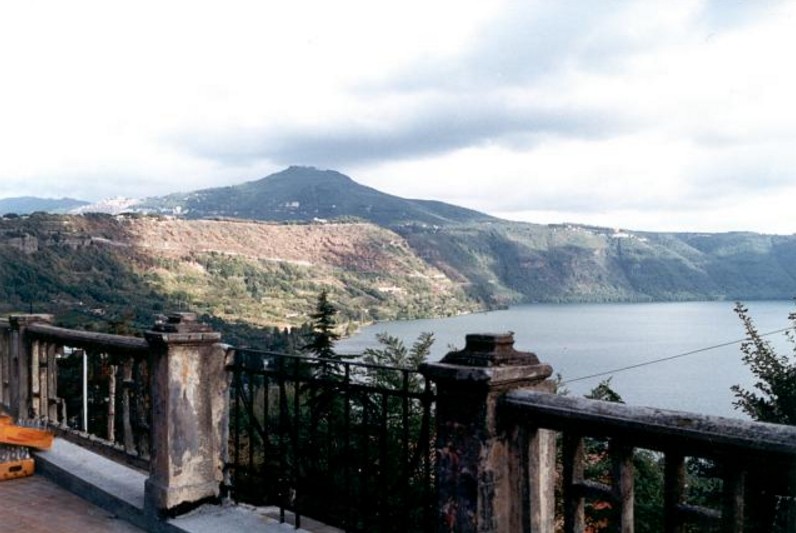 Lake-filled Albano maar is part of the Alban Hills (Monte Albano) complex immediately SE of Rome. The Cavo scoria cone rises beyond the far rim. The Monte Albano complex contains a large Pleistocene stratovolcano with a 10-km-wide caldera. Subsequent eruptions occurred from a new 5-km-wide central cone and from many phreatomagmatic craters and cones within the caldera and on its outer flanks. The youngest dated magmatic eruption occurred during the late-Pleistocene, but the possibility of Holocene phreatic eruptions has not been excluded. Photo by Ichio Moriya (Kanazawa University).

According to the Global Volcanism Program (Smithsonian/USGS), a large, 10 x 12 km (6.2 x 7.45 miles) wide, caldera of the Colli Albani complex, formed during an eruptive period with six major explosive eruptions producing at least 280 km3 of ejecta between about 560 000 and 350 000 years ago. Reported historical eruptions during the Roman period are uncertain, but seismic swarms of up to two years duration have been recorded since Roman times.

Geologists began to suspect something was happening around Colli Albani 20 years ago when they noticed the hills had risen unexpectedly. In volcanic regions, this usually means a bubble of magma is forming beneath the surface, pushing the ground upward. An earthquake swarm, which shook Rome from 1991-1995, plus the recent appearance of a steam vent near Rome’s international airport, sparked an investigation into the area’s potential danger.

In the new study, scientists determined the age of rocks from past eruptions and studied satellite images of the land around Colli Albani to determine its eruptive history. The study also found that rather than being extinct, the volcano operates on a 31 000-year cycle of eruption and dormancy.

The volcano’s cyclical nature is due to the unusual underlying geology of the region, Marra said. Periodically, a giant “bubble” of pressurized magma forms under Earth’s crust, forcing its way upwards into a fracture between two pieces of land. At Colli Albani, two pieces of land forming the fracture above the magma bubble are being pressed together by the surrounding geology, keeping the magma bubble from erupting.

The most visible sign of this magma bubble is an increase in height of the hills and the surrounding area as the bubble pushes up from underneath the ground. Over the last 200 000 years, the land around Colli Albani has risen by 50 meters (164 feet) as magma bubbles form and vanish, the team estimates. The land is continuing to rise more than 2 millimeters (0.8 inches) a year, indicating the underground bubble of magma is likely still growing, according to the study’s authors.

The new study finds the fracture keeping the magma bubble underground has changed over the last 2 000 years. Now, instead of the land being pushed together, the two pieces are sliding against one another. When the land shifts, the pressure over the bubble is released and the magma has the opportunity to erupt to the surface—which is what the study’s authors suspect is happening now.

The volcano last erupted 36 000 years ago, meaning Colli Albani is overdue for an eruption, but Rome is not in any immediate danger, Marra said.

Although the area is showing signs of volcanic activity, he estimates the next serious eruption isn’t likely to occur for another 1 000 years and will be preceded by more moderate volcanic activity—the formation of a cone, for instance.

“We expect for sure some initial stages which may not be so explosive, but it may evolve in time,” he said.