Extreme rainfall in Haiti caused severe flooding that resulted in the deaths of at least 5 people over the past several days. In the neighboring Dominican Republic, over 3 400 people were evacuated.

Both countries have already seen several rounds of severe weather and flooding before heavy rains that started on May 5, 2016. The second wave of floods started on May 7.

According to the Floodlist, heavy rain in the Dominican Republic resulted in river overflows and urban flooding, including Santo Domingo, the capital city. At least 5 bridges and more than 675 houses have been damaged, 11 of them destroyed. More than 3 400 people were forced out of their homes by May 8.

Flooding in Haiti's Baradère damaged at least 215 houses. In Savanette, Centre Department, close to the border with the Dominican Republic, 4 people reportedly died trying to cross flooding rivers or ravines. A woman was dragged by the rising waters while she was trying to cross a the Artibonite River in Petit-Fond.

For Haiti, this was the third round of severe weather and flooding since late April when two people died after being swept by flood waters.

During the last three weeks, Haiti has seen the equivalent of half its yearly precipitation, even though the cyclonic season (usually from June to November) has not yet started.

NASA/JAXA GPM core observatory satellite saw a line of heavy rainfall on the eastern side of the Dominican Republic when it flew over at 04:28 UTC on May 8. 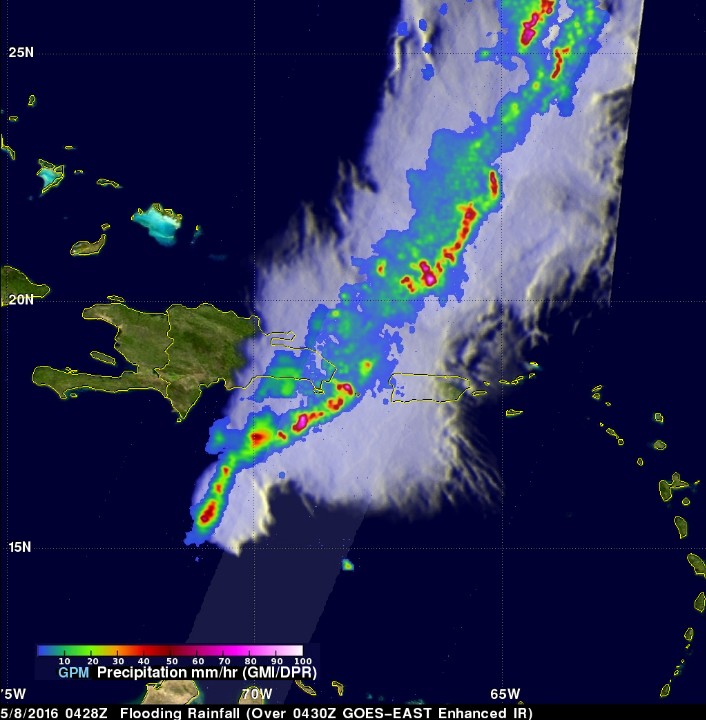 Powerful storms were measured dropping rain at a rate of almost 300 mm (11.8 inches) per hour along this line of storms. GPM's Radar (DPR Ku Band) was used to measure the 3-D structure of precipitation in this area. Some tall thunderstorms north of Puerto Rico were measured by DPR reaching heights of over 16 km (9.9 miles). 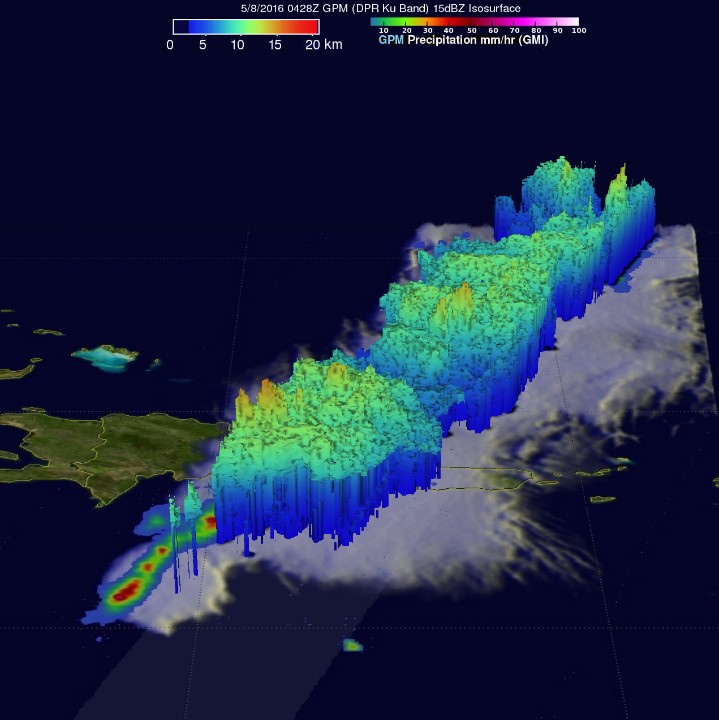 Data from NASA's Integrated Multi-satellitE Retrievals for GPM (IMERG) were used to estimate the amount of rain that fell over this area between May 2 and 9, 2016.

The heaviest rainfall was estimated by IMERG to be over 300 mm (11.8 inches) in large areas of the eastern Dominican Republic.