New studies conducted by the Southern Volcano Observatory (OVS) show the El Misti volcano in Arequipa, Peru, is awake and emitting gases, not asleep as previously thought. Its activity is not a cause for alarm, though, as there are no signs of hazardous eruption at present.

The El Misti volcano is situated only 17 km (10.6 miles) from the Arequipa city, with a population of almost one million inhabitants and an important infrastructure, including dams, hydroelectric plants, airports and mining centres. It is therefore considered to be the greatest volcano threat in the country. 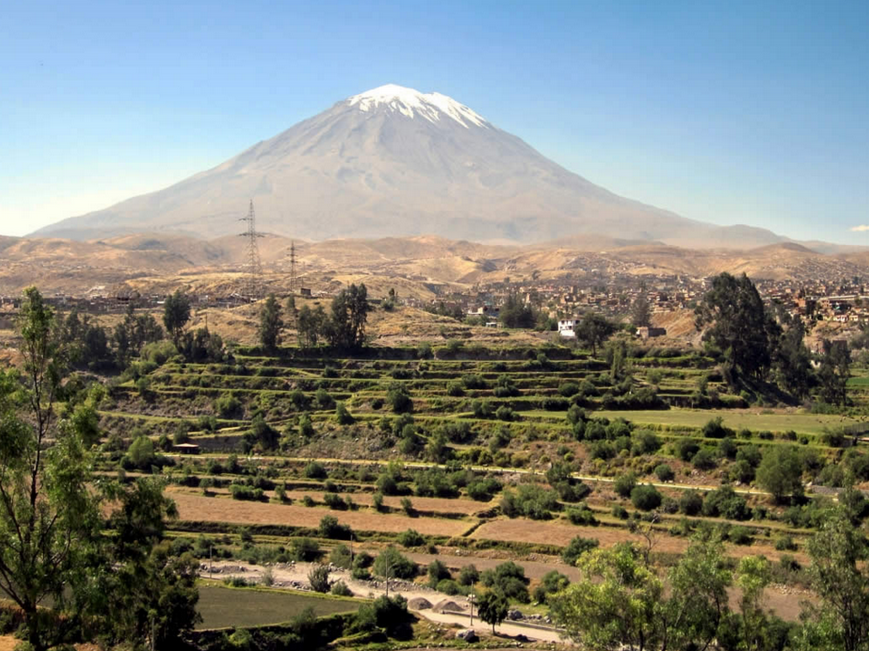 About a month ago, a group of experts from OVS imaged the crater and confirmed the magmatic activity.

"The gases that Misti emits are magmatic. This confirms that the volcano is active and is not sleeping, as many people think. The gases reach 500 m (1 640.4 feet) and contain sulfuric acid, carbon and calcium" said Luisa Macedo, VS engineer.

During January 2016, volcano-tectonic earthquakes (VTs) have shown a decrease when compared to a period between December 1 and 30, 2015, according to the OVS-PGI. Its average daily occurrence rate dropped from 28 to 21 VTs per day. A small seismic swarm was reported on January 22, which produced a maximum of 72 earthquakes VTs. 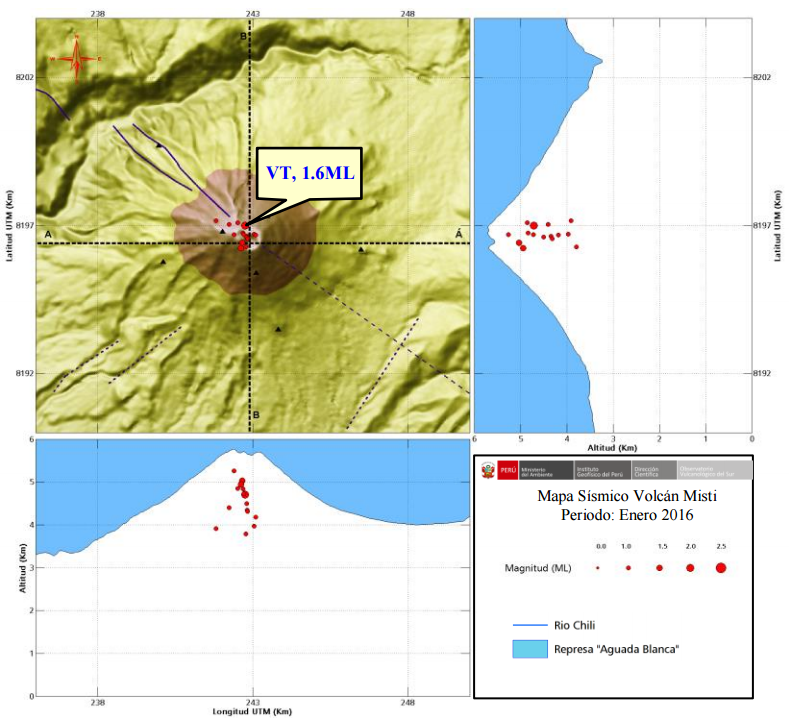 At the same time, the average daily occurrence rate for the long-period seismicity (LP) remained below 6 LPs per day. The highest occurrence of LPs was recorded on January 11, with up to 5 low energy LPs (< 1 MJ). Tremor activity remained unchanged, and only 4 tremors occurred on the busiest day of the monitoring period (day 3). Tremor events were characterised as short (< 5 min) and low energy (<0.5 MJ) occurrences. 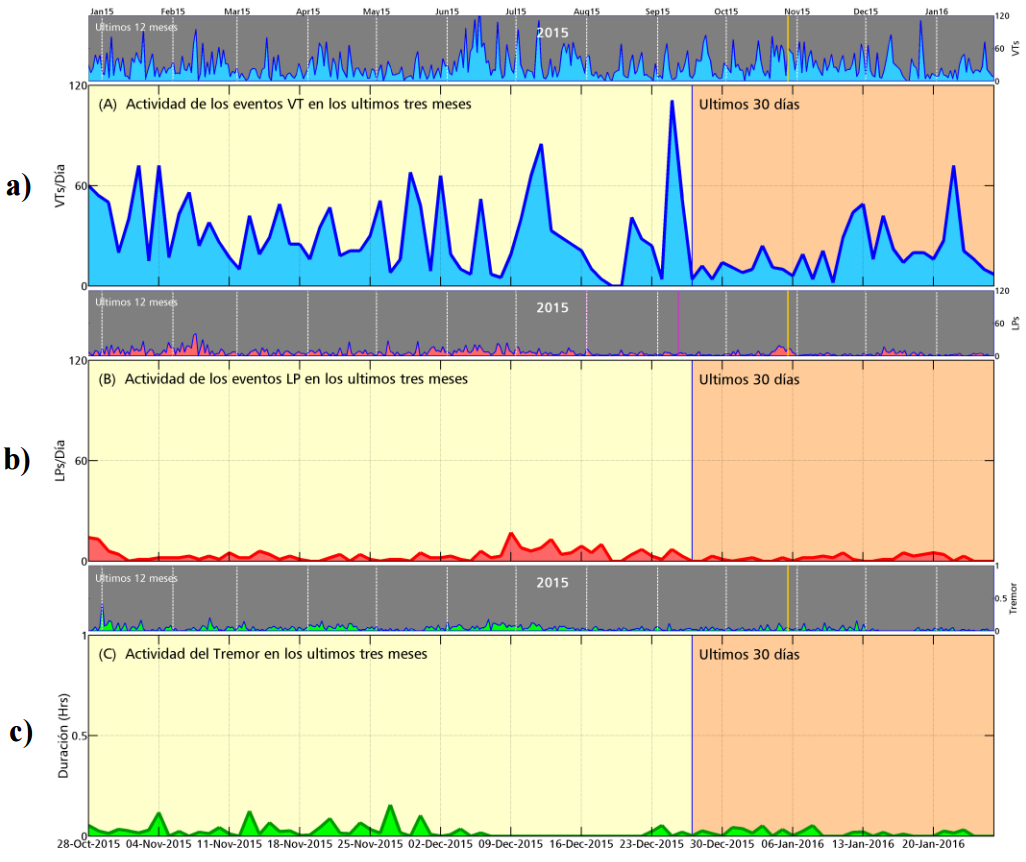 Quarterly and bi-annual evolution for the El Misti volcano seismicity to January 26, 2016. a) VTs, b) and c LPs) Duration of Tremor. Image credit: OVS-PGI

Total seismic energy levels of the El Misti volcano remained low throughout January 2016 and no thermal activities or major magmatic gas abnormalities have been observed.

In 2014, seismicity at the volcano was dominated by VT earthquakes, GVP reports. Two seismic swarms (over 100 events per day) were recorded on May 19 and June 3. A tremor increase was recorded in April, although the total duration did not exceed 10 minutes and was generally low-amplitude. Long-period seismicity was not significant. In the last two weeks before June 24, seismicity increased slightly and tremor was recorded daily.

The nearby inhabited areas are, luckily, far enough from the volcano to not be affected by the emissions. Despite the volcano is now confirmed to be active, this doesn't necessarily involve the danger of a hazardous eruption, according to Domingo Ramos, another expert from OVS.

The El Misti volcano had, at least, one major eruption and about ten fumarolic crisis over the last 600 years.

El Misti, Peru's most well-known volcano, is a symmetrical andesitic stratovolcano with nested summit craters that towers above the city of Arequipa. The modern symmetrical cone, constructed within a small 1.5 x 2 km (4 921.3 x 6 561.7 feet) wide summit caldera that formed between about 13 700 and 11 300 years ago, caps older Pleistocene volcanoes that underwent caldera collapse about 50 000 years ago. A large scoria cone has grown with the 830-m-wide (2 723.1 feet) outer summit crater of El Misti.

At least 20 tephra-fall deposits and numerous pyroclastic-flow deposits have been documented during the past 50 000 years, including a pyroclastic flow that travelled 12 km (7.5 miles) to the south about 2 000 years ago. El Misti's most recent activity has been dominantly pyroclastic, and strong winds have formed a parabolic dune field of volcanic ash extending up to 20 km (12.4 miles) downwind. An eruption in the 15th century affected Inca inhabitants living near the volcano. Some reports of historical eruptions may represent increased fumarolic activity. (GVP)