One more system of tropical strength has developed in the Atlantic, as the 2015 Atlantic hurricane season nears toward the end. Tropical Storm "Kate" developed in the basin on November 9, 2015, only about 60 km (40 miles) from the Bahamas, the National Hurricane Center (NHC) reported. Tropical Storm Warning was issued for portions of the Bahamas, and residents are encouraged to closely follow its further development.

Tropical Depression "Twelve" was spotted on November 9, early morning, and developed into a tropical storm on the same day by 13:20 UTC, according to the data from Air Force Reserve hurricane hunter aircraft. The system was located about 60 km (40 miles) east-southeast of Cat Island in the Bahamas, packing maximum sustained winds of 65 km/h (40 mph) moving northwestward at 24 km/h (15 mph). Maximum central pressure was estimated at 1 008 hPa at the time. 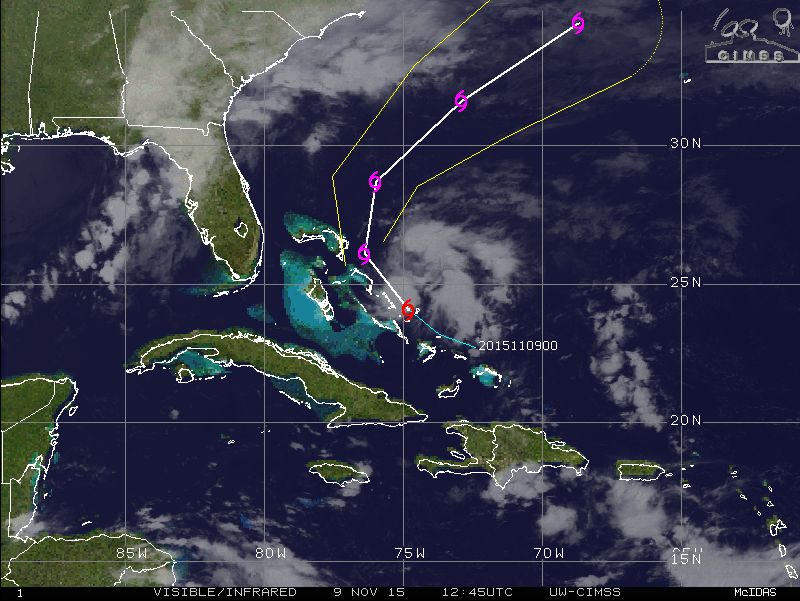 Tropical Storm "Kate" is forecast to slightly intensify over the next 24 hours, and start to dissipate afterwards. By November 12 the system will most likely diminish and get absorbed by an extratropical low, NHC reported.

TD #12 has formed near the Bahamas. It could become Tropical Storm Kate, but It's expected to head away from the US pic.twitter.com/nDwGReojIc

Over the next 48 hours the storm is expected to turn toward the northwest and then north-northwestward. Kate's center will most likely pass near or over parts of the central Bahamas during November 9.

Tropical Storm Warning is currently in effect for the Acklins, Samana Cays, Crooked Island and Long Cay in the southeastern Bahamas, central Bahamas and northwestern Bahamas. The areas can expect winds of tropical force throughout the day, and rainfall accumulation between 25.4 and 76.2 mm (1 and 3 inches) by the late November 9, according to NHC.