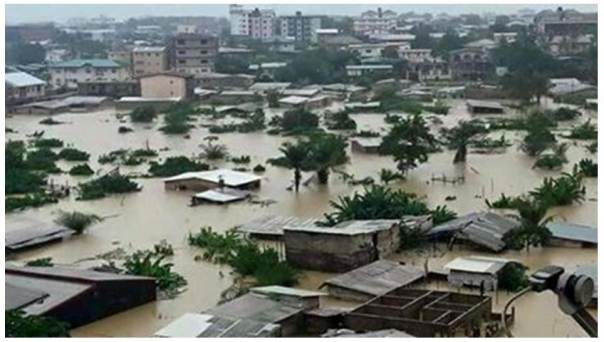 Severe flooding caused by tropical monsoon rains have devastated the Cameroon's economic capital, Douala. At least 4 people were killed, 2 000 displaced, and over 30 000 citizens were directly affected by July 1, 2015, after more than a week of heavy rainfall.

Much of the city is still without power, the car wrecks and motorcycles lie turned upside down in the muddy streets covered in trash and other debris. Many people have lost everything: crops, livestock, homes and businesses.

#Douala, Cameroon submerged after heavy downpours. Our thoughts are with the victims. #environment #Infrastructure pic.twitter.com/whFFuZVnWi

Tropical monsoon flooding season becomes deadlier each year, causing more and more damage in southwestern Cameroon and in other countries within the shores on the Gulf of Guinea.

The average annual precipitation value has declined to 3080 mm (121.2 inches), again, in 2014. The Centre for Research on the Epidemiology of Disaster's Emergency Events Database (EM-DAT) reports 4 200 people affected by the flooding, between 1998 and 2006.

Flooding is not unusual the this region, especially in the monsoon rain season, however the scale of the devastation caused by the latest flooding is unprecedented, said Fritz Ntone, the government delegate to the Douala city council. 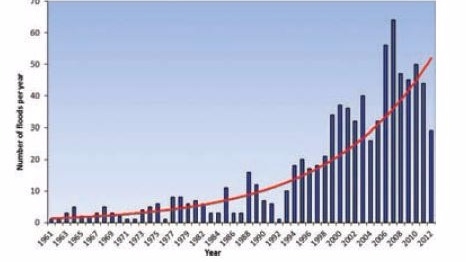 The number of floods per year across Africa between 1961 and 2013. Image copyright: CLUVA

"This is one of the worst floods we have had in Douala, a clear sign that climate change is on our doorsteps," said Samuel Nguiffo, executive director of the Center for Environment and Development (CED).