Taming the brutal environment of Mars for future human explorers to survive and thrive there may demand a touch of “ecopoiesis” – the creation of an ecosystem able to support life.

The NASA Innovative Advanced Concepts (NIAC) Program is funding cutting-edge work by Eugene Boland, chief scientist at Techshot Inc. of Greenville, Indiana. The scientist has been busy working in the firm’s “Mars room,” which houses a test chamber capable of simulating the Red Planet’s atmospheric pressure, day-night temperature changes and the solar radiation that cascades upon the planet’s surface. 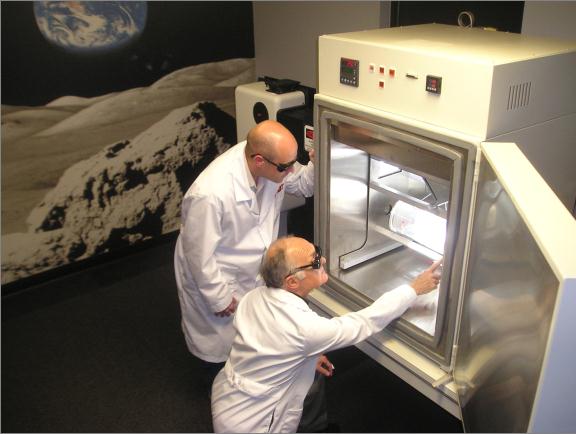 An experiment for planting on Mars designed to evaluate oxygen-producing techniques that could support future human habitats on the Red Planet.

Inside the Mars room, Boland and his team are testing the viability of using ecosystem-building pioneer organisms to churn out oxygen by using Martian regolith. Some organisms within the test bed experiment planted on the Red Planet also could remove nitrogen from the Martian soil.

“This is a possible way to support a human mission to Mars, producing oxygen without having to send heavy gas canisters,” Boland saaid. “Let’s send microbes and let them do the heavy-lifting for us.”

Boland and his colleagues envision their test bed gear carried aboard a future Mars rover. At carefully selected sites, the small container-like devices would be augured into the ground, planted just a few inches in depth. Then the selected Earth organisms — extremophiles like certain cyanobacteria – would interact with the Mars soil that has been captured within the container.

Yet another possible ingredient extracted from the Martian soil is in the form of subterranean ice.

Boland says that NASA’s Curiosity rover now wheeling about on Mars has shown the pressure and temperature on the planet “flirts at the idea” that liquid water may be possible on that distant world.

In a form of “huff and puff” science, the sensor-laden container would detect the presence or absence of a metabolic product – like oxygen – reporting the find back to Earth via a Mars-orbiting relay satellite.

To help sustain expeditionary crews on Mars, experiments are underway to utilize the Martian soil plus subterranean ice, as well as the planet’s atmosphere, to make breathable oxygen.

Boland adds that great care would be taken to craft the container to seal tightly, thereby preventing the Earthly organisms from being exposed to the Martian atmosphere.

The NIAC-funded work is dedicated to opening the door to a biological solution to shipping cylinders of breathable air to Mars at great expense, Boland says. It is another alternative to a known problem of oxygen consumption for the human explorers NASA plans to send to Mars, he adds.

“I’m a biologist and an engineer. So I want to put those two things together to make a useful tool,” Boland concludes.