NASA has selected 15 proposals for study under Phase I of the NASA Innovative Advanced Concepts (NIAC), a program that aims to turn science fiction into science fact through the development of pioneering technologies.

The chosen proposals cover a wide range of inventive concepts, selected for their potential to transform future aerospace missions.  Such transformational technology holds promise of accelerating NASA’s progress toward its goals of exploration beyond low-Earth orbit, and missions to an asteroid and Mars, the agency said today.

"The latest NIAC selections include a number of exciting concepts," said Steve Jurczyk, associate administrator for the Space Technology Mission Directorate (STMD) at NASA Headquarters in Washington. "We are working with American innovators to reimagine the future of aerospace and focus our investments on concepts to address challenges of current interests both in space and here on Earth."

NIAC Phase I awards are valued at approximately $100,000, providing awardees the funding needed to conduct a nine-month initial definition and analysis study of their concepts. If the basic feasibility studies are successful, awardees can apply for Phase II awards, valued up to $500,000 for two additional years of concept development.

"Most of the 2015 NIAC Phase I final candidates were outstanding, and choosing only 15 of them proved to be a challenge," said Jason Derleth, NIAC program executive. "We look forward to seeing how each new study will push boundaries and explore new approaches – that's what makes NIAC unique."

One of the selected proposals calls for the use of a soft-robotic rover for missions that can’t be accomplished with conventional power systems. This rover would resemble an eel with a short antenna on its back that harvests power from locally changing magnetic fields. The goal is to enable amphibious exploration of gas-giant moons like Europa. 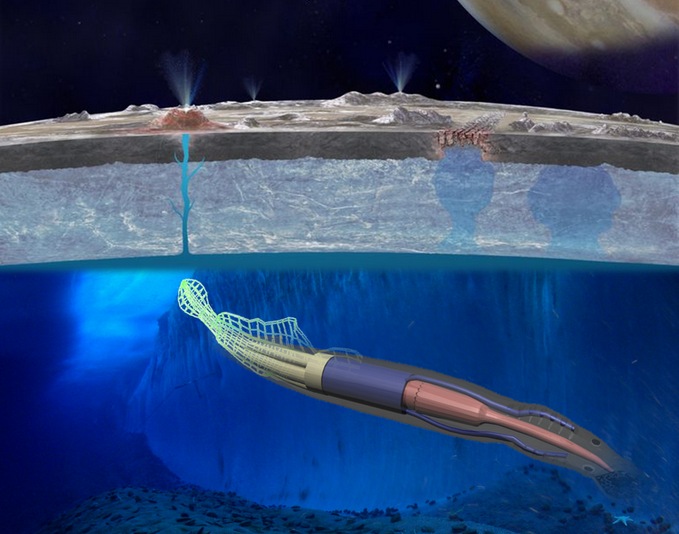 This artist's rendering depicts 2015 NIAC Phase I Fellow Mason Peck's soft-robotic rover for planetary environments for missions that cannot be accomplished with conventional power systems. It resembles a squid, with tentacle-like structures that serve as electrodynamic 'power scavengers' to harvest power from locally changing magnetic fields. The goal is to enable amphibious exploration of gas-giant moons like Europa. Credits: NASA/Cornell University/NSF

Another proposal will look at using two glider-like unmanned aerial vehicles connected by an ultra-strong cable at different altitudes that sail without propulsion. The vehicle would use wind shear in the lower stratosphere (approximately 60,000 ft.), similar to a kite surfer, where the upper aircraft provides lift and aerodynamic thrust, and the lower aircraft provides an upwind force to keep it from drifting downwind. If successful, this atmospheric satellite could remain in the stratosphere for years, enabling NASA's Earth science missions, monitoring capabilities or aircraft navigation at a fraction of the cost of orbital satellite networks.

Employing a novel mobility concept, the Cryogenic Reservoir Inventory by Cost-Effective Kinetically Enhanced Technology (CRICKET) proposal explores volatiles, such as hydrogen, nitrogen and water, stored in permanently shadowed regions on planetary bodies. Inexpensive robotic crawlers, hoppers and soccer-ball style buckey-bots would explore the surface of these dark regions for water and other compounds. Multiple bots could be used to develop a high-resolution map to aid in potentially using these resources.

NASA solicits visionary, long-term concepts for technological development based on their potential value to future and current space missions. The projects are chosen through a peer-review process that evaluates their potential, technical approach and benefits that can be realized in a reasonable timeframe. All concepts are very early in the development cycle and represent multiple technology areas, including aircraft propulsion, human life support, science instruments, unique robotic concepts and exploring other diverse technology paths needed to meet NASA's strategic goals.

NASA's early investments and partnerships with forward-thinking scientists, engineers and citizen inventors from across the nation will provide technological dividends and help maintain America's leadership in the global technology economy.

NIAC is part of NASA's Space Technology Mission Directorate, which innovates, develops, tests and flies hardware for use in NASA's future missions. During the next 18 months, the directorate will make significant new investments to address several high-priority challenges in achieving safe and affordable deep space exploration.