Japan Aerospace Exploration Agency's (JAXA) Hayabusa2 spacecraft is set to return to Earth on December 6, 2020, after a yearlong journey to collect soil samples of asteroid Ryugu. These valuable samples could provide scientists with more clues to the origins of the solar system.

Hayabusa2 arrived at Ryugu in June 2018 and left it in November 2019, carrying with it a capsule of samples from the asteroid's surface. The materials are unaffected by space radiation and other environmental factors, making them rare and hard-won.

"Organic materials are origins of life on Earth, but we still don't know where they came from," said Hayabusa2 project mission manager, Makoto Yoshikawa.

"We are hoping to find clues to the origin of life on Earth by analyzing details of the organic materials brought back by Hayabusa2."

JAXA plans to drop the capsule onto a remote area in Australia from about 220 000 km (137 000 miles) away in space, which is a big challenge that requires precision control.

The capsule, enclosed in a heat shield, will turn to a fireball upon re-entry in the atmosphere at 200 km (125 miles) above the ground.

At around 10 km (6 miles) above the ground, a parachute will activate to prepare the capsule for landing, and beacon signals will be transmitted to show its location. 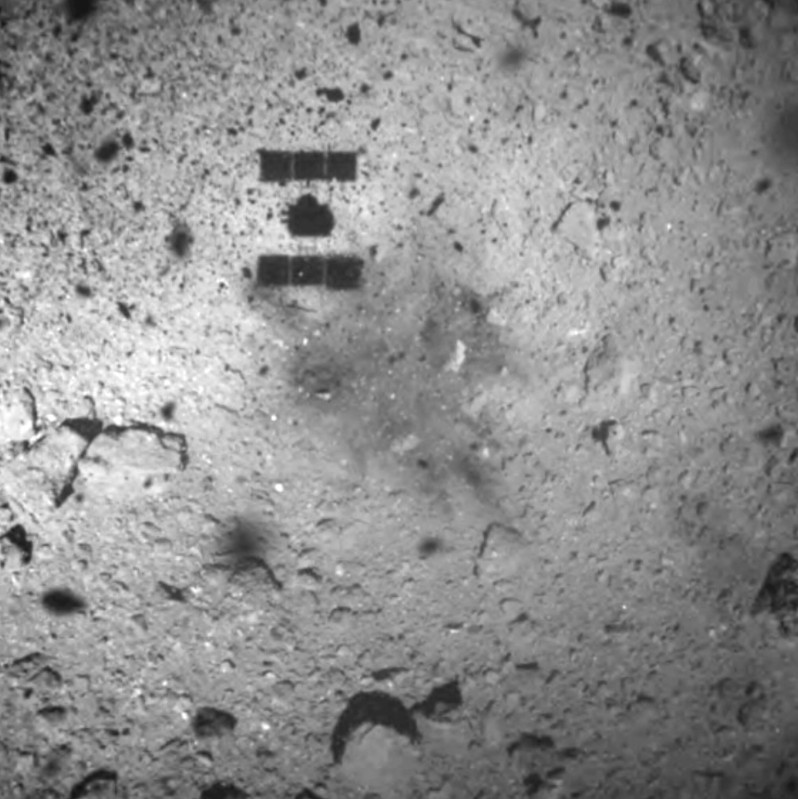 Shadow of the Hayabusa2 spacecraft after its successful touchdown on the asteroid Ryugu. Credit: JAXA

Satellite dishes have been set up at several locations in the target area to catch the signals, while marine radar, drones, and helicopters have also been prepared to help in the retrieval mission.

We’ve released a summary of information on observing the sample capsule during re-entry to Woomera, Australia. There is also an app for iOS that displays the trajectory in AR. If you are in a location where you can see the re-entry, do check this guide.https://t.co/iX1CsvSrtd

After dropping the capsule, Hayabusa2 will return to space and head to another small asteroid called 1998KY26– a journey expected to take 10 years.

JAXA hopes to find clues on how the materials from the samples are distributed throughout the solar system and how they are related to life on Earth.

We have a new video about the Hayabusa2 Extended Mission that is planned for after Hayabusa2 delivers the sample capsule from asteroid Ryugu to the Earth! The video is available in both Japanese and English.https://t.co/otcEfg05JG