Analysis of the impact craters on the asteroid Ryugu using Hayabusa 2's remote sensing image data has revealed the geological history of the near-Earth object.  The research team, led by assistant professor Naoyuki Hirata of the Department of Planetology at Kobe University's Graduate School of Science, are hoping that the gathered data can be used as a basis for future asteroid study.

Through studying location patterns and crater characteristics, the researchers were able to determine that the asteroid's eastern and western hemispheres were formed at different points of time.

The Optical Navigation Cameras (ONC), one of the many different types of cameras on the Hayabusa 2 spacecraft, took around 5 000 images of Ryugu, which have revealed many features of the surface, including 77 impact craters. Researchers used data obtained from the ONC-T between July 2018 to February 2019.

The depressions discerned on Ryugu were classified into four categories, depending on how evident their circular appearance was.

Depressions from category I to III were distinct craters, while Category IV only had quasi-circular features, making it hard to identify whether they were craters or not.

As a result, the researchers were able to discern all impact craters more than 10 to 20 m (33 to 66 feet) in diameter on the asteroid's entire surface. A pattern was also figured out in their distribution. 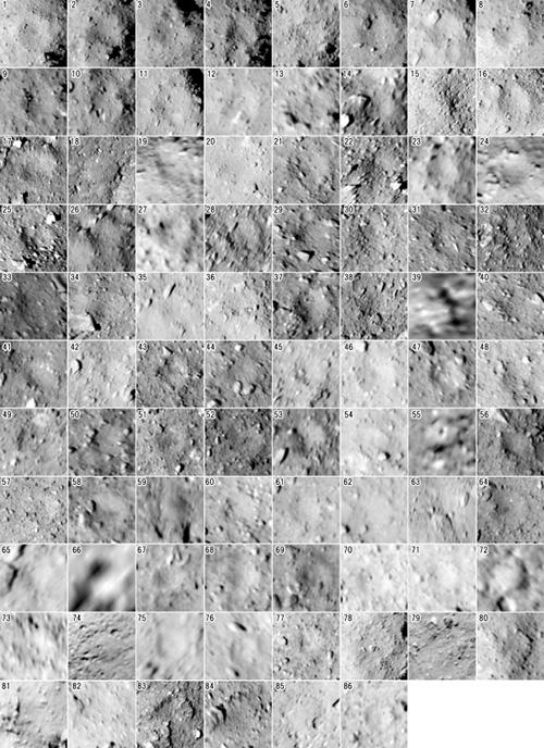 The section of the eastern hemisphere near the meridian has the most craters– this is the area near Cendrillon, Ryugu's biggest crater.

The findings suggest that there have been at least two instances where the asteroid's rotational speed increased, as the eastern hemisphere and western hemisphere were formed at different periods.

Hayabusa 2 is set to drop the capsule containing samples of Ryugu's surface into Earth's atmosphere in late 2020. Analysis of these samples should give more insight into the asteroid.

Asteroid 162173 Ryugu has numerous craters. The initial measurement of impact craters on Ryugu, by Sugita et al. (2019), is based on Hayabusa2 ONC images obtained during the first month after the arrival of Hayabusa2 in June 2018. Utilizing new images taken until February 2019, we constructed a global impact crater catalogue of Ryugu, which includes all craters larger than 20 m in diameter on the surface of Ryugu. As a result, we identified 77 craters on the surface of Ryugu. Ryugu shows variation in crater density which cannot be explained by the randomness of cratering; there are more craters at lower latitudes and fewer at higher latitudes, and fewer craters in the western bulge (160°E – 290°E) than in the region around the meridian (300°E – 30°E). This variation implies a complicated geologic history for Ryugu. It seems that the variation in crater density indicates that the equatorial ridge located in the western hemisphere is relatively young, while that located in the eastern hemisphere is a fossil structure formed during the short rotational period in the distant past.