Severe weather that started a week ago in Sri Lanka has claimed lives of at least 21 people by Saturday, December 27, 2014 and displaced more than 800 000 people.

Officials from the Disaster Management Center said flood has affected the nation's north central and eastern provinces, while landslides were reported in the central part of the country. 980 095 people from over 270 000 families are affected in 17 districts of the country, they said.

The Department of Meteorology issued another severe weather warning on Sunday, December 28. The low pressure area still persists to the east of Pottuvil and is expected to move northwards affecting the weather of the country and surrounding sea area.

Under the influence of the system, showers or thunder showers will occur over most parts of the country particularly in the Eastern, Northern, North central, North western, Central and Uva provinces.

Heavy rainfall, with more than 100 mm, is also likely at some places.

Significant rainfalls were reported from main meteorological stations during last 24 hours ending at 08.30 local time today: 86.2 mm at Batticaloa, 72.9 mm at Vavniya and 69.5 mm at Anuradapura.

Sri Lanka Railways said all train services from capital Colombo to the central hill areas of Kandy, Badulla and Matale were canceled due to the severe weather conditions. 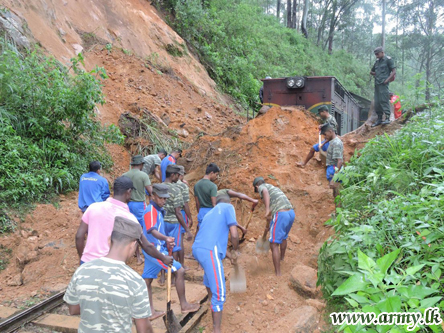 At least 10 people were killed in mudslides in country's central hills where 38 people lost their lives late October when mudslides buried homes of tea plantation workers.

Featured image: A9 road under water near Rambewa. Image credit: mhdajd via Twitter