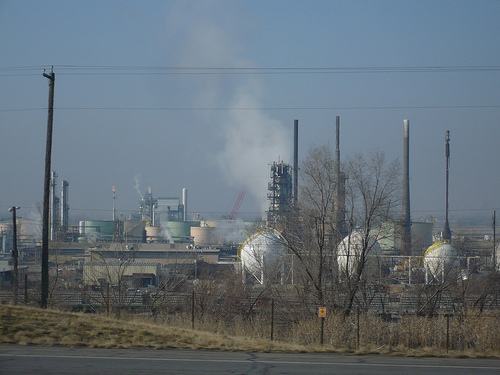 A quiet neighborhood nestled near the Los Angeles River known as Boyle Heights is slowly being invaded, ever so slightly, by hazardous lead levels. The residents, standing on the curb of their beautiful tree-lined streets, didn't see the invasion oncoming, but it's settling among them, into their soil, silently warping their health.

When resident Zoila Meeks was approached in February, state officials asked if they could dig up her yard and test the soil. The test results of the soil were alarming. There, sprawled inside the dirt, tainted and intermixed, were heavy amounts of lead. When word broke out, dozen of the neighborhood residents were rife with fear. Was this the reason why they were sick? Where was the lead coming from?

Exide battery smelting plant at the heart of the problem

They soon found out that a nearby Exide battery smelting center was responsible. Lead smelting nearby had unleashed toxic amounts of lead into the grounds of the Boyle Heights neighborhood. The Exide plant smelts up to 25,000 batteries a day and has been doing so since 1922.

Officials from the state Department of Toxic Substances Control recently announced the high levels of lead and published the findings in the area's newspaper. All across the neighborhood, levels were measured well beyond 80 parts per million.

As state officials brought forth the details in the newspaper, residents of the neighborhood grew concerned over the safety of their homes and especially their children's health.

Zoila Meeks, who has a seven-year-old daughter and is concerned that neighborhood children are at risk, muttered, "It's very scary."

Meanwhile, parents in the neighborhood said they were keeping their children inside, afraid that they may come in contact with brain-damaging lead. The state department even found elevated lead levels at a nearby preschool.

"I'm worried about going to the park with my children," said Sylvia Calderon, a pregnant mother with three young children who lives in Boyle.

Since the findings, officials have instructed parents in the community to keep their children away from bare soil and take other precautionary measures like washing hands. The short-term risks of lead toxicity are being downplayed, however, as officials tell the community that the lead levels "don't necessarily pose an acute risk." This comes from those who don't want to panic parents, but the truth is that levels beyond 80 parts per million are devastating to the nervous system of the more vulnerable in the womb or young children.

One reading showed lead in soil at over 1,000 parts per million

In the state-led investigation, 19 homes were tested in the Boyle Height's neighborhood; all soil samples showed lead levels exceeding 80 parts per million. Vegetable gardens can take up these high levels of lead and pass them into the plant and into the human body, where the neurotoxin can pass through the gastrointestinal tract and enter the blood.

These lead levels exceed California limits, which call for health-related evaluations when exposure goes beyond 80 parts per million. One home even showed lead at 580 parts per million! Another reading reported more than 1,000 parts per million, which is soil that should be classified as hazardous waste. This prompted state officials to test another 20 homes in the City of Maywood two miles south. The high lead levels were persistent in Boyle Heights, although individual home readings are being kept private at the moment.

The state of California promptly contacted Exide, telling the company that they "'failed to adequately rationalize why the initial sampling effort is not representative' and ordered them to immediately reassess that property," the LA Times reported.

A community meeting is scheduled for residents to find out what is to become of their lead-tainted neighborhood. Exide agrees to work with the state to carry out additional testing.

"The health and safety of the community, as well as its workforce, are important to Exide and the company is committed to investing in the Vernon facility to further reduce emissions and protect public health," Exide officials announced.

Arsenic may also be a threat

Lead isn't the only heavy metal being unleashed. In 2013, the same Exide plant was studied by the South Coast Air Quality Management District. They found out that arsenic emissions coming from the plant increased nearby residents' cancer risk, affecting up to 110,000 people.

Los Angeles County has even become involved, recently appointing a "strike team" to go after and investigate facilities that pose environmental threats.

With many years of smelting and releasing toxic emissions, the damage may be irreversible, as the closest neighborhoods test positive for hazardous amounts of lead and possibly arsenic.

Sources for this article include:
http://www.latimes.com

Republished with permission from Natural News
Written by L.J. Devon