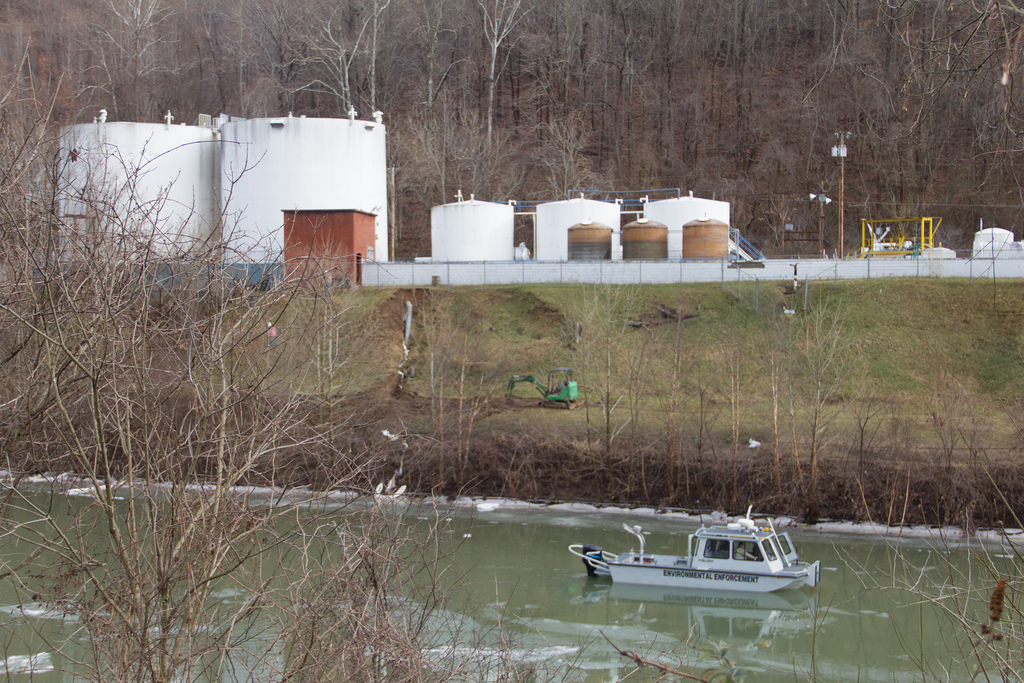 More than 300,000 West Virginia residents in nine different counties as of Saturday are on day three of a do-not-use water order. The order was issued after the chemical 4-methylcyclohexane methanol, a foaming agent used in the coal cleaning process, leaked through a one-inch hole in a water storage tank at the Freedom Industries plant, subsequently contaminating the state's water supply late last week.

The water supplied by West Virginia American Water Co. was declared dangerous after the licorice-smelling chemical overflowed a containment area, releasing approximately 5,000 gallons onto the land. The spillage seeped into the soil and then quickly made its way into the Elk River. The leak occurred half a mile up the river from the water supplier.

W. Va. Gov. Earl Ray Tomblin declared a state of emergency Thursday for the following counties: Kanawha, Putnam, Boone, Jackson, Lincoln, Roane, Clay and Logan. Residents were told that the water could only be used for flushing toilets and fighting fires. "Please don't drink, don't wash with, don't do anything with the water," asked the governor.

According to the American Association of Poison Control Centers, exposure to the chemical is known to cause nausea, vomiting, dizziness, headaches, diarrhea, rashes and irritated skin. The long-term effects of human exposure are unknown, and even more disturbingly, the center fails to provide detailed treatment for exposure other than washing and flushing affected areas.

Dr. Rahul Gupta, the chief health officer for the Kanawha-Charleston Health Department, said the phones have been flooded with calls regarding complaints of irritation of the skin, throat, chest and stomach. "Our emergency rooms have been very busy with individuals unnecessarily concerned and presenting no symptoms," said the Charleston Area Medical Center. So far, four people have been hospitalized; their conditions are currently unknown.

Tomblin expects the state of emergency to remain in effect until the Department of Health and Human Resources and the Department of Environmental Protection confirms that the water is safe for public consumption. Supplies are expected to be deemed safe again once water quality tests find less than 1 ppm of 4-methylcyclohexane methanol in treated water.

The Department of Homeland Security is working closely with the Federal Emergency Management Agency and has since stepped in and provided 16 tractor-trailer loads of bottled water and dispersed them to affected areas.

The local water company is under immense criticism after they initially and incorrectly assured the public that the chemical spill posed no harm to humans. They have since retracted their statement and have been working around-the-clock to flush their system of the toxic chemical, a process which authorities believe could take days.

West Virginia American Water President Jeff McIntyre said, "This is not a chemical that we deal with every day. It's not the type of thing we would see in dealing with a water treatment plant."

"We took some time to understand even what we were dealing with at the time," said McIntyre.

The U.S. Chemical Safety Board has dispatched an investigative team that's scheduled to arrive Monday morning to continue their investigation into the leakage. "This incident continues to impact the people of West Virginia – our goal is to find out what happened to allow a leak of such magnitude to occur and to ensure that the proper safeguards are in place to prevent a similar incident from occurring," said Chemical Safety Board chairman Rafael Moure-Eraso.

According to the EPA, Freedom Industries has since been issued a citation for air pollution following complaints of the odor caused by the chemical.

Republished with permission from Natural News
Written by Julie Wilson

Featured image: An environmental enforcement boat patrols in front of the chemical spill at Freedom Industries by http://www.flickr.com/photos/36622022@N02/11875865563