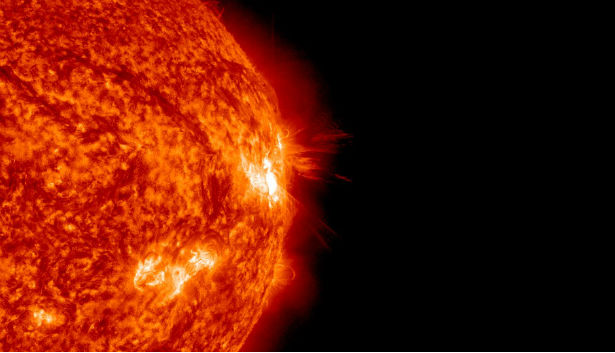 From the start of October, Sun erupted 28 M-class and 3 X-class solar flares, sending the material into the space.

Solar activity is still raising with major X1.0 flare on October 28, 2013 and four moderate M-class flares. While our geomagnetic field is expecting impact of CMEs from two X-class and several M-class flares, last X1.0 and following M5.1 eruptions launched another set of plasma clouds into the space, partially in direction of our planet as well.

Strong X1.0 solar flare erupted around 02:03 UTC from Sunspot 1875 located at the western limb. This event produced a bright coronal mass ejection (CME), mostly heading west. However, some parts may still be Earth directed. A second CME was generated following an M5.1 flare at 04:41 UTC. Type II and Type IV emissions were register, and 170 sfu Tenflare. The cloud was directed well westward, away from Earth. 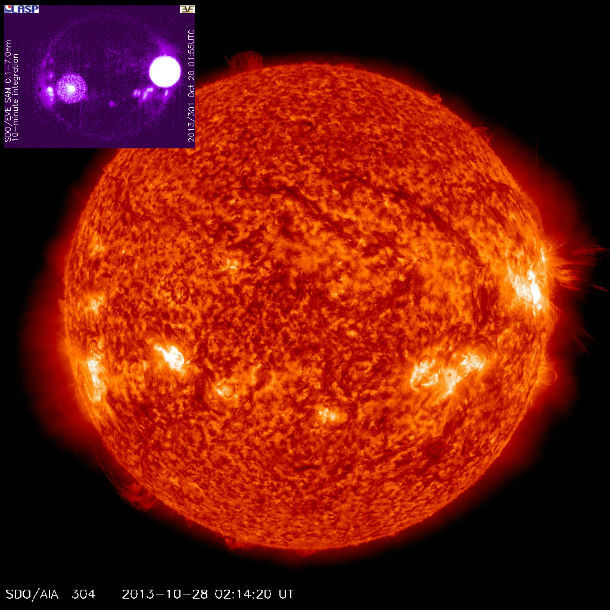 SDO's AIA 304 and EVE shows moments of strong X-class eruption on October 28, 2013 (Courtesy of NASA/SDO and the AIA, EVE, and HMI science teams)

Sunspot 1882 erupted M2.7 and M4.4. A Type II radio emission was detected, Latest LASCO imagery show plasma cloud emerging from the Sun. It is expected to bring G1(Minor) Geomagnetic Storm levels on October 31, 2013. Sunspot 1882 is now located more closer to the center of the visible solar disk so any events from this active region could launch a plasma cloud in our direction. 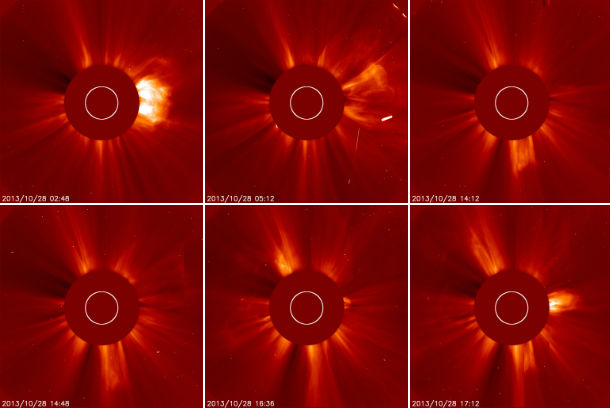 LASCO C2 observed a halo CME at 15:24 UTC on October 28, associated with the M4.4 flare at 15:07 UTC from Sunspot 1882 and with a Type II emission. This CME is Earth directed. Estimation of time of arrival and geomagnetic impact will be carried out once more data are available.

New active region is about to emerge at the northwestern limb. There are no large coronal holes on the Earthside of the sun. 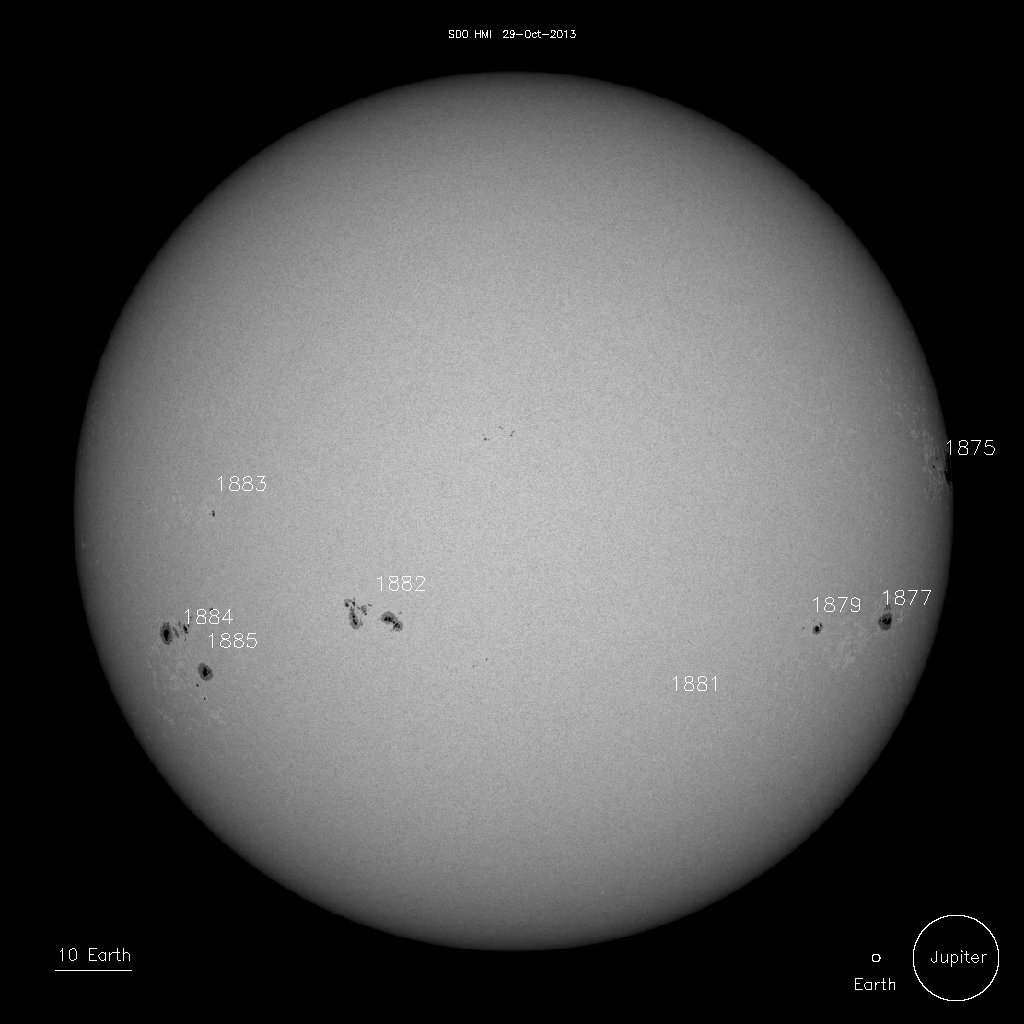 We can expect unsettled to active conditions with isolated minor storm intervals in the next 24 hours. 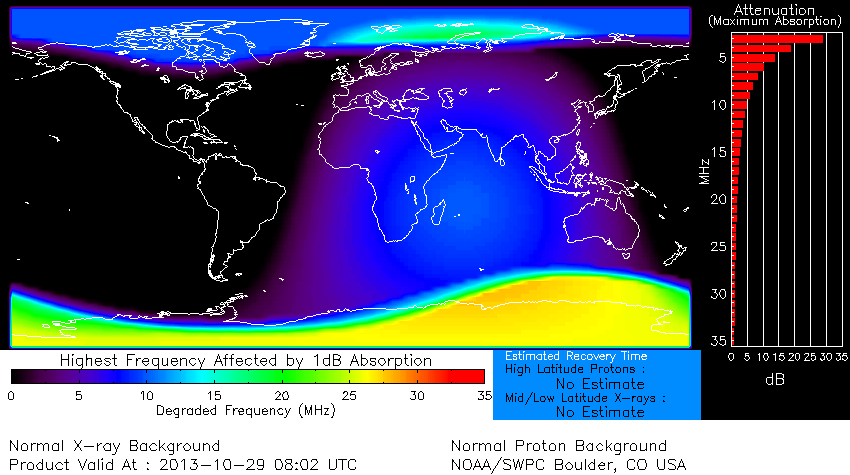 Proton levels are slightly rising now. Our geomagnetic field is at quiet levels for now. Kp index is 1 or bellow. 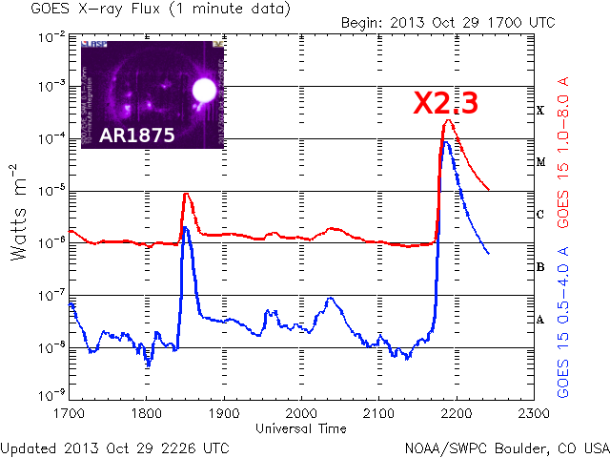