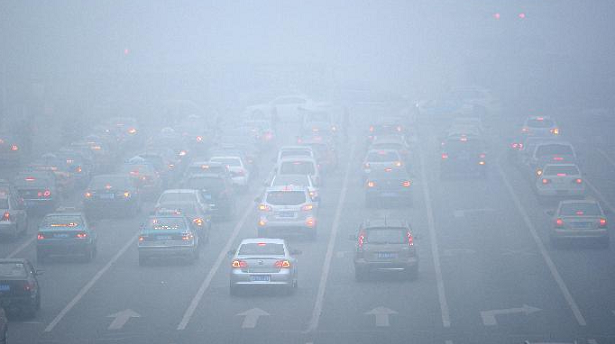 A cold front has sent temperatures plummeting in most northeastern Chinese provinces, causing fog and haze to linger across the region. Agricultural fires in the region in the fall,  following the harvest, also influenced levels of smog. Since the beginning of the week, weather authorities in three of China’s northeastern provinces have issued a red alert for thick smog or fog, advising people to stay indoors if possible. A few days after pollution levels started to rise, Harbin hospitals reported a 30% increase in admissions related to respiratory problems.

Unusually high levels of pollution shrouded the city of Harbin, a northeastern city of more than 10 million people, and the surrounding region. According to state media, the smog in Harbin came after city officials activated public coal-powered heating system before the icy winter. 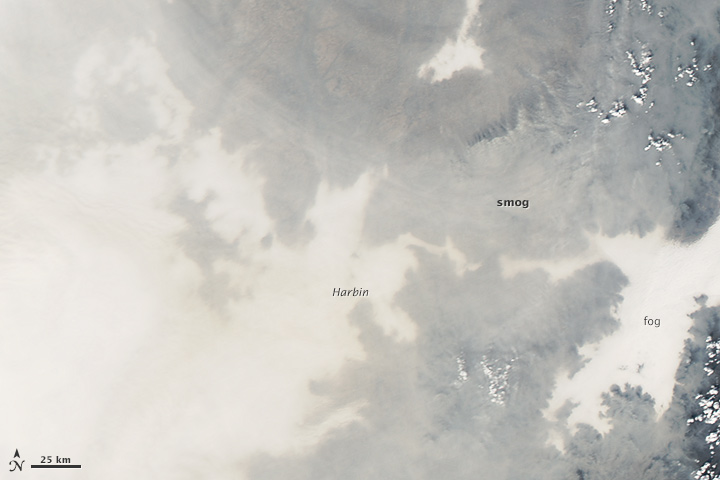 The Moderate Resolution Imaging Spectroradiometer (MODIS) on NASA’s Aqua satellite acquired this natural-color image of northeastern China on October 21, 2013. The brightest areas are fog, which has a tinge of gray or yellow due to the air pollution. Other cloud-free areas have a pall of gray and brown smog that blots out the city and surrounding towns.(NASA image courtesy Jeff Schmaltz, LANCE MODIS Rapid Response. Caption by Adam Voiland)

On October 21, 2013 concentrations of PM2.5, the tiny airborne particles considered most harmful to health, reached 1 000 micrograms per cubic meter – which is far over 35 gram per cubic meter recommended by World Health Organization and EPA. It is extremely rare for particulate levels to reach that high in the absence of a dust storm or forest fire.

Most highways have been closed, and more than 250 flights were canceled at the local airport. Schools and kindergartens were also closed until further notice. Earlier on October 22, the figure exceeded 500, the highest level on the Chinese scale.

According to Liaoning Provincial Meteorological Center, although such severe weather can be quite frequent during the mid-autumn season across the country’s northeast, the dense fog this time has lasted for days because of the sudden cold air and the high humidity level after the rain over the weekend.

According to the Ministry of Environmental Protection, seventy of 74 monitored China's cities have suffered from air pollution in the third quarter of this year. Air pollution readings in Beijing as well as neighboring Tianjin Municipality and Hebei Province have been worse than in other parts of the country.