A surprise flurry of meteors or "shooting stars" caught the eye of several casual observers in Western Europe on the night of 9–10 September. The meteors were apparently quite fast, with some bright enough to qualify as fireballs. They were recorded by the Armagh Observatory’s meteor patrol cameras, which have been operating continuously at the Observatory since 2005. The event was quite unexpected, since no major meteor shower is active in mid-September. Its occurrence provides astronomers with interesting new data about the hidden trails of meteoroids — small bodies ranging in size from fine dust particles to objects of marble-size and larger — in the solar system and their supposed sources: comets and asteroids passing through the inner solar system.

Three cameras operating from the Armagh Observatory and one camera operated by amateur astronomer Robert Cobain in Bangor, Co Antrim, recorded this "outburst" as too did observers in England and Northern Ireland who reported their observations to the Observatory’s fireball database. Between 11pm and 1 am BST approximately 20 meteors were recorded by the Armagh station’s cameras, a very significantly higher rate of detection than the 2–3 meteors expected from normal meteor activity around this time of year.

The phenomenon of a "shooting star" refers to the light given off by pieces of cosmic dust as they enter the Earth's atmosphere at high velocity and burn up at altitudes of 80–100 km. These cosmic dust particles, called "meteoroids", are understood mostly to come from comets. The tiny dust particles are carried away from the ice-and-dust cometary nucleus during the comet’s passage through the inner solar system. As the comet approaches the Sun, the ices on the surface of the nucleus get warmed by solar radiation and leave the comet as dusty streams of gas. Whereas the gas is eventually blown out by the solar wind to produce the straight, highly structured gas or ion tail of the comet, the larger dust particles eventually produce trails of dust in roughly the same region of space as that pursued by the cometary nucleus in its orbit around the Sun. These larger dust grains thus become independent bodies orbiting the Sun, possibly remaining close to the orbit of their parent comet for many thousands of years, forming meteoroid streams. When the Earth passes through such a stream, an increase of meteor activity known as a meteor shower results.

It is thought that this particular event is related to a previously known, but only weakly active, meteor shower called the September Epsilon Perseids or September Perseids (SPE) for short. Not to be confused with the famous August Perseids, the SPE would normally produce less than five meteors per hour in a given year.

The particular comet that created the September Perseids is unknown. Measurements of the orbits of SPE meteoroids from meteor observations suggest that it belongs to the class of long-period comets. These objects spend most of their time much further away than the planets of the solar system and only approach the Sun once every several hundred, or sometimes every several thousand or tens of thousands of years, or more. For that reason, they are usually discovered only a few months or years before they enter the inner solar system. 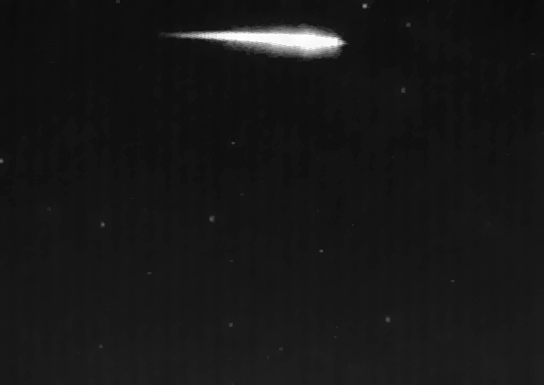 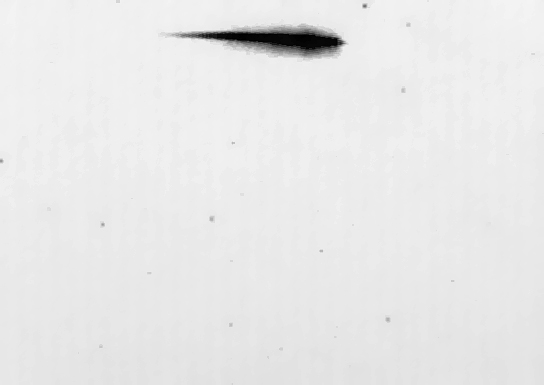 A positive and negative image of one of the bright September Perseid meteors captured by the Armagh Observatory’s South-East pointing meteor patrol camera, at 23:25 BST on the 9th of September. The meteor, which travelled for about 30 degrees across the sky between the Square of Pegasus and Cygnus, is somewhat brighter than the planet Venus. Credit: Armagh Observatory

It is interesting to note that the September Perseids produced a similar outburst in 2008. This might indicate that the parent comet is now approaching the inner solar system. If so, these outbursts provide advance warning of bodies that intersect the orbit of the Earth and can potentially hit it with little or no warning. Observations of this mid-September meteor shower in the coming years, combined with direct telescopic searches for the parent comet, will help determine if this is the case.