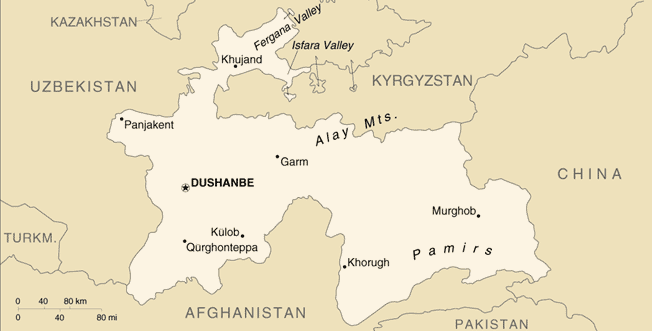 According to media reports anthrax virus is spreading over northern regions of Tajikistan. On July 16, 2013, 2 cases of infections were confirmed in Bobojonghfur district of Tajik Sogdiysk region.

Measures to prevent the the spread of this infectious disease are taken.

So far, one person has reportedly died and 8 more are infected. 61 people have been in contact with disease, all of them are submitted to medical observation.

Like many other members of the genus Bacillus, Bacillus anthracis can form dormant endospores (often referred to as "spores" for short, but not to be confused with fungal spores) that are able to survive in harsh conditions for decades or even centuries. Such spores can be found on all continents, even Antarctica. When spores are inhaled, ingested, or come into contact with a skin lesion on a host, they may become reactivated and multiply rapidly.

Wikipedia explains that anthrax commonly infects wild and domesticated herbivorous mammals that ingest or inhale the spores while grazing. Ingestion is thought to be the most common route by which herbivores contract anthrax. Carnivores living in the same environment may become infected by consuming infected animals. Diseased animals can spread anthrax to humans, either by direct contact (e.g., inoculation of infected blood to broken skin) or by consumption of a diseased animal's flesh.

Anthrax spores can be produced in vitro and used as a biological weapon. Anthrax does not spread directly from one infected animal or person to another; it is spread by spores. These spores can be transported by clothing or shoes. The body of an animal that had active anthrax at the time of death can also be a source of anthrax spores.