Persistent heavy rains brought devastating floods to Germany, Austria, Switzerland, Slovakia, Czech Republic and Hungary at the start  of June 2013. While the water levels dropped in some areas, other locals are still under threat as flood waves sweep down main European rivers. Further downstream along the Elbe, Vltava, and Danube Rivers, residents prepared for the rising water.

In Germany the flood crest moved north as water levels stabilize in the southern areas of the country, following massive flooding that took place over past days. Still many communities remain under water. The historic city center of Dresden survived as the Elbe River surged thought the Saxony capital on June 6, 2013, flooding large areas of the city. In Dresden the Elbe River reached 8.76 meters (28 feet, 9 inches) well above its regular level of 1.98 meters (6.5 feet). On June 6, 2013 the levee broke in the city of Deggendorf with water flooding the neighborhoods, leaving lots of homes underwater. At the same time the authorities warned that a dam was in danger of bursting. 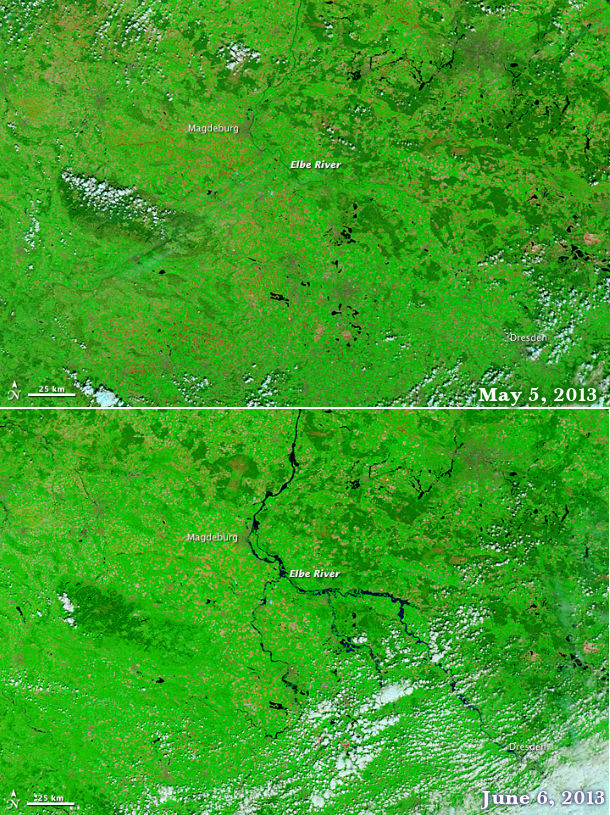 The Moderate Resolution Imaging Spectroradiometer (MODIS) on NASA’s Terra satellite observed flooding in central and eastern Germany on June 6, 2013 (bottom). For comparison, the lower image shows the same area on May 5, 2013. These false-color images use a combination of visible and infrared light to make it easier to distinguish between water and land. River water appears navy blue to black and vegetation is bright green. Clouds are pale blue-green and cast shadows. (NASA image by Jeff Schmaltz, LANCE/EOSDIS Rapid Response. Caption by Michael Carlowicz, with input from Dr. Anke Friedrich, Ludwig-Maximilians-Universität, München.)

AP stated that as of June 7, 2013, at least 17 people died, while many more are missing and thousands have been evacuated because of flooding.

In the Czech Republic around 700 cities, towns and villages have been flooded during the last few days and about 20,000 people were displaced. The Elbe hit highest water levels on the night of June 5, 2013 in the north of the country, but it is reported to have started to recede on June 6, 2013. Also a chemical plant north of Prague was hit by flood waters from the Elbe as a barrier broke. Workers were evacuated and dangerous substances were taken out from the factory.

In Bratislava, Slovakia the Danube River was still rising on June 7, 2013, and although it was forecast to reach an all time high of 10 meters (about 33 feet) the day before, the authorities stated that protective barriers have held firm so far. 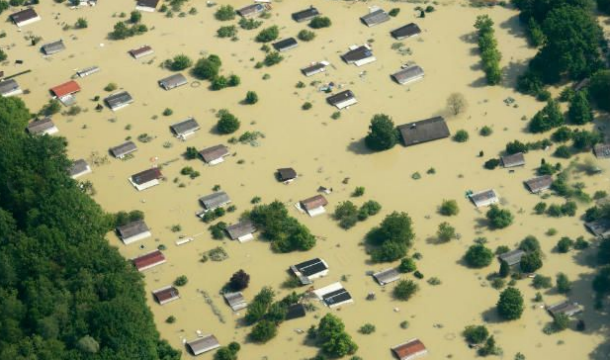 Aerial view of a flooded garden plot near the river Danube in Deggendorf, southern Germany, on June 7, 2013 (Credit: DeccanChronicle)

Sandbag barriers were built throughout June 5, 2013, in the Hungarian capital Budapest, and some roads as well as Margaret Island in the Danube were closed in the wake of the incoming flood wave. While the Danube had already reached record levels in western Hungary early on Friday, Budapest is due to bear the brunt after the weekend, with forecasters predicting the river would rise to more than double its usual levels for this time of year. Hungary has begun evacuating villages and reinforced leaking dikes.
Flood wave was already dubbed "Water Monster" in Croatia which expect the rising waters of Danube River around June 9/10, 2013.
Image gallery
Source: Weather.com, Accuweather, BBC, LANCE/EOSDIS Rapid Response