ESA’s Space Science website released an unique portrait of a solar storm heading straight for Earth, based on data collected by the ESA/NASA SOHO space observatory during a coronal mass ejection. Imagery shows a huge cloud of magnetised plasma ejected from the Sun’s atmosphere and launched towards Earth.

The image shows an extreme-ultraviolet view of the solar disc superimposed on a wide-field view of the surrounding solar environment. The running difference technique takes sequential snapshots and compares them such that the strongest and most persistent features are isolated and highlighted – creating a feeling of rapid change as the solar storm expands outwards on all sides of the Sun and races towards our planet. 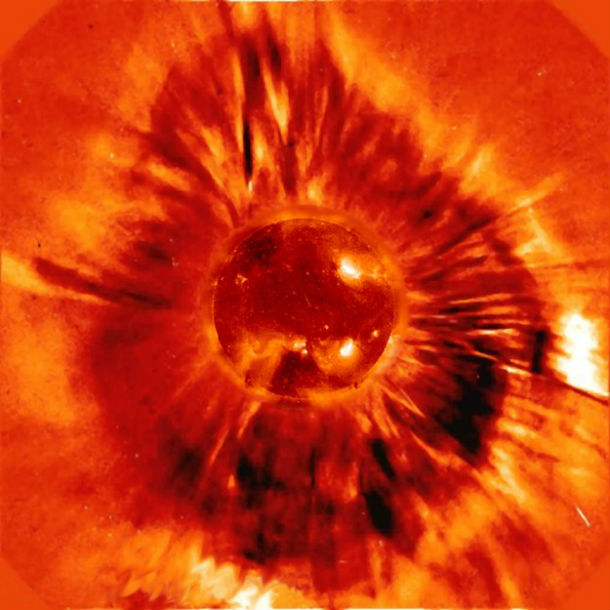 Solar storm heading for Earth. Two particularly bright regions on the Sun’s face indicate active regions with looping magnetic fields. Towards the left a filament of dense, cool gas appears to snake its way across the surface. (Credit: ESA/SOHO The Sun As  Art 2002)

SOHO images are usually shown with a gap of around 3 solar radii from the edge of the Sun’s disc, with an occulter blocking out the intense light from the Sun in order to reveal the faint details of the corona, so the solar disc in image is not to scale with the background image.

Coronal mass ejections can blast away billions of tonnes of matter from the Sun at millions of kilometres per hour. By the time this particular event engulfed Earth two days later, the eruption was some 50 million kilometres wide.

This image featured in a SOHO ‘The Sun as Art’ portfolio in 2002.