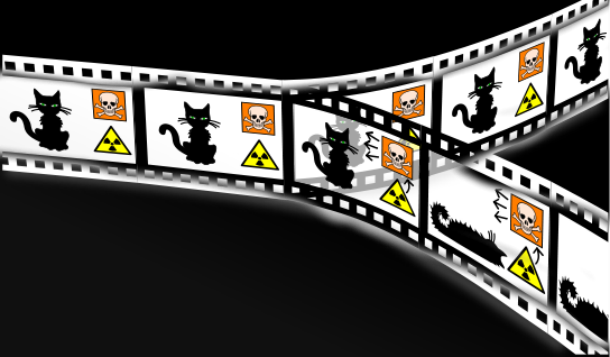 One of the greatest secrets of physics we still do not completely understand, is what happens when the smallest things interact with the big things, that is when quantum mechanics meets our everyday world? You have probably heard of a legendary Schrödinger’s cat.

It is a thought experiment, sometimes called a paradox, that was excogitated by Austrian physicist Erwin Schrödinger in 1935. It illustrates what he saw as the problem of the Copenhagen interpretation of quantum mechanics applied to everyday objects, resulting in a contradiction with common sense.


Here is what Schrödinger devised: a cat, a flask of poison, and a radioactive source are placed in a sealed box. If an internal monitor detects radioactivity (i.e. a single atom decaying), the flask is shattered, releasing the poison that kills the cat. The Copenhagen interpretation of quantum mechanics implies that after a while, the cat is simultaneously alive and dead. Yet, when one looks in the box, one sees the cat either alive or dead, not both alive and dead. This poses the question of when exactly quantum superposition ends and reality collapses into one possibility or the other.

The problem is physics cant explain how the cat or the particle goes from being in a combination of two states at once, to being just one or just the other.Nor do we know how the decision is being made. This poses a problem for every single quantum mechanics experiment.In every case we can predict how likely it is for a particle to be in one state or another, but we still have no clue how it actually ends up that way. That is where “Many worlds theory” of the quantum mechanics comes in. 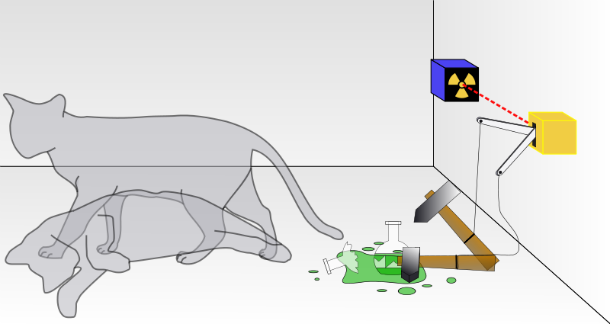 Many worlds proposes an idea that quantum system doesn’t actually decide, rather that at every junction where large everyday stuff interacts with the quantum system the timeline of history splits, and both possibilities happen on different alternate branches.

The quantum-mechanical “Schrödinger’s cat” paradox according to the many-worlds interpretation. In this interpretation, every event is a branch point. The cat is both alive and dead—regardless of whether the box is opened—but the “alive” and “dead” cats are in different branches of the universe that are equally real but cannot interact with each other.

Featured image:  Schrödinger’s Cat, many worlds interpretation, with universe branching. Visualization of the separation of the universe due to two superposed and entangled quantum mechanical states. (Credit: Christian Schirm)