Electronic circuits are based on electrons, but one of the most promising technologies for future quantum circuits are photonic circuits, i.e. circuits based on light (photons) instead of electrons. First, it is necessary to be able to create a stream of single photons and control their direction.

Researchers around the world have made all sorts of attempts to achieve this control, but now scientists at the Niels Bohr Institute have succeeded in creating a steady stream of photons emitted one at a time and in a particular direction. The breakthrough has been published in the scientific journal Physical Review Letters.

Photons and electrons behave very differently at the quantum level. A quantum is the smallest unit in the atomic world and photons are the basic units of light and electrons of electrical current. Electrons are so-called fermions and can easily flow individually, while photons are bosons that prefer to clump together. But because information for quantum communication based on photonics lies in the individual photon, it is necessary to be able to send them one at a time.

"So you need to emit the photons from a fermionic system and we do this by creating an extremely strong interaction between light and matter," explains Peter Lodahl, Professor and head of the research group Quantum Photonics at the Niels Bohr Institute at the University of Copenhagen.

The researchers have developed a kind of single-photon cannon integrated on an optical chip. The optical chip consists of an extremely small photonic crystal that is 10 microns wide (1 micron is a thousandth of a millimeter) and 160 nanometers thick (1 nanometer is a thousandth of micron.) Embedded in the centre of the chip is a light source, a so-called quantum dot. 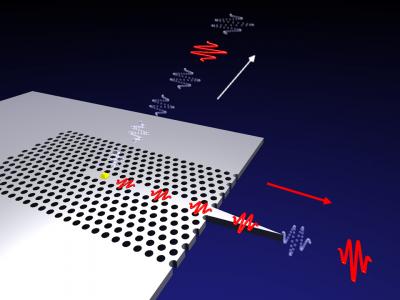 This is an illustration of the single-photon cannon. A quantum dot (illustrated with the yellow symbol) emits one photon (red wave packet) at a time. The quantum dot is embedded in a photonic-crystal structure, which is obtained by etching holes (black circles) in a semiconducting material (light grey). Due to the holes, the photons are not emitted in all directions, but only along the channel where there are no holes. Only 1.6 percent of the emitted photons will be emitted in other directions (illustrated by the upward moving photon) and is thus lost, while 98.4 percent are emitted in the desired direction. Image credit: Marta Arcari, Niels Bohr Institute

"What we then do is shine laser light on the quantum dot, where there are atoms with electrons in orbit around the nucleus. The laser light excites the electrons, which then jump from one orbit to another and thereby emit one photon at a time. Normally, light is scattered in all directions, but we have designed the photonic chip so that all of the photons are sent through only one channel," explains Søren Stobbe, Associate Professor of the Quantum Photonic research group at the Niels Bohr Institute.

Peter Lodahl and Søren Stobbe explain that it not only works, but also that it is extremely effective. "We can control the photons and send them in the direction we want with a 98.4 percent success rate. This is ultimate control over the interaction between matter and light and has amazing potential. Such a single-photon cannon has long been sought after in the research field and opens up fascinating new opportunities for fundamental experiments and new technologies," they explain.

The two researchers are in the process of patenting several parts of their work, with a specific goal of developing a prototype high-efficiency single-photon source, which could be used for encryption or for calculations of complex quantum mechanical problems and in general, is an essential building block for future quantum technologies. It is expected that the future's quantum technology will lead to new ways to code unbreakable information and to carry out complex parallel calculations.