Sunspots 1618 and 1620 have beta-gamma-delta configuration of their photospheric magnetic field and produced two M-class flares in the past 24 hours (M1.6 and M1.0 peaking at 15:57 UTC and 21:26 UTC yesterday). More M-class flares will probably occur in the coming 48 hours in one or both of these active regions. NOAA/SWPC forecasters estimate 35% chance of M-class and 5% chance of X-class solar flares.

Region 1623 also grew significantly in areal coverage but the magnetic complexity is difficult to determine with its proximity to the limb. 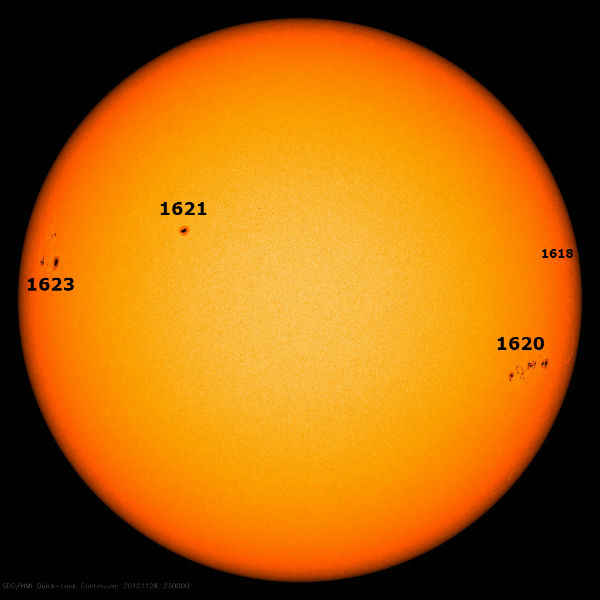 A proton event is possible in case of a strong flare in any of these two sunspot groups due to their position in the western solar hemisphere.
The Earth is currently inside a slow (around 380 km/s) solar wind flow with average (around 4 nT) interplanetary magnetic field magnitude.

The arrival of the interplanetary shock driven by the ICME corresponding to the partial halo CME observed on the Sun yesterday is expected on November 30, 2012. As a result we can expect active to minor storm geomagnetic conditions. Isolated unsettled periods are possible through December 1, 2012 due to coronal hole high-speed stream effects.

Featured image courtesy of NASA/SDO and the AIA, EVE, and HMI science teams.

Incessant monsoon rainfall has triggered floods and multiple landslides in several districts of Bagmati Pradesh and Gandaki Pradesh, Nepal, from Wednesday to Friday, July 8 to 10, 2020. The police confirmed at least 12 fatalities-- including three children, and 19...

More than 10 m (32 feet) of snow accumulated in parts of southern Norway by July, according to the BKK energy company, who is conducting clearing operations to prevent flooding in the mountains. The region is currently so cold that the snow is hardly melting, but...

Tropical Storm "Fay" formed at 21:00 UTC on July 9, 2020, just off the coast of North Carolina, U.S. as the 6th named storm of the 2020 Atlantic hurricane season. The center of Fay is forecast to move near the Mid-Atlantic coast today and move inland over...

The destructive hailstorm that hit Calgary on June 13, 2020, has officially been declared the fourth costliest natural disaster in the history of Canada, with insured damages hitting almost 1.2 billion dollars. Last month, a massive weather system moved through...

A rare meteotsunami formed in the Upper Chesapeake Bay in Virginia on Monday, July 6, 2020. It occurred as intense storms moved through the region, which included hail and strong winds. The National Weather Service (NWS) in Mount Holly confirmed the weather...

An unseasonal low-pressure system brought isolated showers and thunderstorms to Cyprus, mainly in the mountains and inland, on Wednesday, July 8, 2020. Cyprus Department of Meteorology chief Kleanthis Nicolaides said the weather left experts puzzled as such systems...

A new tropical cyclone is organizing off the coast of North Carolina, U.S. on July 9, 2020. Environmental conditions are conducive for development, and a tropical or subtropical cyclone will likely form later today or tonight -- NHC gives it 80% chance of formation...