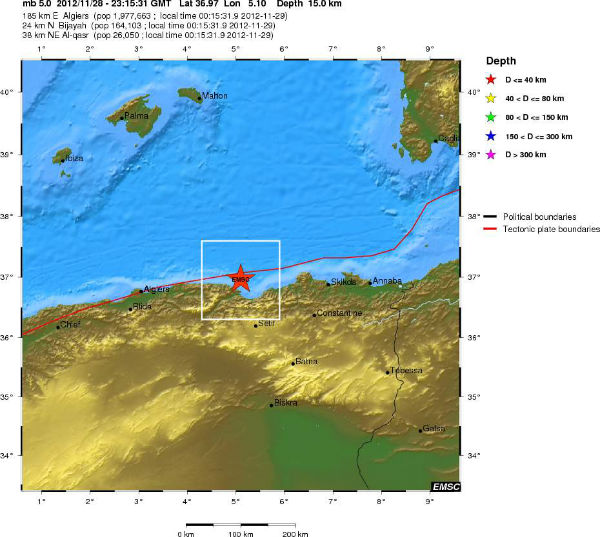 There are no reports of significant damage or injuries at the moment. In October 1980 major M 7.7 earthquake struck El Asnam (formerly Orleansville) leaving 5,000 people dead.

In the Mediterranean region there is a written record, several centuries long, documenting pre-instrumental seismicity (pre-20th century). Earthquakes have historically caused widespread damage across central and southern Greece, Cyprus, Sicily, Crete, the Nile Delta, Northern Libya, the Atlas Mountains of North Africa and the Iberian Peninsula. The 1903 M8.2 Kythera earthquake and the 1926 M7.8 Rhodes earthquakes are the largest instrumentally recorded Mediterranean earthquakes, both of which are associated with subduction zone tectonics. Between 1939 and 1999 a series of devastating M7+ strike-slip earthquakes propagated westward along the North Anatolian Fault Zone, beginning with the 1939 M7.8 Erzincan earthquake on the eastern end of the North Anatolian Fault system. The 1999 M7.6 Izmit earthquake, located on the westward end of the fault, struck one of Turkey’s most densely populated and industrialized urban areas killing, more than 17,000 people. Although seismicity rates are comparatively low along the northern margin of the African continent, large destructive earthquakes have been recorded and reported from Morocco in the western Mediterranean, to the Dead Sea in the eastern Mediterranean. The 1980 M7.3 El Asnam earthquake was one of Africa’s largest and most destructive earthquakes within the 20th century.

Large earthquakes throughout the Mediterranean region have also been known to produce significant and damaging tsunamis. One of the more prominent historical earthquakes within the region is the Lisbon earthquake of November 1, 1755, whose magnitude has been estimated from non-instrumental data to be about 8.0. The 1755 Lisbon earthquake is thought to have occurred within or near the Azores-Gibraltar transform fault, which defines the boundary between the African and Eurasian plates off the west coast of Morocco and Portugal. The earthquake is notable for both a large death toll of approximately 60,000 people and for generating a tsunami that swept up the Portuguese coast inundating coastal villages and Lisbon. An earthquake of approximately M8.0 near Sicily in 1693 generated a large tsunami wave that destroyed numerous towns along Sicily’s east coast. The M7.2 December 28, 1908 Messina earthquake is the deadliest documented European earthquake. The combination of severe ground shaking and a local tsunami caused an estimated 60,000 to 120,000 fatalities.