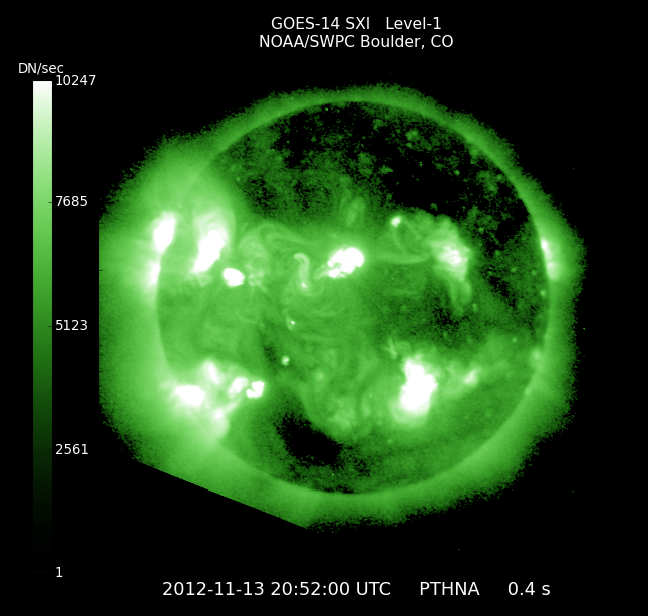 Moderate solar flare measuring M2.8, at it’s peak, erupted from Region 1613 at 20:54 UTC, November 13, 2012. A 10cm Radio Burst was associated with the event, this can be indicative of significant radio noise in association with a solar flare.

NOAA/SWPC issued extended warning for geomagnetic storming levels. K-index of 4 is expected at least until 06:00 UTC, November 14, 2012. Aurora may be visible at high latitudes such as Canada and Alaska. 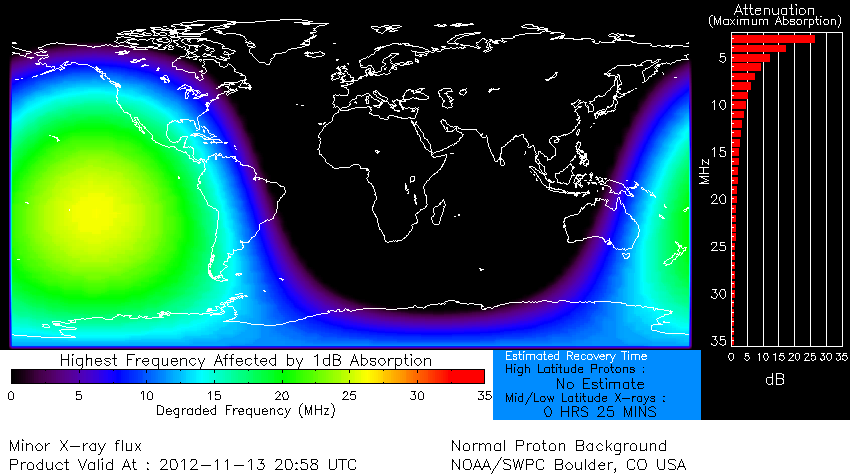 Solar activity has been at high levels for the past 24 hours. Region 1613 (S23E31) has developed a Delta magnetic configuration and produced multiple M-class flares with associated CMEs. The largest solar event of the period was a M6 event observed at 13/0204Z from Region 1613. Regions 1610 (S24W23) and 1611 (N12W00) have Beta Gamma magnetic configurations. There are currently 6 numbered sunspot regions on the disk. No CMEs observed during the period are expected to be geoeffective.

IB. Solar Activity Forecast: Solar activity is expected to be at moderate levels on days one, two, and three (14 Nov, 15 Nov, 16 Nov).

IIA. Geophysical Activity Summary 12/2100Z to 13/2100Z: The geomagnetic field has been at quiet to active levels for the past 24 hours. Solar wind speed, as measured by the ACE spacecraft, reached a peak speed of 504 km/s at 13/0111Z. Total IMF reached 22.8 nT at 13/0053Z. The maximum southward component of Bz reached -19.5 nT at 12/2338Z. ACE data indicated a shock arrival at 12/2216Z. A sudden impulse was observed at 12/2316Z (16 nT, as measured by the Boulder USGS magnetometer). IIB. Geophysical Activity Forecast: The geomagnetic field is expected to begin at active levels early on day 1 (14 Nov) as CME effects subside. Quiet to unsettled levels are expected on days 1 and 2 (14, 15 Nov) due to effects from a negative polarity coronal hole high speed stream. On day 3 (16 Nov), conditions are expected to return to mostly quiet levels. Protons have a slight chance of reaching alert threshold on days one, two, and three (14 Nov, 15 Nov, 16 Nov).