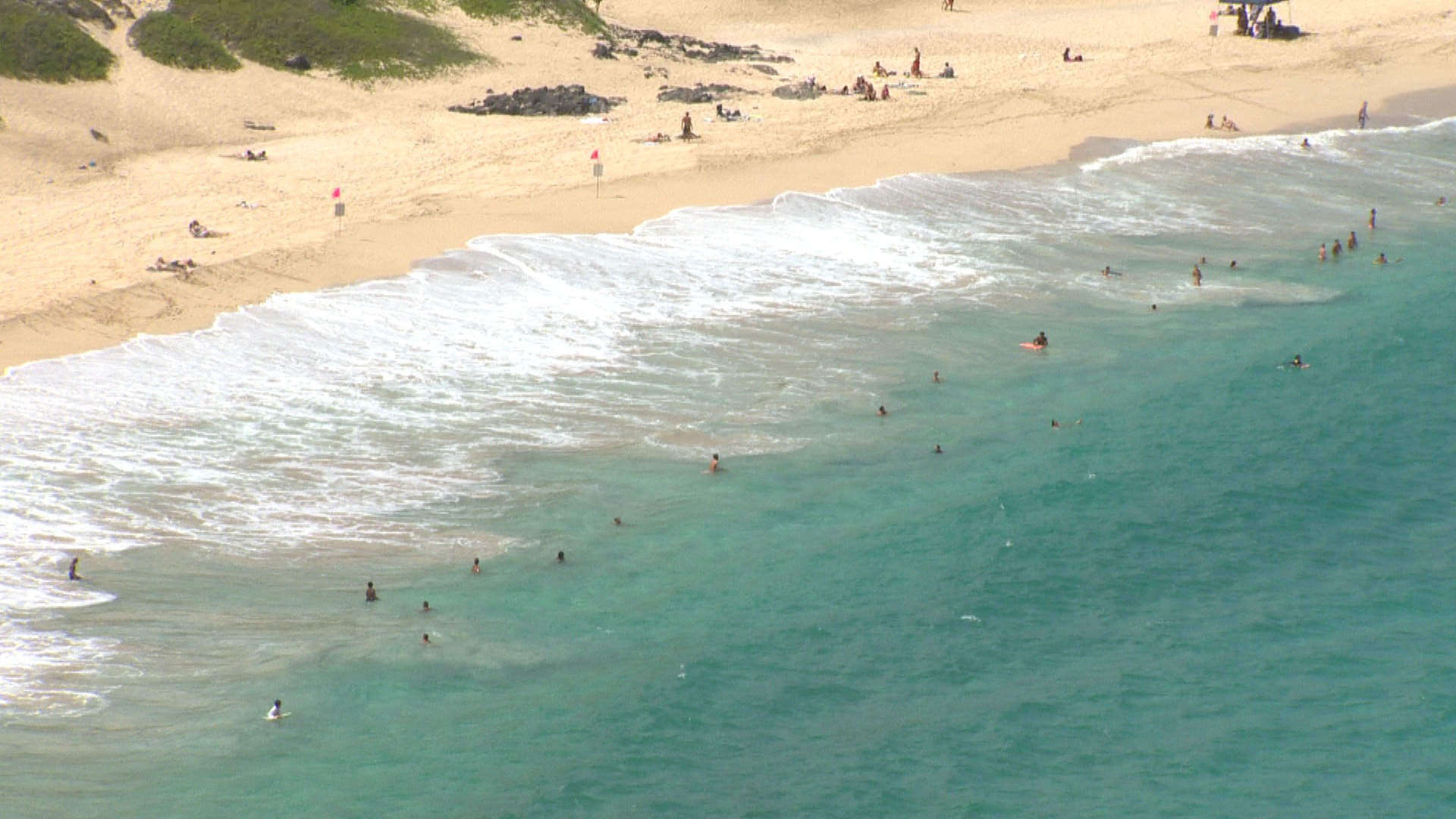 A mild tsunami hit Hawaii late Saturday after a powerful earthquake off the west coast of Canada, forcing a state-wide evacuation but apparently failing to cause major damage. Shortly after, forecasters at Hawaii-based Pacific Tsunami Warning Center lifted a tsunami warning issued in the wake of the M 7.7 quake that struck off the west coast of Canada. Tourists from Waikiki to Turtle Bay in Honolulu were evacuated to higher floors in their hotels, and major tourist centers looked abandoned for several hours. This is the first time Hawaii has seen a tsunami warning triggered by an earthquake off Canada. 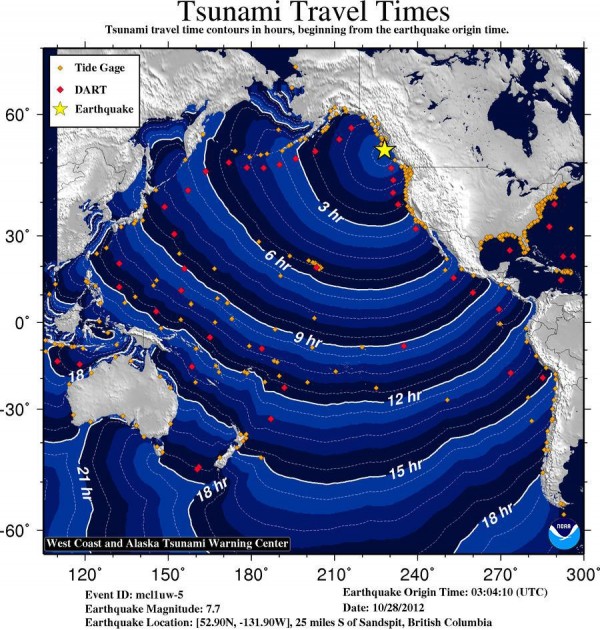 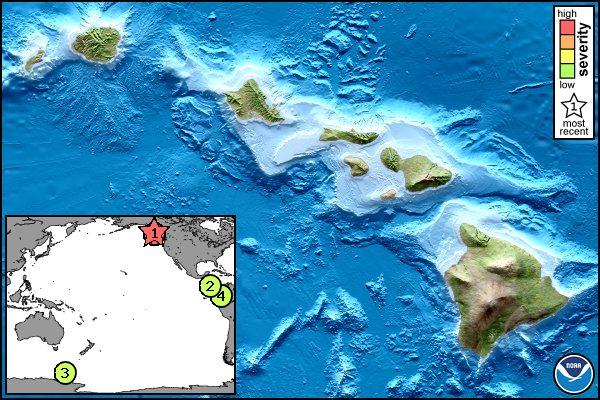 The Hawaii County Civil Defense Agency’s Emergency Operations Center was thrown into full mobilization Saturday night as the tsunami from British Columbia’s Queen Charlotte Islands approached. A tsunami warning that had been in effect for all Hawaiian Islands since just after 7:00 p.m. on Saturday has been downgraded to a tsunami advisory by the Pacific Tsunami Warning Center, allowing residents who were evacuated from coastal inundation zones to return to their homes. People living in coastal areas were urged to begin evacuating immediately, with the last people out of the evacuation zone by 9:30 p.m., an hour before the waves were first expected to arrive in Hawaii. The Pacific Tsunami Warning Center initially said there was no tsunami warning, and upgraded it at 7:40 p.m. Sirens initially sounded around 8:15 p.m.

The first tsunami waves arrived on Oahu around 10:30 p.m., but there were no initial reports of damage. Tidal gauges recorded sea level changes at Makapuu, Hanalei and Haleiwa, By 11:17 p.m., four waves had hit Hawaii, the largest at 5 feet from peak to trough at Kahului, Maui, said Gerard Fryer, a geophysicist at the Pacific Tsunami Warning Center in Ewa Beach. That means it was 2 1/2 feet above the ambient sea level. 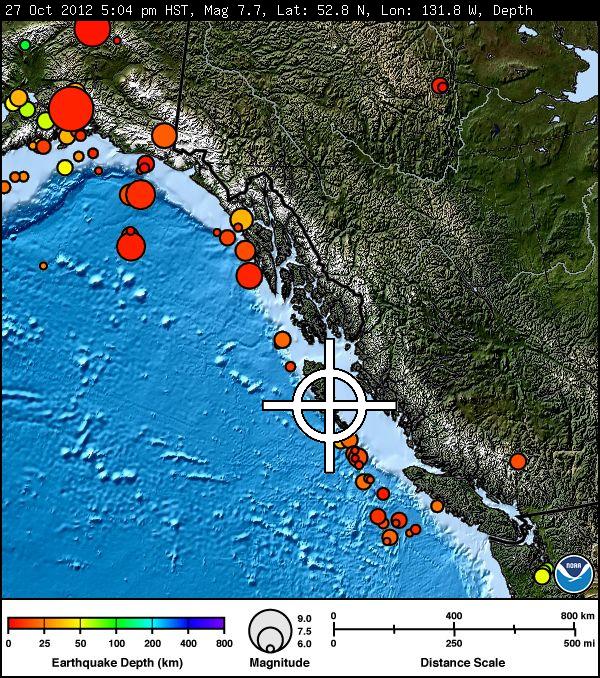 Emergency officials in British Columbia urged residents in low-lying coastal areas to be alert to instructions from local officials and be prepared to move to higher ground. Following the quake, small waves measuring 69 cm (27 inches) were reported on the north-east tip of Haida Gwaii, while parts of the north-east coast of Vancouver Island saw waves up to 55cm high. Gerard Fryer, a senior Geophysicist with the Pacific Tsunami Warning Center, said quakes exceeding magnitude 7.0 should not be taken lightly.

Numerous aftershocks, strongest measuring magnitude 6.3, followed the initial M 7.7 quake that occurred in vicinity of  Queen Charlotte Islands, 139 km (86 miles) S of Masset, Canada at depth of 17.5 km (10.9 miles). Natural Resources Canada said in a statement that the quake was felt across much of north-central British Columbia, including Haida Gwaii as the Queen Charlotte Islands are also called, Prince Rupert, Quesnel, and Houston. The Queen Charlotte Islands, which are also known by their official indigenous name of Haida Gwaii, comprise about 150 islands located north of Canada’s Vancouver Island. Their total population is about 5,000. Earthquake struck partly under an island, but mostly under shallow water. 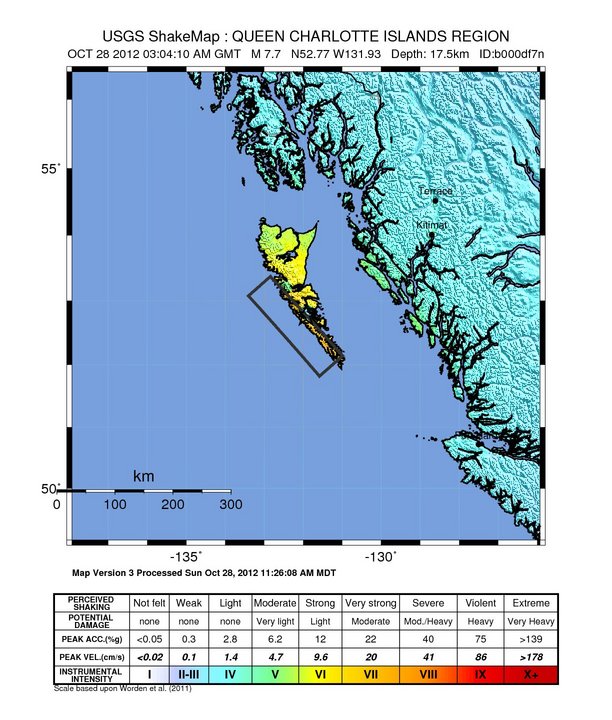 The quake was the strongest in Canada since 1970 when a 7.4-magnitude quake struck south of the Haida Gwaii. There have been five earthquakes off the Queen Charlotte Islands since 1929, according to the U.S. Geological Survey. The most recent, a magnitude 6.6, was in 2009. Canada’s largest quake since 1700 was an 8.1-magnitude quake on August 22, 1949, off the coast of British Columbia.