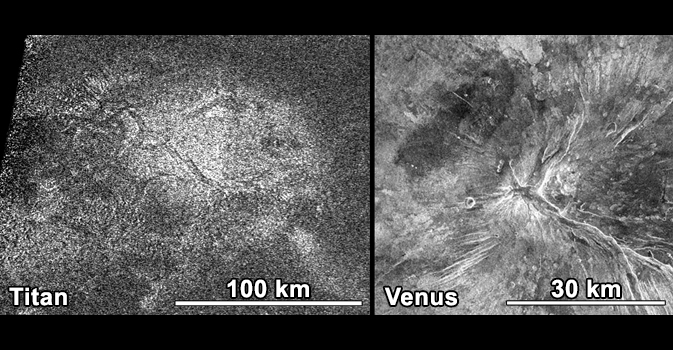 Yesterday NASA revealed some really intriguing radar images of Titan’s terrain captured by Cassini spacecraft‘s radar instrument during its May 22 flyby, which recently completed its 15 years in space. One of them depicts a giant, nearly circular mound which looks like a hot cross-shaped bun, while Other images offer evidence about stability of the hydrocarbon lakes in Titan’s northern hemisphere.

Researchers believe that 40 miles (70 kilometers) long bun like feature is a result of magma rising from beneath the Titan’s surface, lifting and fracturing it to create fissures as visible in the image. It is similar to lifting and cracking of bread by steam while baking it. Previously, similar dome-shaped terrain of about 20 miles (30 kilometers) across at the summit of a large volcano called Kunapipi Mons was noticed on Venus. Rosaly Lopes, a Cassini radar team scientist based at NASA’s Jet Propulsion Laboratory, Pasadena, California said,

“The ‘hot cross bun’ is a type of feature we have not seen before on Titan, showing that Titan keeps surprising us even after eight years of observations from Cassini. The ‘bun’ may be the result of what is known on Earth as a laccolith, an intrusion formed by magma pushing up from below. The Henry Mountains of Utah are well-known examples of this geologic phenomenon.” 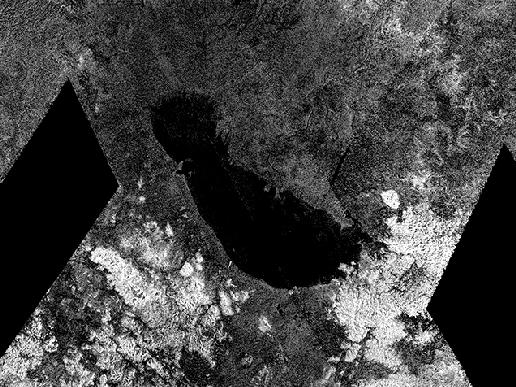 Ellen Stofan, based at Proxemy Research, Rectortown, Virginia is leading  group of Cassini scientists studying radar images of Titan’s southern hemisphere. Titan is the only place other than Earth known to have stable liquid on its surface, though the liquids on Titan are hydrocarbon rather than water. So far, vast seas have only been seen in Titan’s northern hemisphere. Findings of Stofan and colleagues based on analysis Cassini images collected from 2008 to 2011 suggests there were once vast, shallow seas at Titan’s south pole as well and they have found two good candidates for dry or mostly dry seas. One of these dry seas appears to be about 300 by 170 miles (475 by 280 kilometers) across, and perhaps a few hundred feet (meters) deep. Ontario Lacus, the largest current lake in the south, sits inside of the dry shorelines, like a shrunken version of a once-mighty sea. Stofan said,

“The seas on Titan are temporary hosts for experiments in prebiotic chemistry, and we know they are cycling from one hemisphere to the other over 100,000 years. I’d love to get a closer look at the seas of the north or these dry seabeds to examine the extent to which this prebiotic chemistry has developed.” 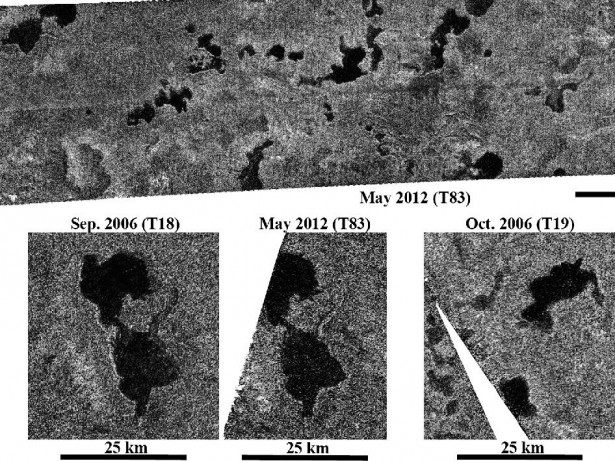 After observing Titan’s northern seas, Cassini team has confirmed their stability by looking at radar images from Cassini taken about one Titan season (equal to Earth years) apart. The newer images, from May 22, 2012, on the same flyby as the hot cross bun images, show the shorelines stayed about the same, indicating the northern lakes are not transient weather events, in contrast to the temporary darkening of parts of the equator after a rainstorm in 2010.

Cassini spacecraft, launched in 1997 and reached orbit about Saturn in 2004 with a planned mission duration of 4 years, is serving even after completing twice that duration. Recently on 15th October, Cassini spacecraft completed 15 years in space since launch.

NASA’s Cassini spacecraft obtained this image of a feature shaped like a hot cross bun in the northern region of Titan (left) that bears a striking resemblance to a similar feature on Venus (right).