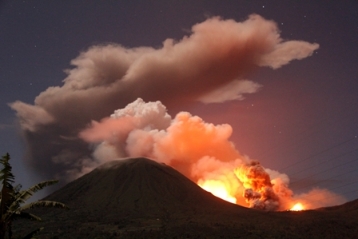 Mount Lokon volcano in northern Indonesia erupted again on Sunday, October 7, 2012 spewing smoke and ash that caused muddy rain to fall in nearby villages. Local monitoring official Farid Ruskanda Bina said to AP that the volcano rumbled as heavy rain fell around its cloud-covered crater. According to Bina the sound was heard 5 kilometers (3 miles) away but the height of the eruption was not visible. The ash made the rain thick and muddy in six villages, Bina said.

The twin volcanoes Lokon and Empung, rising about 800 m above the plain of Tondano, are among the most active volcanoes of Sulawesi.

Lokon, the higher of the two peaks ( whose summits are only 2.2 km apart), has a flat, craterless top. The morphologically younger Empung volcano has a 400-m-wide, 150-m-deep crater that erupted last in the 18th century, but all subsequent eruptions have originated from Tompaluan, a 150 x 250 m wide double crater situated in the saddle between the two peaks. Historical eruptions have primarily produced small-to-moderate ash plumes that have occasionally damaged croplands and houses, but lava-dome growth and pyroclastic flows have also occurred.