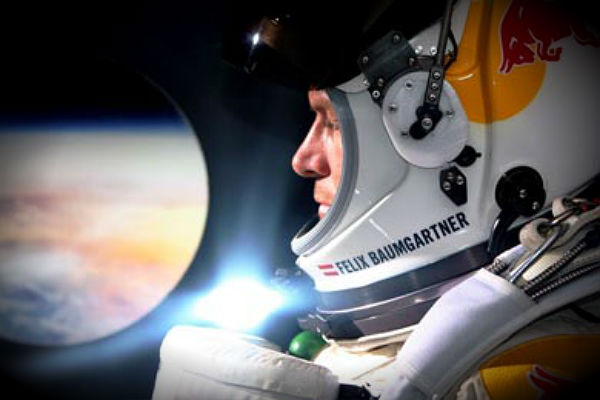 Felix Baumgartner’s jump from the stratosphere is on for October 9! Baumgartner will attempt to break the record for the longest freefall and break the sound barrier with his body.  The jump will also attempt to break highest speed in freefall, highest jump and highest manned balloon flight.

Mission dress rehearsal is successfully completed. Weather looks favorable for a launch Tuesday October 9. October 8 was the first scheduled date but the jump was postponed due to a cold front with gusty winds. Perfect weather conditions are needed for the  850.000 cubic meters (30 million cubic feet) stratospheric helium balloon flight. The wind for the launch of the 30 mcf balloon must be 3 km/h (2 mph) or less.

Red Bull Stratos reports that the space capsule Baumgartner will used has been passed high-altitude simulation testing after it was damaged in July’s final practice jump, and a launch date has been set for October 9 in Roswell, New Mexico. The  1.315 kilograms (2,899 pounds) heavy capsule was damaged in a hard landing after Baumgartner’s final test jump from  29,610 meters (97,146 feet) in July when Baumgartner was freefalling at speeds of up to 536 mph / 864 kilometers per hour.

The animated video below, provides a sense of what to expect during the attempt.

Felix Baumgartner, 43-year-old Austrian BASE jumper and extreme athlete, will jump from nearly 37 km (23 miles, 120,000 feet) to break the current jump record held by Joe Kittinger, a retired Air Force officer, who jumped from 31,500 meters (31.5 km, 19.5 miles, 102,000 ft) in 1960. Kittinger, at age of 83,  is now assisting Baumgartner in preparations for the jump. Baumgartner and the Red Bull Stratos team have been preparing for years to break the record for highest-altitude jump. The central aim of the project is to collect valuable data for science that could ultimately help improve the safety of space travel and enable high-altitude escapes from spacecraft.

The Red Bull Stratos team will webcast the freefall attempt. Felix Baumgartner’s flight up to 120,000 ft (36,576 meters) advanced high-definition cinematography cameras will beam real-time images of his every move in the Red Bull Stratos space capsule. This point of view will provide viewers with a real life perspective of the spectacular vista outside. And when Felix jumps, he’ll be wearing five high-definition cameras for his descent.

In addition to documenting the record-breaking jump his experience will also be captured by powerful long-range and infrared cameras on the ground, as well as by a helicopter hovering near his flight path. The live stream of Felix’s jump will be available here, on partner sites and carried by more than 50 TV and Internet channels around the globe, in advance of a BBC documentary this fall. (© Red Bull GmbH.)

Covered from takeoff to touchdown by more than 35 cameras in the air and on the ground, the live online broadcast will provide a firsthand experience of the entire mission.