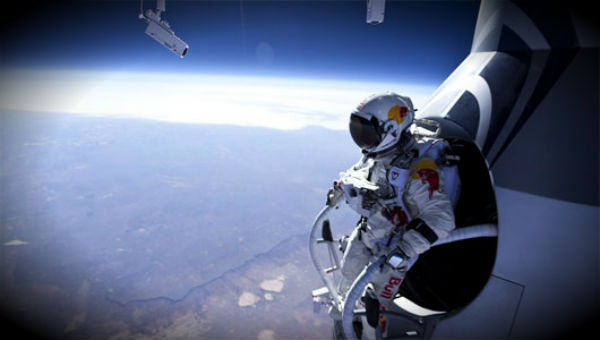 Austrian skydiver Felix Baumgartner took a practice jump from space in preparation for his actual record-breaking jump from 36,500 meters (120,000 feet) which is scheduled for this summer (according to Red Bull Stratos, the ‘launch window’ for the big jump opens in July and extends until the beginning of October). Another test jump is planned, from 27,400 meters (90,000 feet) before attempting the full lenght. Felix Baumgartner could become the first person to go supersonic outside a vehicle. He hopes to not only break the sound barrier with his body, but also break the record for the longest freefall.

In preparation for his Red Bull Stratos mission, Baumgartner rode his specially-made pressurized capsule via a helium balloon and jumped from an altitude of 21,818 meters (71,581 feet/13.5 miles) from the skies near Roswell, New Mexico. The Red Bull Stratos Mission posted the video of the preparations and post landing while actual jump is being saved for a documentary about the mission that is being done by the BBC and National Geographic. This freefall lasted 3 minutes 43 seconds, reaching a top speed of 586 kph (364 mph). Baumgartner deployed his parachute at 2,405 meters (7,890 feet), by far the highest jump he has ever made, said Red Bull officials.

“I thought that I had to pull the parachute, then I looked at the altitude and realized that I’m still at 50,000 feet,” Baumgartner said in a press release.

Besides Baumgartner, Joe Kittinger and Eugene Andreev are only two persons that have jumped from above 70,000 feet. The current jump record is held by Kittinger (a retired Air Force officer) who jumped from 31,500 meters (19.5 miles) in 1960.

Joe Kittinger jumped from an altitude of 31,200m (102,800ft) setting several records, some of which remain unbroken. Here bellow is the video fro short rememrance of that historic event.