According to NASA's annual analysis of surface temperatures across the globe, 2012 was the ninth warmest year since 1880 and it continued a long-term trend of rising global temperatures. With the exception of 1998, the nine warmest years in the 132-year record have all occurred since 2000, with 2010 and 2005 ranking as the hottest years on record. The record dates back to 1880 because that is when there were enough meteorological stations around the world to provide global temperature data.

The annual analysis of surface temperatures released by NASA's Goddard Institute for Space Studies in New York on January 15, 2013 shows that local and regional changes can be more extreme than the global average figures.

2012 was an extreme year for the Arctic and North America, with temperatures exceeding 3 °C above the average for NASA's baseline period of 1951 to 1980.

To visualise how temperature has changed around the globe, New Scientist issued excellent interactive map of the entire historical temperature record from the NASA analysis. 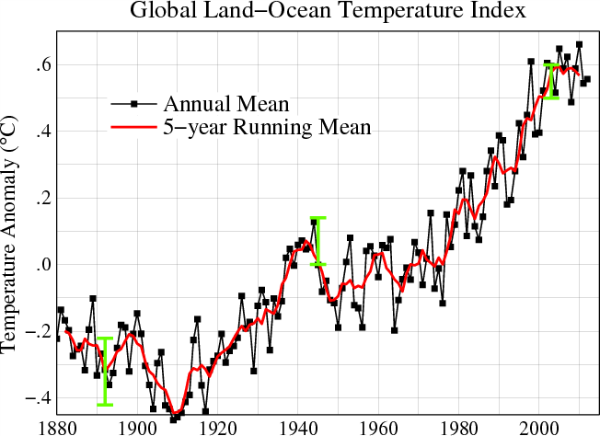 Line plot of global mean land-ocean temperature index, 1880 to present, with the base period 1951-1980. The dotted black line is the annual mean and the solid red line is the five-year mean. The green bars show uncertainty estimates (Credit: NASA/GISSTEMP) 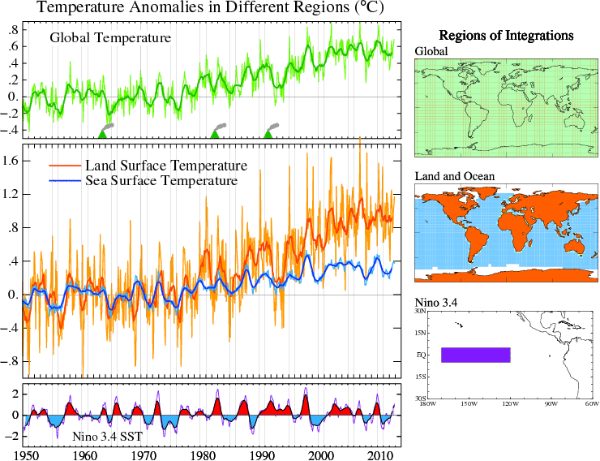