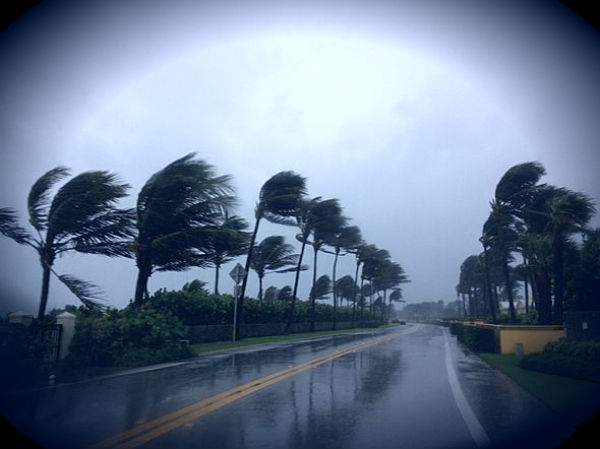 Center of Tropical Storm Isaac is passing just south of Key West, Florida. Smith Shoal light  near Key West reported a wind gust to 70 mph (113 km/h) and Virginia Key reported a wind gust to 66 mph (106 km/h). Heavy rain is falling in the Keys and southern Florida already. Total rainfall accumulations of 4 to 7 inches, with maximum amounts of 10 inches possible across the Florida Keys and the southern half of the Florida Peninsula.Tropical Storm Isaac may produce flooding in low-lying areas.

Isaac lashed the Florida Keys as a tropical storm on Sunday, bringing rain and strong winds. Preparations have begun farther north as forecasters warn Isaac could be a strong Category 2 hurricane by the time it reaches the Gulf Coast. The center is expected to move away from the Florida Keys tonight, move over the eastern Gulf of Mexico on Monday and approach the northern Gulf Coast on Tuesday. Heavy rain, gusty winds and isolated tornadoes remain a concern as Isaac moves through. 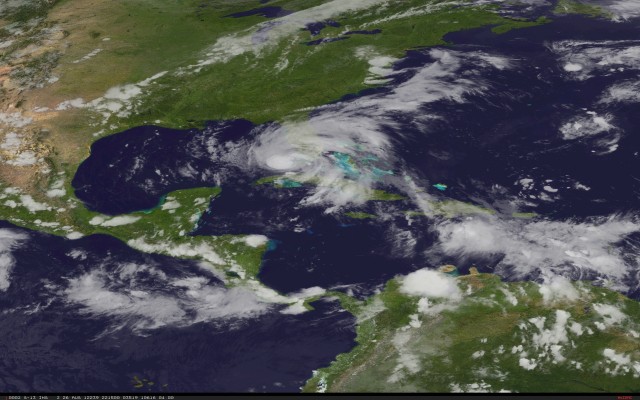 According to latest public advisory issued by US National Hurricane Center on August 26 at 21:00 UTC, the center of Tropical Storm Isaac was located near latitude 24.2 north and longitude 82.3 west. Isaac is moving toward the west-northwest near 16 mph (26 km/h) and a gradual turn toward the northwest with a decrease in forward speed is expected over the next 48 hours.

Maximum sustained winds are near 60 mph (95 km/h) with higher gusts. Some strengthening is forecast during the next 48 hours and Isaac is expected to become a hurricane in a day or two. Tropical storm force winds extend outward up to 205 miles (335 km) from the center. Estimated minimum central pressure is 992 mB.

There is still a well-established upper-level outflow pattern over the system and vertical shear should remain fairly light for the next couple of days. Intensification still seems likely as Isaac moves over the eastern Gulf. The dynamical models

show the tropical storm/hurricane gradually turning to the right and heading for a break in the subtropical ridge. However, there are substantial differences among the most reliable models as to where Isaac might cross the northern Gulf Coast.

It is important not to focus on the exact forecast track due to forecast uncertainties and the fact that significant hazards extend well away from the center.

A Hurricane Warning is in effect for east of Morgan City Louisiana to Destin Florida, including metropolitan New Orleans, Lake Pontchartrain and Lake Maurepas. A Hurricane Warning means that hurricane conditions are expected somewhere within the warning area, and in this case within the next 24 hours. Preparations to protect life and property should be rushed to completion.

A Hurricane Watch is in effect for east of Destin to Indian Pass Florida. A Hurricane Watch means that hurricane conditions are possible within the watch area. A watch is typically issued 48 hours before the anticipated first occurrence of tropical-storm-force winds – conditions that make outside preparations difficult or dangerous.

A Tropical Storm Warning is in effect for the Florida Peninsula from Sebastian Inlet southward on the East Coast and from Tarpon Springs southward on the West Coast, Florida Keys, including the Dry Tortugas and Florida Bay, Lake Okeechobee and east of Destin Florida to the Suwannee River. A Tropical Storm Warning means that tropical storm conditions are expected somewhere within the warning area within 36 hours.

After impacting the Florida Peninsula, Isaac will head for a Gulf Coast landfall during the first half of the week ahead. Isaac is forecasted to remain at tropical storm status as it moves through the central Gulf of Mexico before finally strengthening as it approaches the coast and become a category 2 hurricane just before landfall. Substantial rain, hurricane force winds and tidal surge are expected. Tropical Storm Isaac will make landfall just east of the New Orleans area, at the Louisiana-Mississippi border.

Total rainfall amounts of 5 to 10 inches, with maximum amounts of 15 inches, are possible along the eastern and central Gulf Coast. The combination of a storm surge and the tide will cause normally dry areas near the coast to be flooded by rising waters.

The deepest water will occur along the immediate coast in areas of onshore flow. Surge-related flooding depends on the relative timing of the surge and the tidal cycle and can vary greatly over short distances. The surge will be accompanied by large and dangerous waves near the coast.

Isolated tornadoes are possible over central and southern Florida though tonight. Dangerous surf and rip current conditions will continue to affect the central and northwestern Bahamas, central Cuba, the Florida Peninsula and the Florida Keys during the next couple of days.

The water could reach the following depths above ground if the peak surge occurs at the time of high tide: