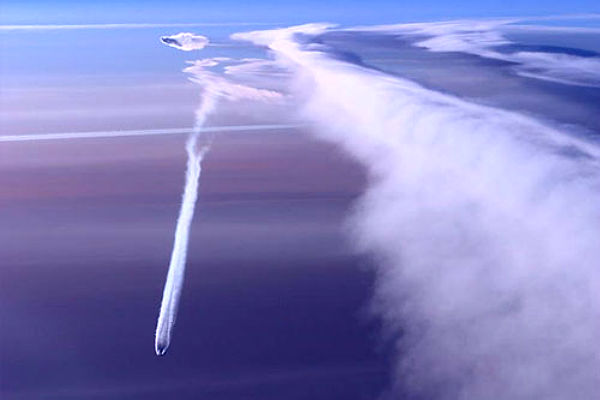 A controversial idea about shooting salt water high into the sky over the oceans to create clouds that reflect sunlight, is now reconsidered again in order to battle global warming. Rob Wood, physicist at University of Washington, proposes an experiment to test the concept on a small-scale. A comprehensive paper was published this month in the journal Philosophical Transactions of the Royal Society. Wood urges scientists to consider the idea of marine cloud brightening. Marine cloud brightening is part of a broader concept known as geoengineering which encompasses efforts to use technology to manipulate the environment. 25 other scientists have endorsed the idea. However, despite increasing interest from scientists like Wood, there is still strong resistance to cloud brightening.

The theory behind so-called marine cloud brightening is that adding particles of sea salt to the sky over the ocean would form large, long-lived clouds which could reflect light back into universe. Seeding marine stratocumulus clouds with copious amounts of tiny sea water particles could theoretically significantly enhance cloud droplet number concentration, and thereby cloud reflectivity and longevity. Since there is a limited amount of water in the air, adding more particles creates more, but smaller, droplets. A greater number of smaller drops has a greater surface area, so it means the clouds reflect a greater amount of light back into space, creating a cooling effect on Earth.

The amount of sunlight reflected also depends on several factors, including the distribution of injected aerosols, ambient levels of water vapor and pollution, and the timing of aerosol injections (because cloud brightening is only meaningful in the daytime). PNNL-NOAA study team found that adding aerosols changes the amount of rain falling from clouds, which is an important result because changes in rainfall and other climate variables may have even larger impacts than changes in temperature alone.

The idea behind the marine cloud brightening (MCB) geoengineering technique is that seeding marine stratocumulus clouds with copious quantities of roughly monodisperse  sub-micrometre seawater particles could significantly enhance the cloud droplet number concentration thus increasing the cloud albedo and longevity – thereby producing a cooling, which computations suggest could be adequate to balance the warming associated with a doubling of atmospheric carbon dioxide. 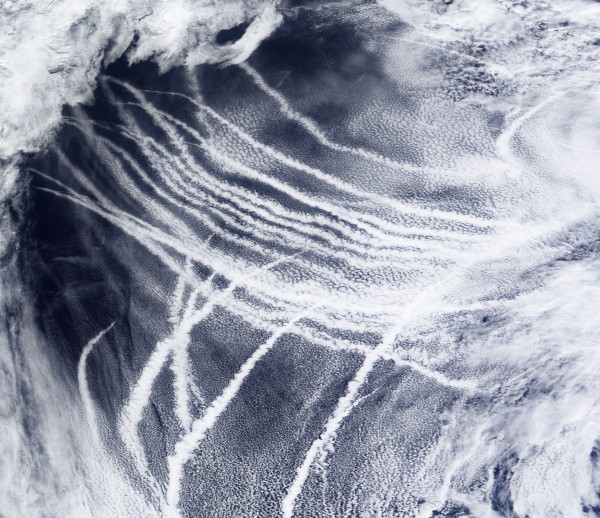 Climate model simulations suggest that if the droplet concentration in marine stratocumulus can be increased to several hundred droplets per cm3 in a significant fraction of the stratocumulus sheets, then, in principle, a negative forcing can be produced, sufficient to offset doubled CO2 and maintain the polar sea-ice coverage at roughly current values. If this was achieved, the global distributions of surface temperature and sea-ice cover would inevitably be different from the present situation. Some of the potential unintended consequences are shifting weather patterns or effects on Arctic sea ice.

Wood and his research team proposed trying a small-scale experiment to test the feasibility and begin to study effects. The test should start by deploying sprayers on a ship or barge to ensure that they can inject enough particles of the targeted size to the appropriate elevation. An airplane equipped with sensors would study the physical and chemical characteristics of the particles and how they disperse. By using additional airplanes to study how the cloud develops and how long it remains. The final phase of the experiment would send out five to 10 ships spread out across a 100-kilometer stretch. The resulting clouds would be large enough so that scientists could use satellites to examine them and their ability to reflect light.

Located in the boundary layer, the lowest level of the earth's atmosphere, marine stratocumulus clouds cover vast areas of the ocean surface. When aerosol particles from ship exhaust enter these clouds, tell-tale "ship tracks" are visible in satellite images.

There are 25 authors on the paper, including scientists from the University of Leeds, University of Edinburgh and the Pacific Northwest National Laboratory. The lead author is John Latham of the National Center for Atmospheric Research and the University of Manchester, who pioneered the idea of marine cloud brightening.

Back in 20120, Bill Gates announced plans to invest $300,000 into research at the University of Calgary which propose lab tests on machines that suck up seawater and spray it into the air, seeding white clouds that reflect rays of sunlight away from Earth. San Francisco-based research group Silver Lining, developed the machines which can suck up ten tons of water per second and turn seawater into tiny particles that can be shot up over 3,000 feet in the air, increasing the density of clouds by increasing the amount of nuclei contained within. The Silver Lining Project is a not-for-profit international scientific research collaboration to study the effects of particles (aerosols) on clouds and the influence of these cloud effects on climate systems.