Dust poured off the coast of Africa and over the Atlantic Ocean on in mid-July, 2012. A broad plume of dust blows to the southeast, crossing both Western Sahara (north) and Mauritania (center). As it passes over the Atlantic Ocean, the plume appears to broaden and thin as it covers the Cape Verde Islands. The air over Senegal, to the south, remains relatively clear. (MODIS) 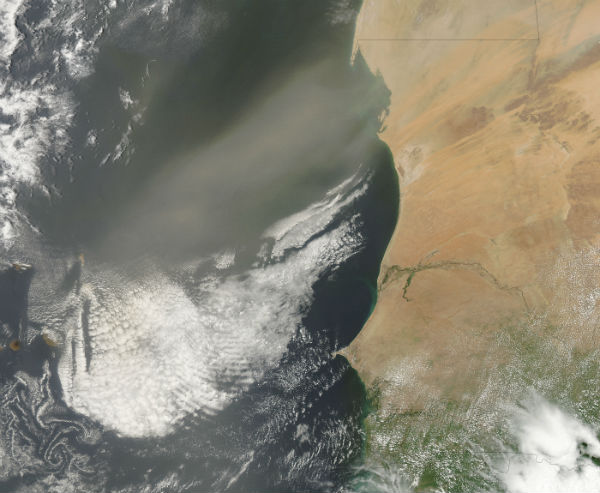 Incessant monsoon rainfall has triggered floods and multiple landslides in several districts of Bagmati Pradesh and Gandaki Pradesh, Nepal, from Wednesday to Friday, July 8 to 10, 2020. The police confirmed at least 12 fatalities-- including three children, and 19...

More than 10 m (32 feet) of snow accumulated in parts of southern Norway by July, according to the BKK energy company, who is conducting clearing operations to prevent flooding in the mountains. The region is currently so cold that the snow is hardly melting, but...

Tropical Storm "Fay" formed at 21:00 UTC on July 9, 2020, just off the coast of North Carolina, U.S. as the 6th named storm of the 2020 Atlantic hurricane season. The center of Fay is forecast to move near the Mid-Atlantic coast today and move inland over...

The destructive hailstorm that hit Calgary on June 13, 2020, has officially been declared the fourth costliest natural disaster in the history of Canada, with insured damages hitting almost 1.2 billion dollars. Last month, a massive weather system moved through...

A rare meteotsunami formed in the Upper Chesapeake Bay in Virginia on Monday, July 6, 2020. It occurred as intense storms moved through the region, which included hail and strong winds. The National Weather Service (NWS) in Mount Holly confirmed the weather...

An unseasonal low-pressure system brought isolated showers and thunderstorms to Cyprus, mainly in the mountains and inland, on Wednesday, July 8, 2020. Cyprus Department of Meteorology chief Kleanthis Nicolaides said the weather left experts puzzled as such systems...

A new tropical cyclone is organizing off the coast of North Carolina, U.S. on July 9, 2020. Environmental conditions are conducive for development, and a tropical or subtropical cyclone will likely form later today or tonight -- NHC gives it 80% chance of formation...