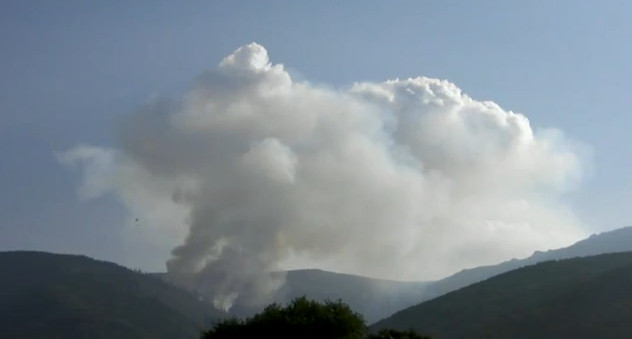 Vitosha mountain massif on the outskirts of Sofia, the capital of Bulgaria is burning for several days now and the fire can be seen from the center of Sofia.

Until now mainly dry forests and dead vegetation is burning but the situation in the fire area might to be getting worse. Fears are that the fire will cover young forest in biosphere reserve Bistrishko Branishte. Bistrishko Branishte (Бистришко бранище) is a nature reserve on Vitosha Mountain with surface area of 1061.6 ha.

Two helicopters and 350 firefighters were fighting the flames yesterday. The mountainous terrain and strong winds that constantly changes direction impede their work. More firefighters and equipment is expected today.

So far the fire does not descend to populated areas on the outskirts of Sofia.

The terrain is extremely difficult to enter, it’s a protected area and there are many fallen trees and bushes between them. Because of the heavy movement firefighters decided to extinguish the fire mainly from the air.

Efforts will be directed towards doing clean corridors in the woods to limit the outbreak in the region.  If the situation changes more specialized aircraft will help.

It’s interesting that this is happening several days after the President returned the new law for Forests to be reviewed by Parliament. There were mass protests by the citizens against the new law which they did not see suitable.

Initial reports said that the fire may have been the result of carelessness by tourists.