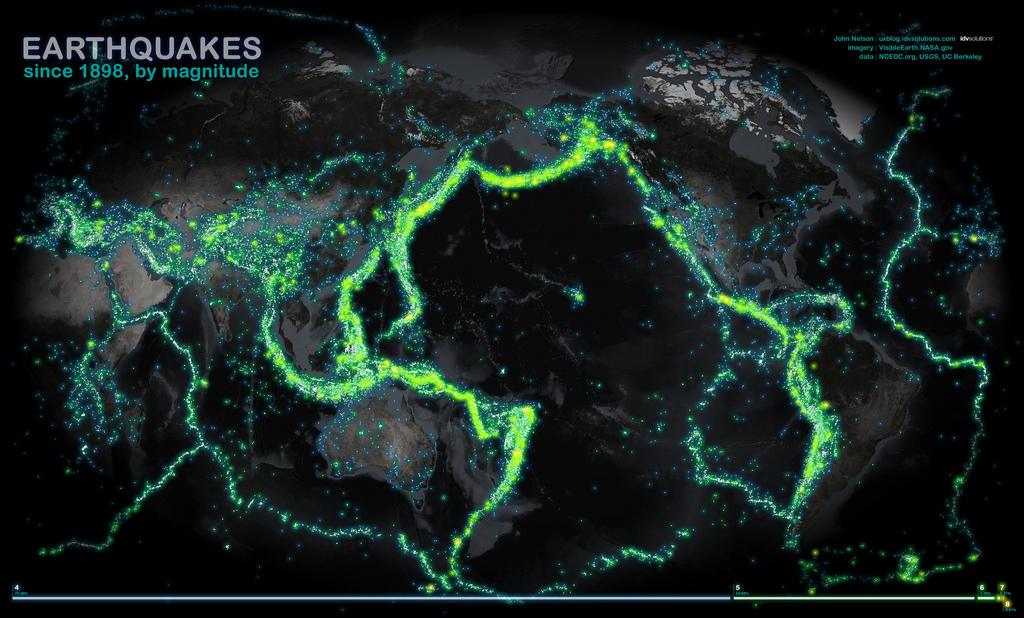 A new map plots more than a century’s worth of nearly every recorded earthquake. The map shows earthquakes of magnitude 4.0 or greater since 1898; each is marked in a lightning-bug hue that glows brighter with increasing magnitude. In all, 203,186 earthquakes are marked on the map, which is current through 2003. And it reveals the story of plate tectonics itself.

The overall effect is both beautiful and arresting, revealing the silhouettes of Earth’s tectonic boundaries in stark, luminous swarms of color.

The long volcanic seams where Earth’s crust is born appear as faint, snaking lines cutting through the world’s oceans. The earthquakes along these so-called spreading centers tend to be rather mild. The best studied spreading center, called the Mid-Atlantic Ridge, bisects the Atlantic Ocean, on the right side of the image.

Its Pacific counterpart wanders along the eastern edge of the Pacific Ocean, cutting a wide swath offshore of South America. Another spreading center makes a jog though the Indian Ocean and up through the Red Sea.

But one glance at the map shows that the real earthquake action is elsewhere. 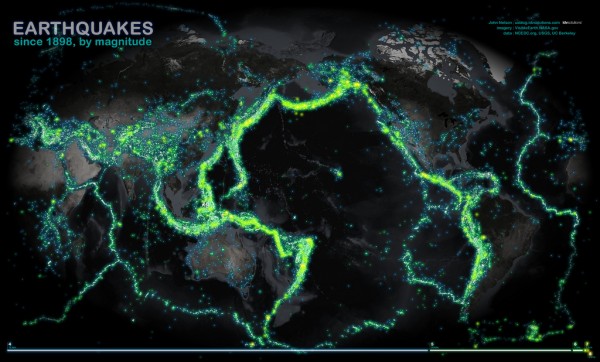 Subduction zones, the places where tectonic plates overlap and one is forced to dive deep beneath the other and into the Earth’s crushing interior – a process that generates the biggest earthquakes on the planet  – stand out like a light show. This concept hit home particularly for the Ring of Fire, the vast line of subduction zones around the northern and western edge of the Pacific Ocean. Unlike many maps made in the United States, this one is centered over the Pacific Ocean.

The map’s maker is John Nelson, the user experience and mapping manager for IDV Solutions, a data visualization company. All the earthquake information and maps are freely available on the Internet courtesy of the U.S. Geological Survey, university and state partners in California, and NASA.