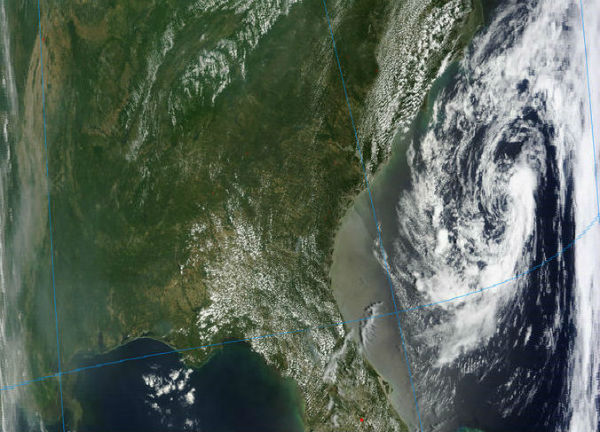 Subtropical Storm Beryl is forecast to make landfall near Jacksonville, Florida late Sunday night. The storm formed on May 25  in the Atlantic, about 300 miles east of Charleston, South Carolina. Beryl formed off the South Carolina coast late on Friday and is the second named storm of the Atlantic hurricane season, which has had an early start. The season officially runs from June 1 to Nov. 30.

Beryl is currently a subtropical storm, but is expected to become a tropical cyclone Sunday. At this time, Beryl is not forecast to become a hurricane. Maximum winds are 75 km/h (45 mph) and only slight strengthening is expected over the next 48 hours. 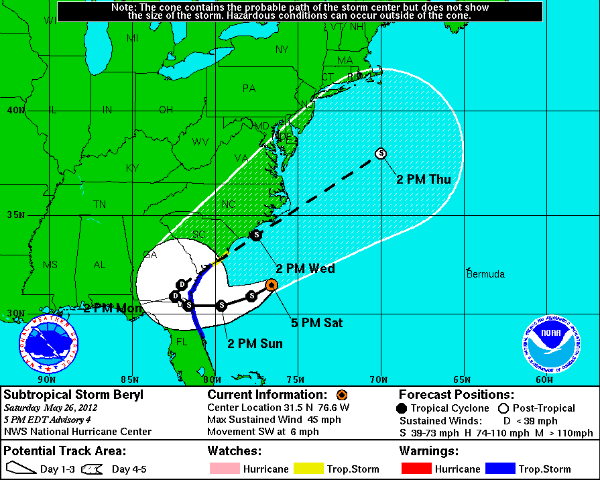 On May 26, at 21:00 UTC, the center of Beryl was located at latitude 31.5N, longitude 76.6W, about 305 km (220 miles) east-southeast of Charleston, South Carolina and 505 km (315 miles) east-northeast of Jacksonville, Florida. Beryl is moving southwest at 9 mph, and a turn to the west is expected Sunday. The National Hurricane Center estimates only an 8% chance of reaching hurricane intensity by landfall. Minimum central pressure is 999MB.

A tropical storm warning is in effect from the Brevard/Volusia county line on Florida’s east coast, north through Edisto Beach, SC. Rainfall of 2 to 4 inches is likely from northeastern Florida to southeastern North Carolina. A storm surge of 1 to 3 feet is possible near and to the north of where the center crosses the coast. Dangerous surf conditions are possible from northeastern Florida through central North Carolina. 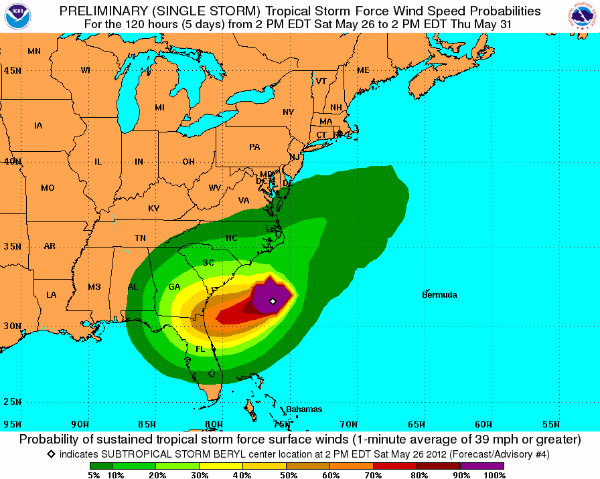 Meanwhile, in the eastern Pacific, hurricane Bud approached within 80 miles of Manzanillo on the southwestern coast of Mexico with 75 mph winds Friday. By this morning, Saturday, May 26, Bud was downgraded to a tropical storm, and then to a depression with 35 mph maximum winds just as it reached the coast near Cabo Corrientes. Bud weakened to a depression as it neared Cabo Corrientes, Jalisco, Mexico and is now drifting north.