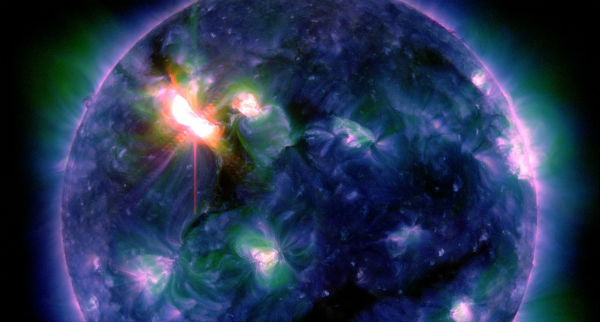 Massive sunspot AR1429 has unleashed another major X-class solar flare on March 7th at 00:28 UTC. This one is the strongest yet,  ranked as X5,4. It is the second strongest solar flare  of Cycle 24 in terms of X-Ray Flux. This eruption hurled a bright CME into space. First-look data from STEREO-B are not sufficient to determine if the cloud is heading for Earth.  A glancing blow to our planet’s magnetosphere is possible on March 8th or 9th.

This was followed shortly thereafter by an X1.3 event at 01:14 UTC. A coronal mass ejection will likely result and due to the sunspots more geoeffective position, there will be a chance for some sort of impact. 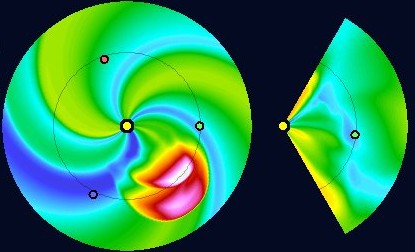 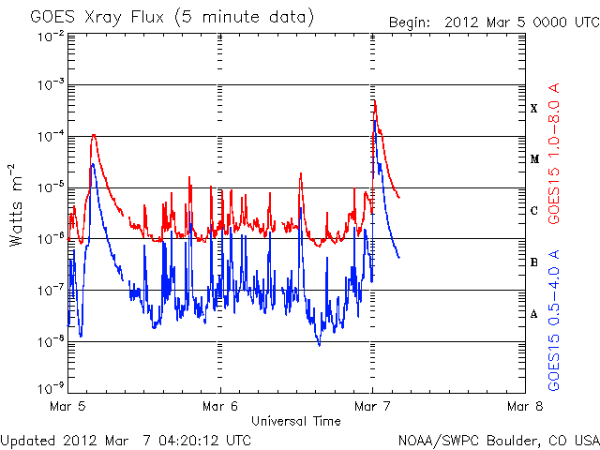 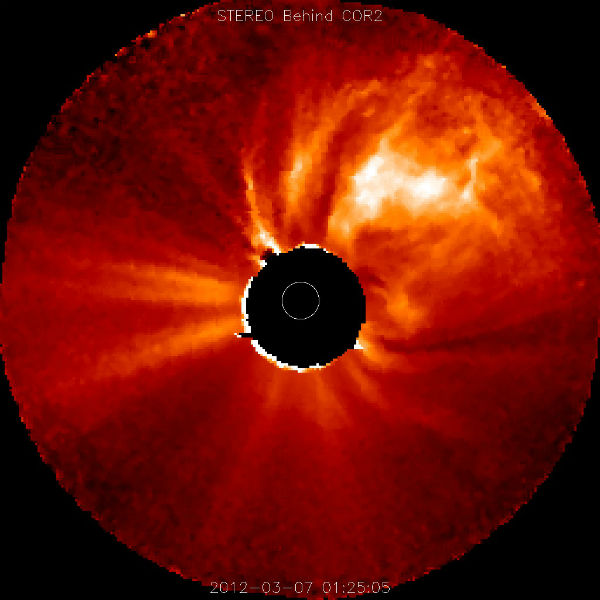 This major event  triggered a strong R3 Level Radio Blackout. A coronal mass ejection will likely result and due to the sunspots more geoeffective position, there will be a chance for some sort of impact. The solar wind is showing a sudden increase from 360 km/s to 440 km/s and the IMF is currently tilting sharply south. This could be a glancing blow impact from an earlier CME. Be on the lookout for Aurora at high latitudes. 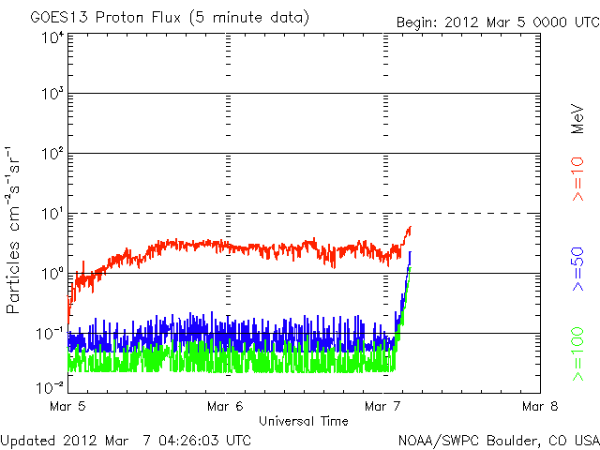 A bright Coronal Mass Ejection (CME) is seen in the new STEREO Behind COR2 images. High energy proton levels are now on the rise and a radiation storm is imminent. Type II emissions occur in association with eruptions on the sun and typically indicate a coronal mass ejection is associated with a flare event. 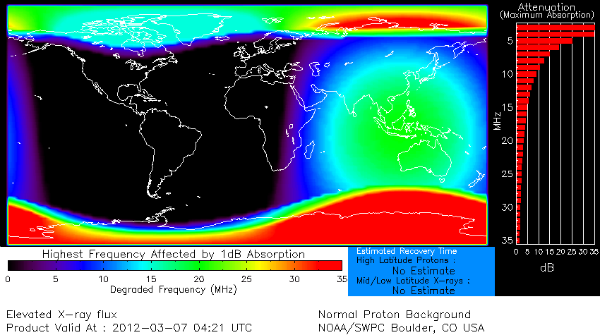 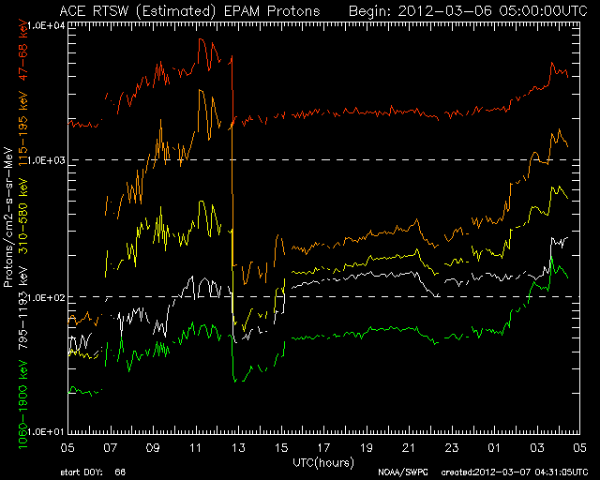 The CME that erupted late on March 4 passed ACE around 0400 UTC March 7 (11:00 p.m. EST March 6). Look for G1 (minor) Geomagnetic Storm activity in the next few hours. Another CME, part of the recent R3 (strong) Radio Blackout event at 0024 UTC March 7 (7:24 p.m. EST March 6) is forecast to pass ACE about one day hence. Predictions are still being refined on this one. Finally a Solar Radiation Storm is now building as the higher energies are showing a response to the recent eruption. The S1 (minor) threshold should be surpassed in the next few hours. (NOAA/SWPC)

Solar Activity Forecast: Solar activity is expected to be moderate. Additional M-class events from Region 1429 are likely. There is also a chance for a major flare and/or proton producing event from Region 1429 during the next three days (07-09 March).

Geophysical Activity Forecast: The geomagnetic field is expected to be unsettled to active with a chance for minor storm periods during the next 24 hours (07 March). The increase in activity is expected due to combined effects from a co-rotating interaction region with the CME that occurred on 04 March (associated with the M2 x-ray event). Later in the day additional effects are expected due to a glancing blow from the full halo CME associated with the X1 x-ray event that occurred on 05 March. Predominantly unsettled levels with a chance for active periods are expected for the second day (08 March) as effects from the anticipated disturbance should diminish. Predominantly quiet levels are expected for the third day (09 March).