A recent study, appearing online in the Journal of Geophysical Research on February 29, 2012, has found clear evidence on Venus for a type of space weather outburst quite common at Earth, called a hot flow anomaly. These anomalies, also known as HFAs, cause a temporary reversal of the solar wind that normally moves past a planet. An HFA surge causes the material to flood backward, says David Sibeck, a scientist at NASA’s Goddard Space Flight Center in Greenbelt, Md., who studies HFAs at Earth and is a co-author on the paper.

“Hot flow anomalies average one a day near Earth,” says Goddard scientist Glyn Collinson and the first author on the new paper. “They’ve been seen at Saturn, they may have been seen at Mars, and now we’re seeing them at Venus. But at Venus, since there’s no protective magnetic field, the explosion happens right above the surface of the planet.”

The search for this kind of space weather on Venus began in 2009 when NASA’s Messenger satellite, which is actually a mission to study Mercury, spotted what may well have been an HFA at Venus. But Messenger’s instruments could only measure a suggestive magnetic signature, not detect the temperature of the material inside, a necessary measurement to confirm the heat of a “hot” flow anomaly. For further evidence, Collinson turned to a European Space Agency spacecraft called Venus Express. Venus Express was not designed to study space weather phenomena per se, but it does have instruments that can detect magnetic fields and the charged particles, or plasma, that make up the solar wind. Collinson began to search for the telltale signatures of an HFA through a few days worth of data.

“They are an amazing phenomenon,” says David Sibeck. “Hot flow anomalies release so much energy that the solar wind is deflected, and can even move back toward the sun. That’s a lot of energy when you consider that the solar wind is supersonic – traveling faster than the speed of sound – and the HFA is strong enough to make it turn around.“

In the grand scheme of the solar system, Venus and Earth are almost the same distance from the sun. Yet the planets differ dramatically: Venus is some 100 times hotter than Earth and its days more than 200 times longer.  There’s another difference, too. Earth has a magnetic field and Venus does not – a crucial distinction when assessing the effects of the sun on each planet. 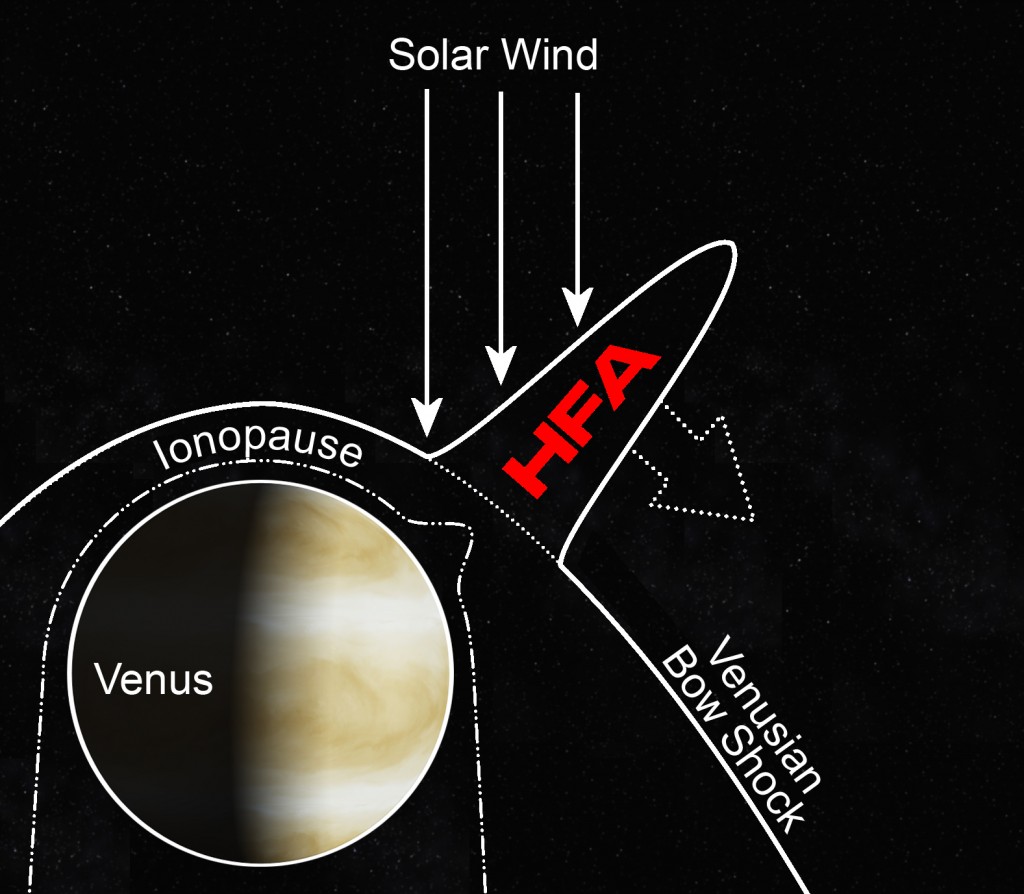 HFAs are caused by discontinuities in the solar wind, the million-mph flow of charged particles that streams from the sun. Sometimes these discontinuities — areas where the wind’s magnetic fields change direction sharply and abruptly — align with the wind’s flow. In this case, they remain in contact with the bow shock, the place where the solar wind slows down quickly and diverts around a planet or other large body.

If such a discontinuity travels slowly across the bow shock, it traps lots of solar particles, collecting pools of super-hot plasma that can expand to be as big as Earth.

By taking the Venus Express data and comparing it to the known physics at Earth, the scientists painted a possible picture of how an HFA forms at Venus. The moving solar wind with its attendant magnetic fields harbors discontinuities, areas where the magnetic fields change direction, sharply and abruptly. Sometimes these discontinuities align with the flow of the solar wind, so they remain in contact with what’s called the bow shock – the place where the supersonic solar wind slows down abruptly and diverts around the planet. If such a discontinuity travels slowly across the bow shock it allows time to trap particles, collecting pools of 10 million degree plasma that can expand to be as big as Earth.

“These plasma particles are trapped in place,” says Sibeck. “They make a big puddle that gets bigger and bigger, sending out its own shock waves. Everything downstream from that bubble is going to be different than what’s upstream.”

Those downstream disturbances are what make HFAs interesting. These eruptions create global disturbances far beyond the mere local disruption of a hot plasma explosion. These eruptions of solar material can compress the entire magnetosphere around Earth for minutes at a time, shaking the particles along magnetic lines and causing them to fall into Earth’s atmosphere near the magnetic poles to create dayside aurora.

Understanding what the HFAs do in the non-magnetized Venusian environment, of course, would require direct observations that the current data sets from Venus Express do not provide. However Collinson and his colleagues have made some educated guesses. “At Earth, HFAs have a big effect, but don’t necessarily rule the roost,” says Collinson. “But at Venus, since the HFA happens right up next to the planet, it is going to have a more dramatic effect on the system.”