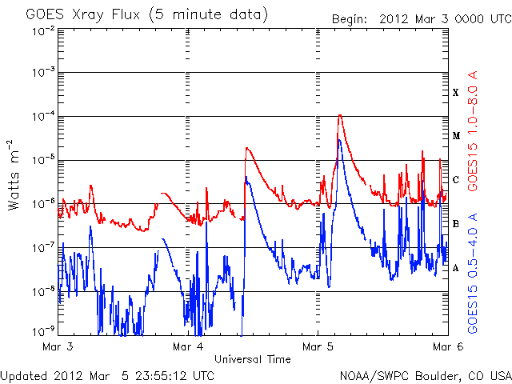 An X1-class solar flare erupted on March 5th at 04:13 UTC and hurled a bright CME into space. The expanding plasma cloud is mostly heading towards the north and east, however a small portion looks to be Earth directed. Mercury and Venus are on its path. This is the 10th largest solar flare of the current Sunspot Cycle and it also happens to be the 10th X-Class flare as well. It is the second X-class sun storm of 2012. The first event occurred on Jan. 27 and registered as an X1.7 on the space weather scale used by astronomers. 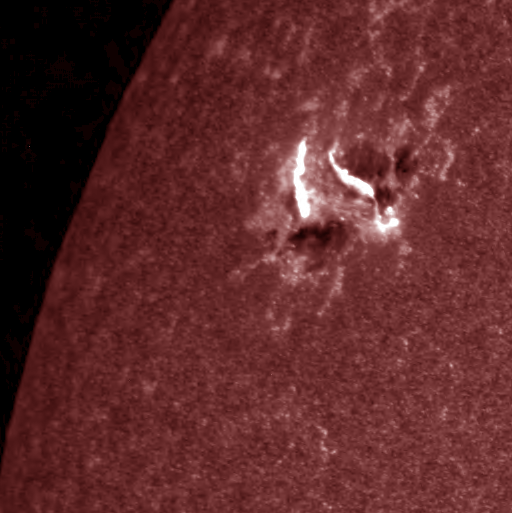 Another CME was produced by an M2-class eruption from the same sunspot on March 4th. This CME cloud is expected to deliver a glancing blow to our planet's magnetic field on March 6th at 04:30 UTC. Look at animated forecast track for the likely progression of the cloud. When the CME from X-class flare arrives at Earth over the next day or two, the planet might already be in the midst of a geomagnetic storm.

The geomagnetic field is expected to be unsettled to active for day 1 (06 Mar) due to combined effects from the M2/CME event observed on 04 March and a favorably positioned coronal hole high speed stream. Active conditions with a chance for minor storm periods are forecast for the second day (07 Mar) due to an expected glancing blow from X1/full halo CME. Predominantly unsettled levels are expected for the third day (08 Mar).

Recent activity from Region 1429 has caused an elevated level of solar protons near Earth. It is expected that the protons will continue to slowly increase, reaching the S1 (minor) Solar Radiation Storm category in the next 24 hours. In addition, although the trajectory of the CME from early on March 5 is expected to largely miss earth, there may be isolated G1 (minor) Geomagnetic Storm levels from late March 6 thru March 7 (UTC). The responsible party for this activity, NOAA Region 1429, is capable of more of the same as it rotates nearer mid-disk. 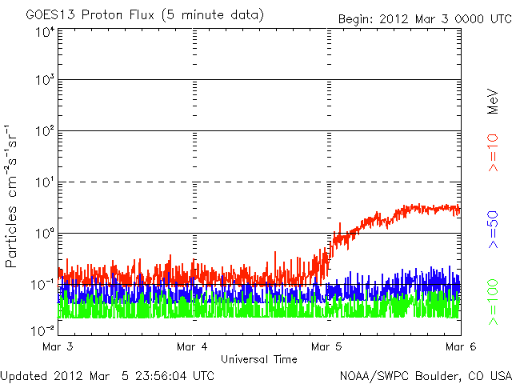 According to NOAA/SWPC 3-day Solar-Geophysical Forecast, Solar activity is expected to be moderate, but there is a chance for additional major flare activity and/or a greater than 10 MeV proton event from Region 1429.

As 1429 continues to rotate into a more geoeffective position, the chances for Earth directed explosions will increase. NOAA/SWPC forecasters give 75% chance for M-class event and 30 % chance for X-class event in the next 24 hours. 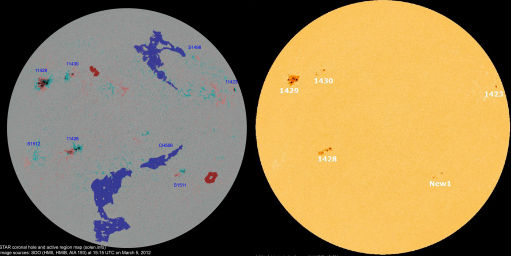 New Sunspot 1430 was numbered on Sunday and is located to the west of 1429. A fast growing Sunspot located in the southwest quadrant should be numbered 1431 on Monday. 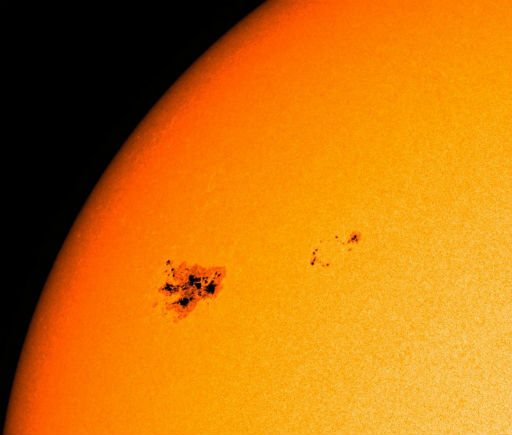 Solar flares happen when the powerful magnetic fields in and around the sun reconnect. They’re usually associated with active regions, which we call sunspots, where the magnetic fields are strongest. Flares are classified according to their strength. The smallest ones are B-class, followed by C, M and X, the largest. Similar to the Richter scale for earthquakes, each letter represents a ten-fold increase in energy output. So an X is 10 times an M and 100 times a C. Within each letter class, there is a finer scale from 1 to 9. Although X is the last letter, there are flares more than 10 times the power of an X1, so X-class flares can go higher than 9.

C-class flares are too weak to noticeably affect Earth. M-class flares can cause brief radio blackouts at the poles and minor radiation storms that might endanger astronauts. The most powerful flare on record was in 2003, during the last solar maximum. It was so powerful that it overloaded the sensors measuring it. They cut-out at X28. A powerful X-class flare like that can create long lasting radiation storms, which can harm satellites and even give airline passengers, flying near the poles, small radiation doses. X flares also have the potential to create global transmission problems and world-wide blackouts.