Severe snow storms have descended on Southern Europe since Wednesday, prompting warnings of very cold weather in Russia, the Baltic States, Poland, Scandinavia and other countries. According to the meteorological services in those countries the temperature will fall to  -20 - or even lower – for at least one week. Russian authorities seem to be particularly concerned because every winter hundreds of people die in Russia from exposure to low temperatures. This part of Europe is not unused to cold, but the current freeze, which spread to most of the region last week, came after a period of relatively mild weather. Many were shocked when temperatures in some parts plunged Monday to minus 20 Celsius.

Freezing temperatures have already killed more than 36 people across central and eastern Europe. At least ten people have died in Poland where the cold plunged to minus 26 degrees celsius. Meanwhile in Ukraine, eighteen people have died of hypothermia while as many as 500 people sought medical treatment for cold-related conditions. Polish forecasters have warned that temperatures could fall further during the week, to below -20C during the day and -30C at night.  In the Czech capital of Prague, city authorities worked to set up tents for an estimated 3000 homeless people. Freezing temperatures also damaged train tracks, slowing railway traffic.

In Bulgaria, a state of emergency was declared in all but three of the country’s 28 districts. With snowdrifts reaching five feet high, most roads in the districts of Ruse, Razgrad, Silistra are impassable, and the only bridge over the Danube, which links the Bulgarian Ruse to Giurgiu Romania, is closed. Three districts in the central and northeast of the country declared a state of natural disaster, and the Danube city of Ruse is practically cut off from the rest of the country. Bulgaria's main Black Sea port of Varna was closed for traffic due to windstorms and heavy snowfall, port officials said. The heavy snow forced authorities to close several mountain passes as well as many schools.

In Romania, local media reported four people had died after snowstorms and icy weather swept the country. Bucharest and a further 17 counties in eastern and southern Romania are currently under a meteorological warning orange code, for snow and blizzards. Four Romanian Black Sea ports, including the largest commercial port in Constanta were closed on Thursday due to the heavy snow, as was the Bulgarian port of Burgas. (watch the video) 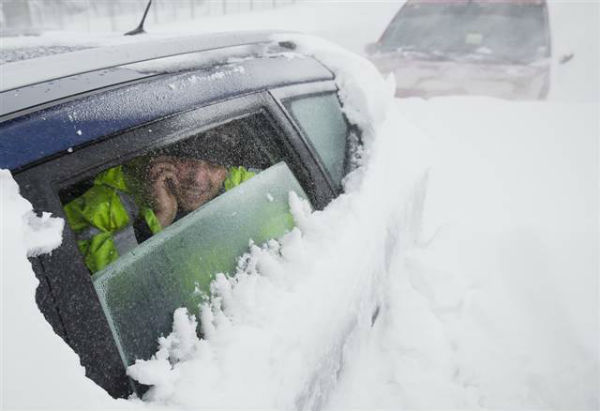 Southern and central Serbia were also badly hit. Many villages were cut off due to the snowfall, and some residents had a difficult time feeding their animals.  Thousands were left without electricity, while railway traffic was halted in many areas. In 14 municipalities a state of emergency is declared. In the last two days three people were found dead.

Further west, in the Swiss resort of Davos, which is currently hosting the annual World Economic Forum, there were snowbanks some six feet high lining the streets and snow clearing machines working all over town.

The temperature in Turkey's province of Kars, which borders Armenia, dropped to minus 25 C on Sunday night.

Last week the massive ice storm hit Washington, US. The massive ice storm that downed thousands of towering firs and pines, snapped power lines and left nearly a quarter-million people without electricity. The historic ice storm also shut down all three runways at Sea-Tac airport, forced cancellation of almost 400 flights, and left much of Washington’s capital, Olympia, without power, including the Governor’s office, legislative buildings and other state agencies

The National Weather Service reported Waterloo, Iowa, US received 7.1 inches of snowfall on Friday, breaking a record for Jan. 20 of 3 inches set in 1904. Waterloo normally averages 7.5 inches of snow each December, while the norm for January is 8.2 inches.

China is freezing at temperatures reaching minus 45 degrees Celsius. Freezing rain continued in southern Guizhou province, disrupting travel in Shaanxi and Hubei as well as Chongqing Municipality. Temperatures fall  to minus 30 C (-22 F) in northeastern China. In Shanxi, west of Beijing, a bus collision killed seven after snow blanketed most of the province and forced closure of a dozen highways. In Xinjiang, 448 people and 80 vehicles were stranded in a sudden blizzard. Temperatures in the city of Genhe, Inner Mongolia Autonomous Region, north China, reached minus 45 degrees Celsius on Wednesday. Streets were mostly empty as residents stayed indoors to avoid the cold. Meanwhile, a moderate cold front will sweep the country's central and eastern regions from Jan. 31 to Feb. 2, decreasing temperatures by up to 10 degrees Celsius. The cold front will also bring strong winds to Inner Mongolia as well as the country's northeastern and northern regions according to China Meteorlogical Agency.

Kuwait has experienced uncommonly cold weather as temperature dropped below freezing in many areas according to Kuwait Meteorology Center. Temperatures dropped to -3C in West Salmi, -2C in north Abdaly, and 3C at Kuwait International Airport. Temperature reached below freezing in desert areas, the center noted. An extremely cold period is commonly known in Kuwait as “Izairig”.

Last week snow fell in the province of Bechar in the Sahara Desert in western Algeria. Bechar is located in the northern Sahara, about 36 miles south of the Moroccan border. Strong wind blew the snow across roads and buildings. (watch the video)

A strong paroxysmal event took place at Klyuchevskoy volcano on January 18, 2021. Explosions sent ash up to 7.5 km (24 600 feet) a.s.l., with eruptive cloud drifting 500 km (310 miles) W of the volcano. According to Yury Demianchuk from Russia's volcanological...

Earthquake swarm in the vicinity of El Chichon volcano, Mexico

The American Meteor Society (AMS) camera system captured a swarm of 7 bright meteors of unknown origin within just 3 seconds of one another at 11:50 UTC on January 18, 2021. Five of the seven meteor paths intersected in an area just east of the 3rd magnitude star...

An international team of researchers reconstructed the Sun's 11-year cycles all the way back to year 969 using measurements of radioactive carbon in tree rings. The findings help scientists better understand the dynamics of the Sun, enabling more accurate dating...

Mayon volcano in Albay, Philippines exhibited a slight increase in abnormal behavior over the past 48 hours, the Philippine Institute of Volcanology and Seismology (Phivolcs) Lignon Hill Observatory reported on Thursday, January 21, 2021. The volcano's...

Around 2 300 homes have been evacuated overnight Thursday, January 21, 2021, amid widespread flooding and dangerous snow across parts of the United Kingdom brought by Storm Christoph. The storm prompted more than 200 flood warnings, with five of them severe, and has...

Powerful M7.1 earthquake hits off the coast of Mindanao, Philippines

A bright fireball was seen and recorded over Japan at 11:32 UTC on January 20, 2021 (20:32 JST). The object was seen for several seconds over wide areas of Japan, including Kanto, Tokai, and Kinki. Fujii Daichi, a curator who specializes in astronomy at the...