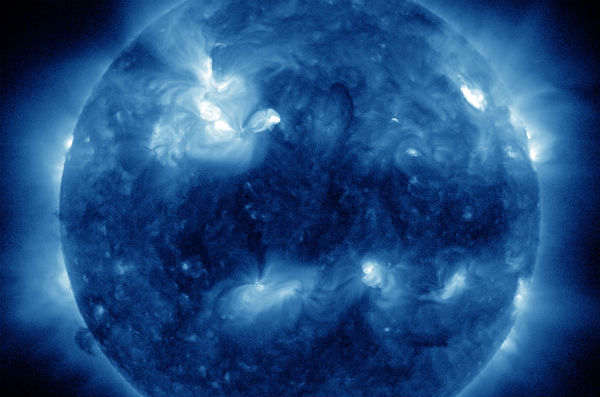 Recently formed sunspot 1401 awoke yesterday afternoon and produced an M1.7 solar flare at 19:12 UTC. AR 1401 has a Beta-Gamma magnetic configuration which could lead to further solar flares. NOAA forecasters estimate a 15% to 20% chance of polar geomagnetic storms during the next 24 hours in response to a possible glancing blow from a CME. High-latitude sky watchers should be alert for auroras.

There are no large coronal holes on the Earthside of the sun but there are two active regions facing Earth with a Beta-Gamma magnetic configuration which could lead to further solar flares. AR1401, has a “beta-gamma” magnetic field that harbors energy for M-class solar flares. At the moment it is unleashing one such flare every day. Eruptions from AR1401 will become increasingly geoeffective in the days ahead as the sun’s rotation aligns the active region with our planet. 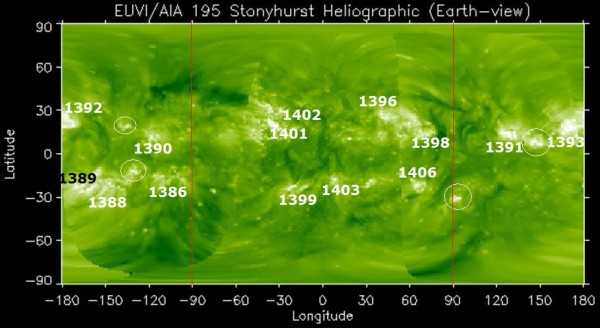 A small eruption was visible above Sunspot 1399 in the southern hemisphere this morning. It appears to have produced a Coronal Mass Ejection (CME). For now, it looks to be directed to the south but with new data we will see if its heading toward our planet.

Nearly 500,000 km long plasma-filled magnetic filaments is rising over the sun’s northwestern limb. These events can be observed with backyard solar telescopes. Magnetic instability in this prominence could result with solar flare events. Right now, a coronal mass ejection (CME) that took place on Jan 16, is heading mainly for Venus but it might deliver a glancing blow to our planet on Jan. 19th. High-latitude sky watchers should be alert for auroras.

Earth’s atmosphere has been puffing up in response to increasing levels of UV radiation from sunspots. A puffed up atmosphere helps clean up low-Earth orbit from space junk. In the absence of a new major satellite breakup, the overall orbital debris population should continue to decrease during 2012 and 2013

Solar Activity Forecast: Solar activity is expected to be at predominately low levels with a chance for M-class activity for the next three days (19 – 21 January).

Active sunspot 1401 erupted again on Jan. 19th, between 15:15 and 16:30 UT. The long-duration blast produced an M3-class solar flare and a CME that appears to be heading toward Earth.

NASA’s twin STEREO spacecraft recorded an impressive CME emerging from the blast site: movie #1, movie #2. Analysts at the Goddard Space Weather Lab confirm that the CME is heading for Earth, and they say strong geomagnetic storms are possible (although not guaranteed) when the cloud arrives this weekend. Their animated forecast track predicts an impact on Jan. 21st at 22:30 UT (+/- 7 hrs).