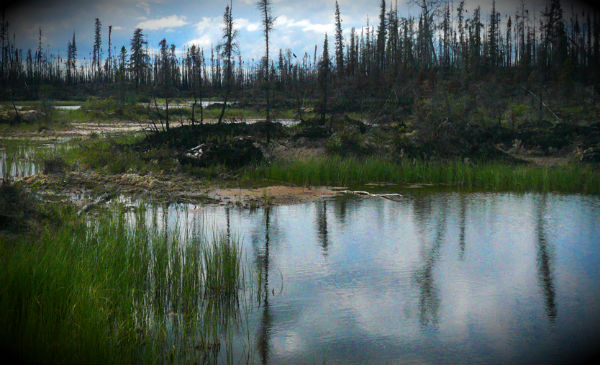 Researchers from NASA’s Jet Propulsion Laboratory and the California Institute of Technology in Pasadena, Calif., investigated how Earth’s plant life is likely to react over the next three centuries as Earth’s climate changes in response to rising levels of human-produced greenhouse gases. A new NASA and university computer modeling study reveals that by 2100, global climate change will modify plant communities covering almost half of Earth’s land surface and will drive the transformation of nearly 40 percent of land-based ecosystems. The researchers found a shift of major ecological community types or biomes, toward Earth’s poles – most dramatically in temperate grasslands and boreal forests – and toward higher elevations. The study predicts climate change will disrupt the ecological balance between interdependent and often endangered plant and animal species, reduce biodiversity and adversely affect Earth’s water, energy, carbon and other element cycles. The study introduces a new view of climate change, exploring the ecological implications of a few degrees of global warming. Study results are published in the journal Climatic Change.

Most of Earth’s land that is not covered by ice or desert is projected to undergo at least a 30 percent change in plant cover -changes that will require humans and animals to adapt and often relocate. Many plant and animal species will face increasing competition for survival, as well as significant species turnover, as some species invade areas occupied by other species. Threaten plant species often must “migrate” over multiple generations, as they can only survive, compete and reproduce within the range of climates to which they are evolutionarily and physiologically adapted. While Earth’s plants and animals have evolved to migrate in response to seasonal environmental changes and to even larger transitions, such as the end of the last ice age, they often are not equipped to keep up with the rapidity of modern climate changes that are currently taking place. Human activities, such as agriculture and urbanization, are increasingly destroying Earth’s natural habitats, and frequently block plants and animals from successfully migrating. 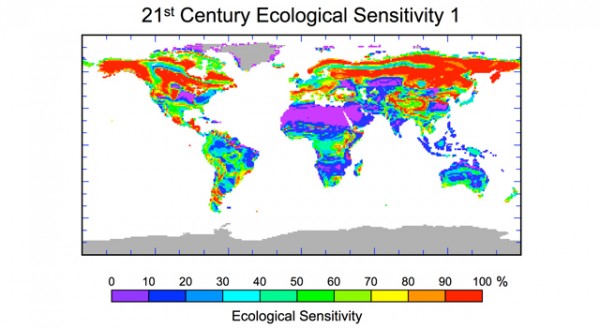 The scientists used a computer model that predicts the type of plant community that is uniquely adapted to any climate on Earth. This model was used to simulate the future state of Earth’s natural vegetation in harmony with climate projections from 10 different global climate simulations. These simulations are based on the intermediate greenhouse gas scenario in the United Nations’ Intergovernmental Panel on Climate Change Fourth Assessment Report. That scenario assumes greenhouse gas levels will double by 2100 and then level off.  Researchers developed and applied two new ecological sensitivity metrics – analogs of climate sensitivity – to investigate the potential degree of plant community changes over the next three centuries.
The U.N. report’s climate simulations predict a warmer and wetter Earth, with global temperature increases of 3.6 to 7.2 degrees Fahrenheit (2 to 4 degrees Celsius) by 2100, about the same warming that occurred following the Last Glacial Maximum almost 20,000 years ago, except about 100 times faster. Under the scenario, some regions become wetter because of enhanced evaporation, while others become drier due to changes in atmospheric circulation.

areas projected to undergo the greatest degree of species turnover – that were identified by the study include regions in the Himalayas and the Tibetan Plateau, eastern equatorial Africa, Madagascar, the Mediterranean region, southern South America, and North America’s Great Lakes and Great Plains areas. The largest areas of ecological sensitivity and biome changes predicted for this century are found in areas with the most dramatic climate change: in the Northern Hemisphere high latitudes, particularly along the northern and southern boundaries of boreal forests. 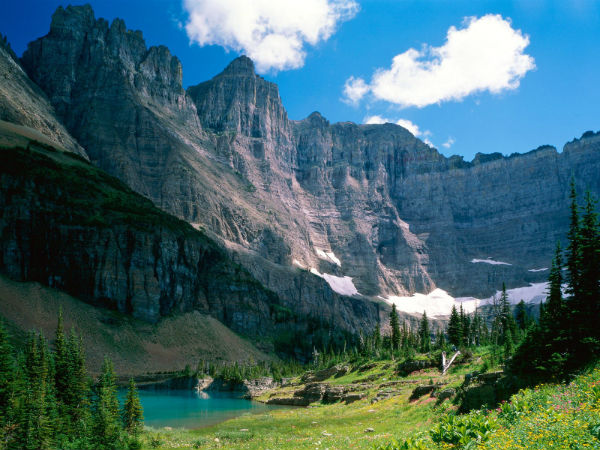 Glaciers are the visible field events of climate change, because they can have a major impact on the planets water supply. A detailed glacier inventory is critical  to assess these changes and to model their future evolution. Glaciers around the world are showing dramatic signs of retreat from global warming from Glacier National Park in Montana to the jagged peaks of the Andes to the storied peaks of Mount Kilimanjaro  and Mount Everest. (JPL/NASA)