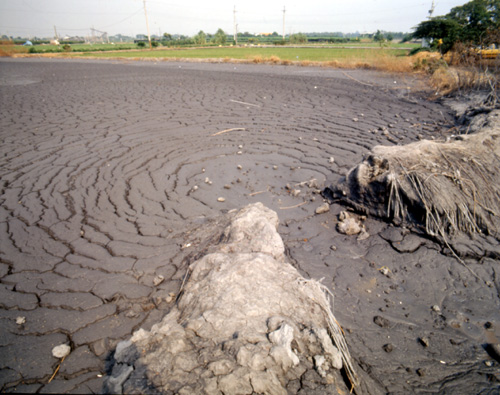 Wandan mud dome  erupted early Friday after nearly a year of inactivity is spilling mud flows of up to two meters high. The Wandan mud volcano, Pingtung County, erupted around 3 a.m. near a cemetery area, ejecting mud and releasing natural gases, according to the CNA. Up to noon Friday, hot gray mud was still spewing from the volcano in Pingtung County and residents could be seen lighting fires nearby to burn off the gases emitted by the volcano. The mud flowing from three cracks in Hsinyuan Township spread to a public cemetery and a corn field but no other damage was reported. The eruption occurred south of Wandan Township, where the first eruption in the 1720  was recorded, Taipei Times reports. 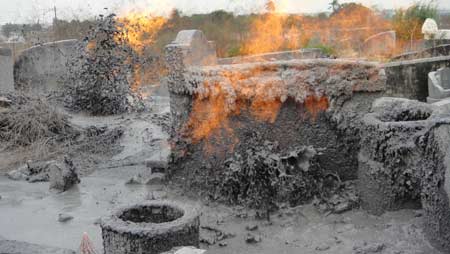 The Wandan mud volcano, one of Taiwan’s 17 active mud volcanoes was dormant for nine years between 1979 and 1988. It usually erupts once of twice a year. It last erupted on Dec. 21 in an area around the Huang Yuan Holy Temple, north of the cemetery. The eruptions have been moving south. In early years, the eruptions occurred at the peak of Liyu Hill further north from the temple. There are two active mud volcanoes in South Taiwan, and several inactive ones. The Wushan mud volcanoes are located in the Yanchao District of Kaohsiung City.

The Wandan mud volcano is located between the border of Wandan and Sinyuan, once called “Boiled Water Mountain” because yellow water sprang from it with red glow, Carp Mountain is named for its special shape. Mud volcano has been erupting from time to time and stopped for nine years in 1979. Erupting again in 1988, the eruption point moved from the mountain top to the plain. From then on, the volcano erupts once or twice every year, with the mud flowing into nearby farms.

During the Japanese colonial years, there were attempts to explore the natural gas resources in the area. The natural gases also facilitated the area’s brick making business. At the peak of the business, there were eight kilns in the area. The kilns were closed after clay sources ran out, but they have now become sites of cultural interests for tourists. The mud ejected from the volcano has also created unique geological attractions, boosting the local tourism.

Current environmental issues include: air pollution; water pollution from industrial emissions and raw sewage; contamination of drinking water supplies; and trade in endangered species. Though regulation of sulfate aerosol emissions from petroleum production is becoming stringent, acid rain remains to be a threat to the health of the residents and the forests. Scholars in Taiwan point out that more than half of its acid rain is actually brought by monsoon rains from mainland China.

Taiwan is active geologically, showing plate boundary tectonics. The island formed at the junction of the Luzon Volcanic Arc and the Ryukyu Volcanic Arc. Subduction changes direction at Taiwan. South of the island, the Philippine Sea Plate is subducting under the Sunda Plate. To the north the Philippine Sea Plate is subducting under the Okinawa Plate . The Philippines Plate is moving to the north east. The Manila Trench meets the southern tip of Taiwan. The North Luzon Trough extends into the island forming the inland Taitung Longitudinal Valley.

The Philippines Sea Plate is converging with the continent at 7 cm per year in the west north west direction. It has compressed Cenozoic sediments by around 200 km in the last 4 Ma. The piled up sediment is rising into mountains at the rate of 5 mm per year. Taiwan is a major hazard area for earthquakes. It has mud volcanoes and hot springs.

Located next to an oceanic trench and volcanic system in a tectonic collision zone, Taiwan has evolved a unique environment that produces high-temperature springs with crystal-clear water, usually both clean and safe to drink. These hot springs are not only clean and potable but also commonly used for spas and resorts.