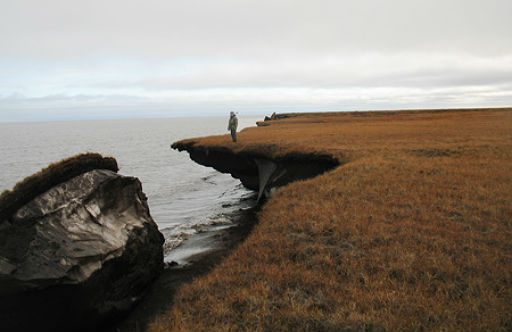 Declining sea ice in the Arctic has led to increasing erosion rates along the coast of the Beaufort Sea over the past fifty years, according to a new study led by Irina Overeem of the University of Colorado Institute for Arctic and Alpine Research (INSTAAR). Their study used a wave model driven by sea ice position and wind data causing coastal erosion. 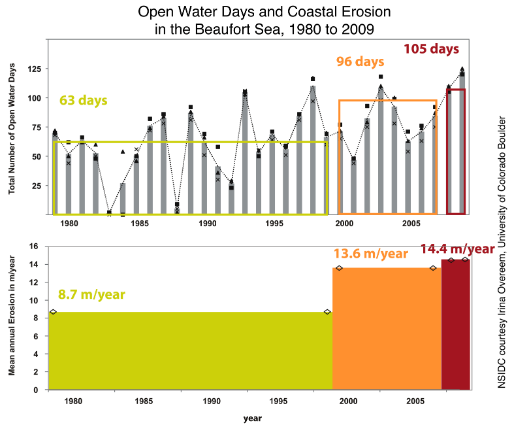 With a longer open water season, ocean water warms more and waves eat away at the coastline. The sediments comprising the coastal bluffs are locked together by permafrost—hard frozen ground with a concrete-like consistency. As the waves lap at the permafrost, they also help to thaw it, making the ground much more vulnerable to erosion. (NSIDC) 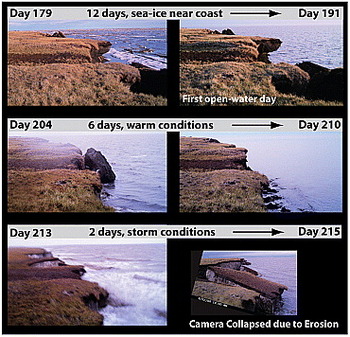 Erosion rates of permafrost coasts along the Beaufort Sea accelerated over the past 50 years synchronously with Arctic-wide declines in sea ice extent, suggesting a causal relationship between the two. A fetch-limited wave model driven by sea ice position and local wind data from northern Alaska indicates that the exposure of permafrost bluffs to seawater increased by a factor of 2.5 during 1979–2009. The duration of the open water season expanded from ∼45 days to ∼95 days. Open water expanded more rapidly toward the fall (∼0.92 day yr−1), when sea surface temperatures are cooler, than into the mid-summer (∼0.71 days yr−1).Time-lapse imagery demonstrates the relatively efficient erosive action of a single storm in August. Sea surface temperatures have already decreased significantly by fall, reducing the potential impact of thermal erosion due to fall season storm waves. (GLR/AGU) 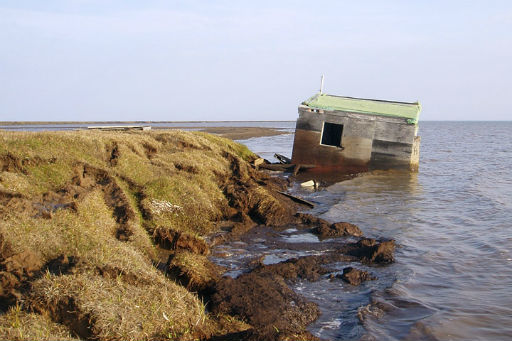